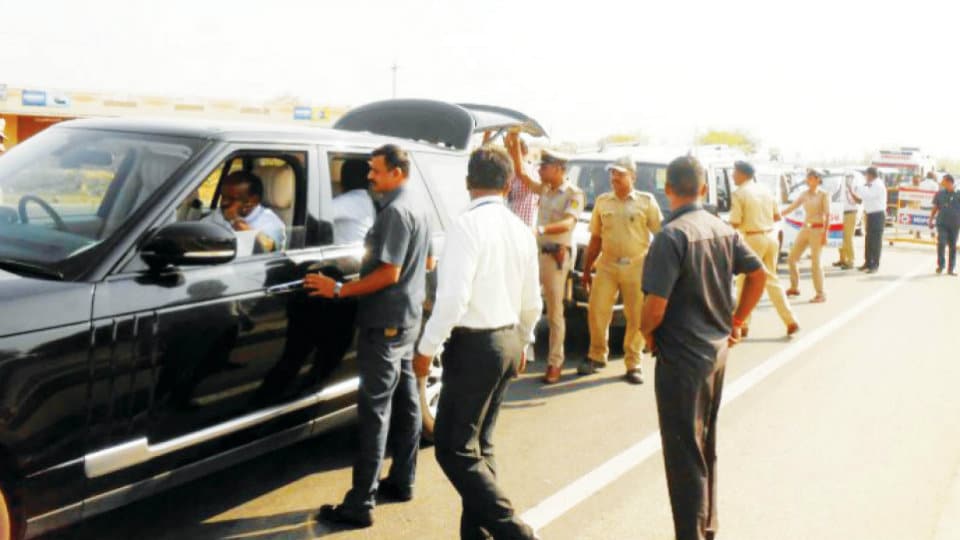 CM Kumaraswamy often checks into the hotel during his visits to Mandya district where his son Nikhil is contesting the LS elections. Even Nikhil stays in this hotel and has been conducting meetings of JD(S) legislators and party workers  there.

Yesterday at around 2 pm, more than 20 I-T officials raided the hotel and the sleuths seized CCTV footage of Kumaraswamy and Nikhil. The rooms, where they had stayed were also inspected. The officials have been staying in Mandya for over a month and are monitoring the movement of Congress and JD(S) leaders.

CM’s car stopped at election check post: On Apr. 3, Chief Minister HDK’s black SUV was stopped at a check post at Hirasave near Channarayapatna. The CM was in the front seat, resting his head on his palm and waited as two men (election officers) searched the boot.

The CM was on his way to Bengaluru via Hirasave from Shivamogga where he had gone to canvass for JD(S) candidate Madhu Bangarappa. Election officials on duty intercepted the car in which Kumaraswamy was travelling on National Highway 75. The escort vehicles of his convoy were also intercepted and inspected.

Chief Minister Kumaraswamy told the officials “Check the vehicles properly. Take pictures and video and send it to the higher officials of the Election Commission.”

Chopper ‘conspiracy’: HDK says he is forced to travel by Road

At Channarayapatna, the CM told reporters that he was finding it difficult to get choppers for his election campaigns and he is forced to go by road to address rallies. Smelling a  “conspiracy” behind this, Kumaraswamy alleged that the Centre is “misusing its power” to restrict him from campaigning by making helicopters non-available.

Sources said that under normal circumstances, two agents used to arrange choppers for the CM. “From the last one week, the agents are expressing their inability to arrange choppers. They are attributing this to non-availability as leaders from other parties and from various parts of the country have booked earlier,” said a source.

Even the Election Commission has issued stringent guidelines on the use of choppers during the poll season. The EC stipulated that expenses of using aircraft must be paid by the parties with suitable accounting.