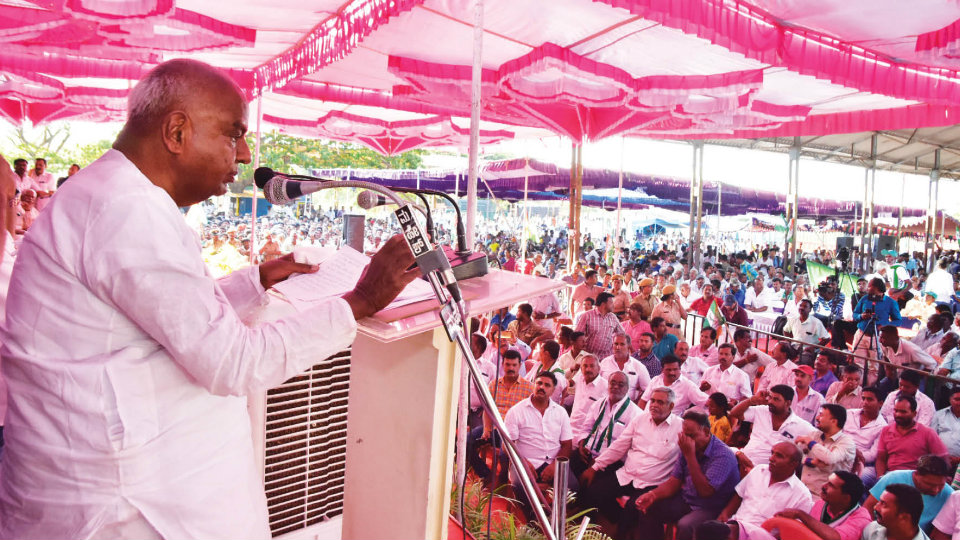 K.R. Pet: Days after the top brass of the coalition partners, JD(S) and Congress, chanted unity mantra loudly in the State Capital, JD(S) supremo and former Prime Minister H.D. Deve Gowda has said that some of the leaders of the grand-old- party have gone ‘too far’ with their agenda to defeat his grandson Nikhil Kumaraswamy in Mandya Lok Sabha seat.

Addressing a poll rally at K.R. Pet yesterday, Deve Gowda maintained that some leaders have conspired to defeat Nikhil to damage the reputation of Chief Minister H.D. Kumaraswamy. A visit by former CM Siddharamaiah to Mandya would not be of any benefit, he added.

Stating that Congress leaders should have shown greater interest in campaigning, he appealed to the youths not to be swayed by glamour and look at who actually worked for their welfare.

Deve Gowda struck an emotional chord, when he said that the fate of Nikhil rests with the voters of Mandya. The JD(S) supremo later addressed a rally at Srirangapatna, where he appealed to the voters to vote for coalition candidate Nikhil Kumaraswamy. Srirangapatna JD(S) MLA Ravindra Srikantaiah and other  leaders were present.