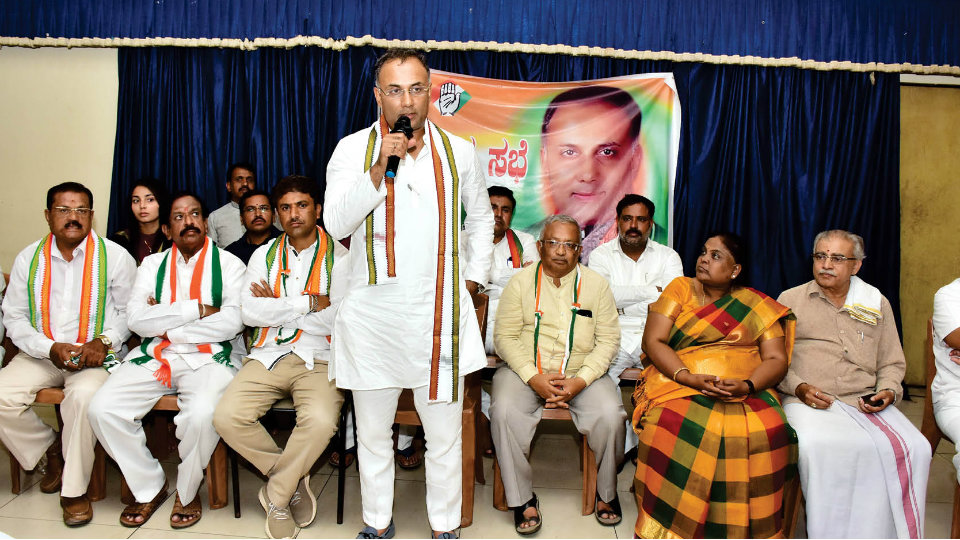 Mysuru: Though Mysuru-Kodgau LS constituency Congress-JD(S) coalition candidate C.H. Vijayashankar is not a Brahmin, he is a Brahmin because of his qualities. Everyone should support an ingenious personality like him in this election, said Karnataka Pradesh Congress Committee (KPCC) President Dinesh Gundu Rao.

He was addressing the meeting of Brahmins at a private hotel in Chamundipuram here yesterday and said that there is a feeling that if one is a Brahmin one would vote only for BJP. But to say that Brahmins are confined to BJP is not true as they look at the candidate in the fray and vote accordingly. Hence, in this election our community will play a decisive role and vote for a simple, sincere, honest candidate like Vijayashankar who has the interest of the society at heart, he said.

“However, there is nothing to talk about the personality of the opposition BJP candidate. He does not behave like an MP should behave. He has not worked towards bringing all the communities together. Hence, Vijayashankar is bound to win this time,” he said expressing confidence.

Brahmins are reflected as BJP’s vote banks. However, in the Congress the Speaker, Revenue Minister, KPCC President are all from Brahmin community. What more a party needs to do, he asked.

“A country cannot be built by polarising the minds of the people and society. When top leaders ask people who do not vote for BJP to go to Pakistan, then it is nothing but giving a call to divide the society. This should never be done. The people of all communities must be brought together. And our society has this strength,” said Gundu Rao.