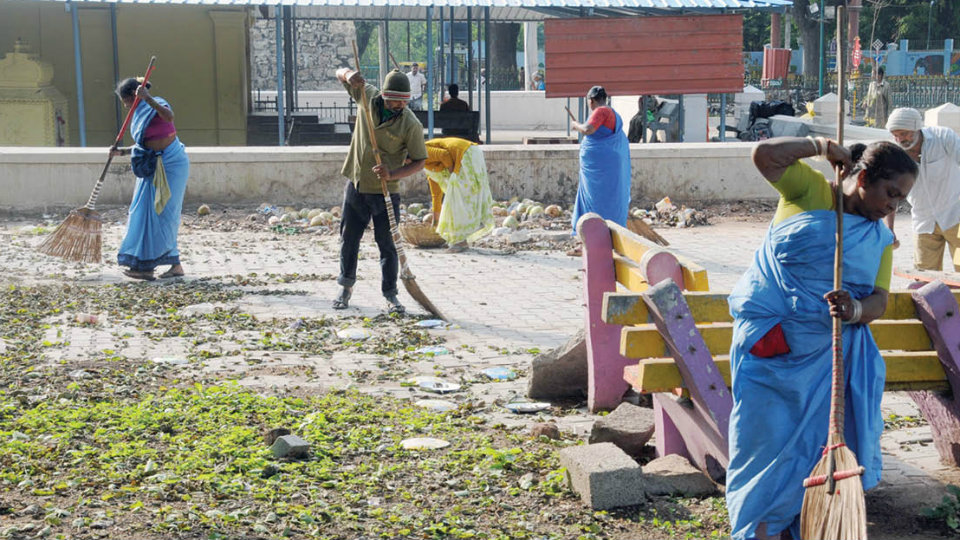 Mysuru Taluk Panchayat Executive Officer Krishnakumar told ‘Star of Mysore’ that the cleanliness campaign will be launched under the caption ‘Garbage-free Village’ in 20 of the 37 GPs of the Taluk.

Pointing out that the campaign will be taken up under ‘Swachh Bharat Mission,’ he said that the initiative is being taken up at a cost of Rs.5.5 crore, out of which Rs.4.5 crore has been released.

Explaining the details of the plan, Krishnakumar said the initiative involves setting up of a waste disposal plant, appointment of Pourakarmikas, distribution of waste dumping bins to every household and digging of sanitation pits, among other works.

Noting that the necessary land for construction of waste disposal plants has already been identified in several GPs including Yelwal, Bogadi, Devalapura, Varuna, Jayapura, Gunghral Chhatra, Dhanagalli, Chamundi Hill, Doora, Harohalli, Kadakola, Marballi and Koorgalli, he said that the Government has released Rs.10 lakh out of the Rs.20 lakh grant for each of these GPs for constructing the plant.

Highlighting the means for mopping up resources, Krishnakumar said that the TP has planned to impose an annual tax of Rs.250 on every household in order to meet the expenses of the cleanliness campaign. But this is subject to the approval of people’s representatives and higher authorities, he said and added that the TP has proposed to purchase an Auto- Tipper for every GP and three sucking machines in total.

He attributed the launch of the campaign to the efforts of MP Pratap Simha, MLAs G.T. Devegowda and Dr.Yathindra Siddharamaiah, ZP CEO Prashanth Kumar Mishra and other top officials.

He further said that the TP has achieved cent percent success in revenue earnings by collecting over Rs.33 crore annual taxes (water, property taxes etc.) from all the 37 GPs as on March 31, 2020.

Meanwhile, Chamundeshwari MLA G.T. Devegowda said that several meetings have been held to discuss setting up and maintenance of waste disposal plants in all GPs coming under his Constituency. The first phase of ‘Garbage-free Village’ initiative will be launched soon, he added.