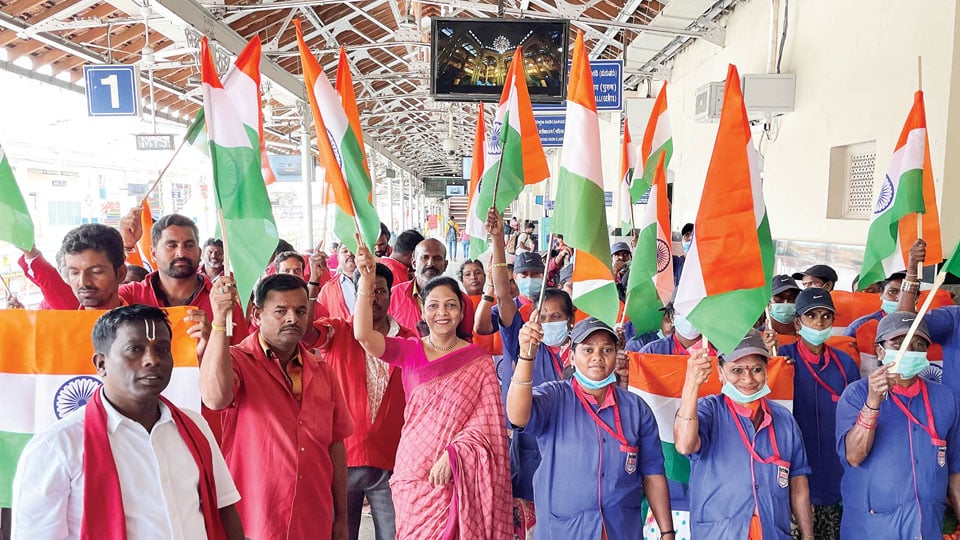 Mysore/Mysuru: As part of Har Ghar Tiranga campaign from Aug. 13 to 15, the staff of South Western Railway (SWR), Mysuru Division, hoisted the National Flag at their houses and in all 118 Railway Stations across the Division. Personnel Branch of Mysuru Division had distributed 6,500 Tricolour to all the employees working in the Division.

To create awareness among public to hoist the Flag at their houses, announcements are being made at Stations. Posters have been displayed at prominent places of various Railway Stations to make them aware about the campaign. Apart from the above, Selfie Stands on Azadi Ka Amrit Mahotsav and Har Ghar Tiranga theme have been installed at 10 major Railway Stations over Mysuru Division, namely, Mysuru, Hassan, Subramanya Road, Arsikere, Shivamogga Town, Davangere, Harihar, Chitradurga and at  Mysuru Divisional Office. Har Ghar Tiranga stickers have also been pasted on locomotives and coaches.

Har Ghar Tiranga campaign is launched by Government of India to encourage people to bring the Tiranga home and to hoist it to mark the 75 years of India’s Independence. The idea behind the initiative is to invoke the feeling of patriotism in the hearts of the people and promote awareness about our National Flag.

Apart from hoisting the flag at their houses, people can also pin a flag virtually at www.harghartiranga.com, along with posting a Selfie with flag on the site.

Speaking on the occasion,  Pooja Agarwal, President, SWRWWO, appealed the gathering to celebrate Azadi Ka Amrit Mahotsav by hoisting the flag at their residential buildings and make the event a grand success.