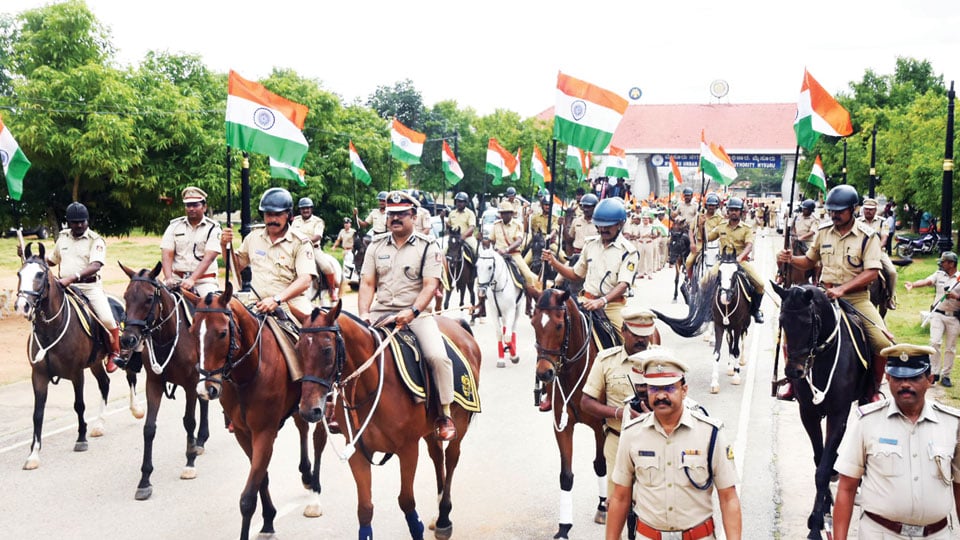 Mysore/Mysuru: “One person’s freedom must not curtail the freedom of another person and Police must ensure that everyone enjoys freedom to the fullest as guaranteed by the Constitution,” said City Police Commissioner Dr. Chandragupta. He was addressing hundreds of Policemen drawn from the City and District units who took out a ‘Sankalpa Yatra’ in the city this morning to spread the message of freedom and patriotism. The Police held a massive rally from Bannimantap Parade Grounds to Kote Anjaneyaswamy Temple at the North Gate of the Palace, marking the 75th year of independence.

Over 2,000 personnel drawn from various Police wings participated. When the rally began, the Commissioner rode ahead with a Mounted Police horse and later, he walked along with his Department staff. The rally passed through K.R. Circle to culminate at the Mysore Palace gate.

The ‘Sankalpa Yatra’ concluded at Balarama Gate (Kote Anjaneyaswamy Temple) where the Commissioner asked Policemen and allied forces to safeguard the freedom of everyone without partiality. “We wear khaki, a symbol of authority, to protect the rights of the people 24×7 and 365 days. We must help protect the elderly, women and children and all the citizens so that everyone remains free in the country and that is our resolve (Sankalpa),” he said.

Later speaking to reporters, Dr. Chandragupta said that all wings of the Police are geared up for the mega event. “The main event will be held at the Parade Grounds in Bannimantap and like in 2019, 23 units of the Police will participate and a host of cultural programmes have been planned,” he said.

“The I-Day rehearsals were held today and the Police machinery is alert. We have introduced checking of people at various places and sensitive areas are under constant monitoring. Dog squad, anti-sabotage squad and other units too are on high-alert mode to prevent any untoward incident,” he added.