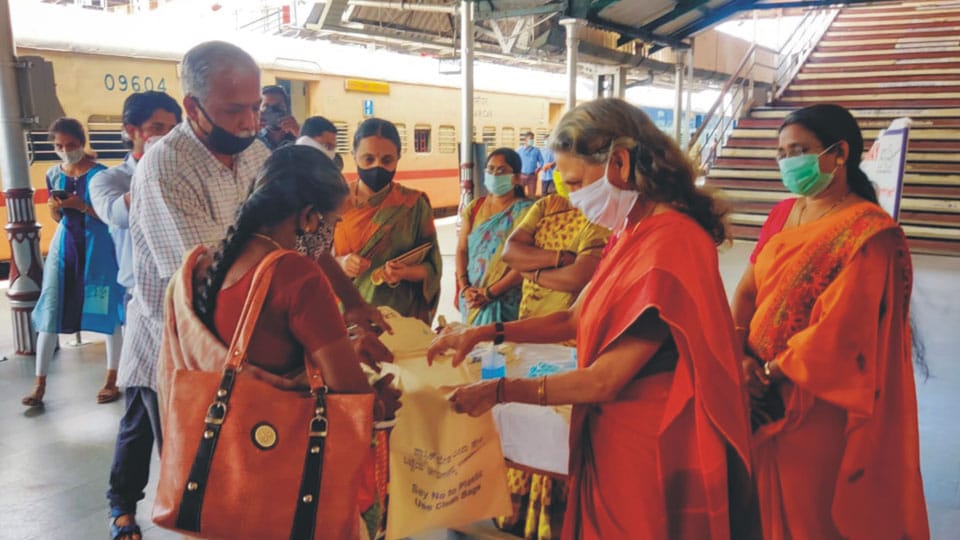 On arrival of  06539 Special Express from Bengaluru on Platform 1, members of South Western Railway Women Welfare Organisation (SWRWWO) along with Aparna Garg, Divisional Railway Manager and President, SWRWWO, Mysuru Unit, distributed cloth bags to passengers. The bags were contributed by the members of SWRWWO.  They counselled and urged public to shun the use of plastic bags and helped the passengers who were carrying plastic bags to transfer their goods to the cloth bag.

Two staff dressed in attractive Yakshagana costume and headgear also created awareness throughout the day about necessity of wearing mask in public places and need for maintaining social distance.

This event was organised to educate travelling public about the ill-effects of plastic garbage to nature and join Railways’ effort to reduce the same, specifically single use plastic.

Due to sustained efforts of the Railway staff and effective drives there is a substantial reduction in generation of plastic waste at  Railway Stations, the DRM said.

All Stations of Mysuru Division have already been provided with twin dustbins for segregation of waste at source and proper disposal of same is ensured.

Mysuru City Railway Station has four plastic bottle crushing machines and similar machines are provided at other ten major Stations over the Division.