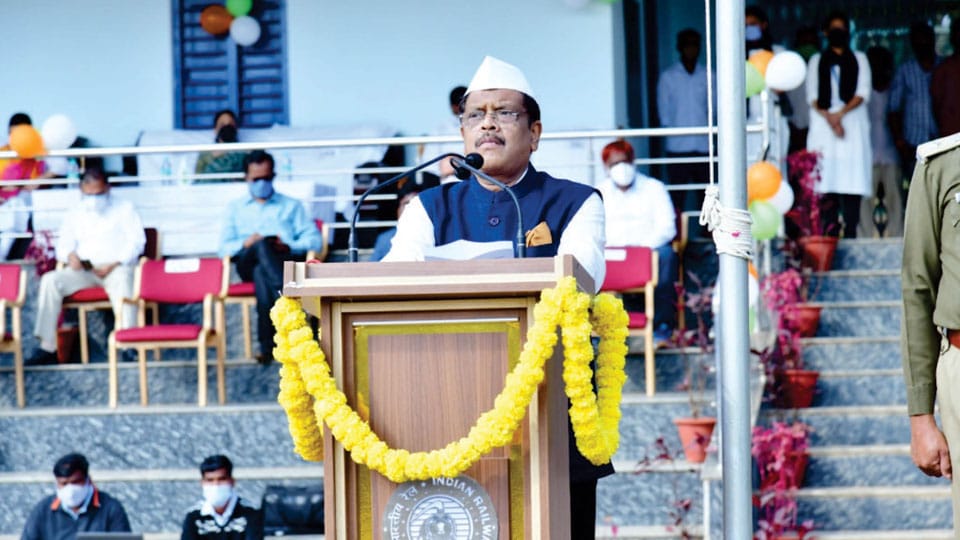 After unfurling the Tricolour, Rahul Agarwal, Divisional Railway Manager (DRM), SWR Mysuru Division, emphasised the fight against Covid and said that all 101 beds in the Railway Hospital, Mysuru, are now equipped with centralised Oxygen pipeline.

In October 2021, with a view to ensuring uninterrupted supply of oxygen to patients, a new PSA 500 litres per minute oxygen generator plant was commissioned at an approximate cost of Rs. 80 lakh. More than 98 percent of staff have been vaccinated with both the doses and informed that vaccination for children from 15 to 18 years of age as well as booster doses to eligible citizens has begun at the Railway Hospital.

The gross revenue till the end of December 2021 is Rs 860.73 crore which is 53.53 percent more in comparison to the corresponding period of last year. The freight revenue is Rs 665.49 crore, registering an increase of 49.83 percent as compared to last year’s figures. Mysuru division has also earned Rs. 19.1 crore under sundry earnings which is the highest ever for any year.

In the freight segment, the Mysuru Division has achieved the highest ever monthly loading in December 2021 transporting 0.918 million tons surpassing the previous best of 0.838 MT during July 2019, he informed.

On the passenger front, 90 percent of the train services have been restored across the division compared to the pre-Covid running of trains. Mysuru Division carried 10.69 million passengers up to December 2021. The punctuality performance of passenger-carrying trains has seen significant improvement with Mail/Express trains running with more than 99 percent punctuality, he said.

With the aim of improving the mobility of the freight trains for better wagon turnaround, concerted drives were initiated. This has led to maintaining the average speed of freight trains in the last few months at 49.1 kmph.

Agarwal said that the highest priority is accorded for operational safety and the Division is firmly committed to observing all safety norms/protocols at all levels with zero tolerance for accidents.  .

Four Level Crossings in the jurisdiction of the Division have been eliminated by constructing ROBs/RUBs and the work is in progress for achieving the target set for this year.  Three Permanent Speed Restrictions (PSRs) have also been removed.

He said that safety drives and awareness camps to staff and passengers were also organised.