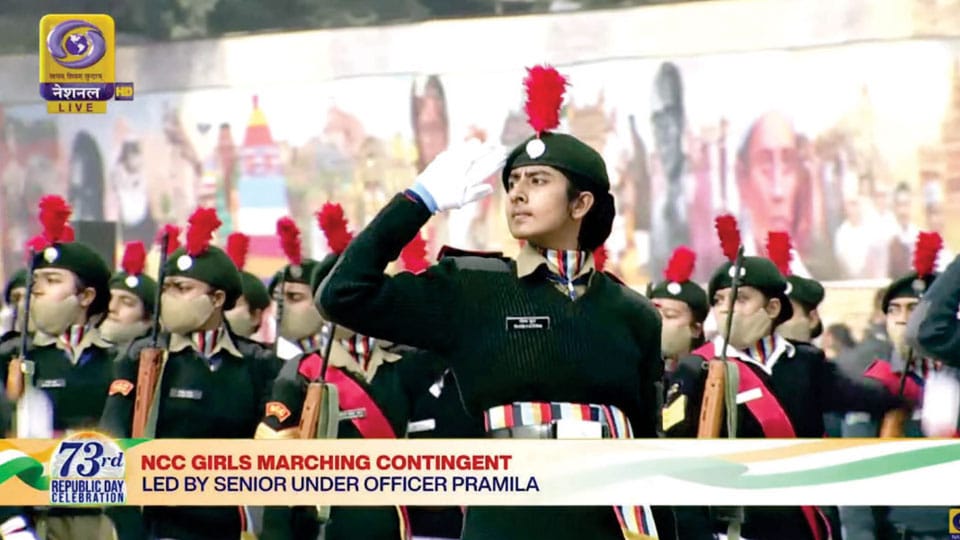 Mysore/Mysuru: It was a proud moment for Pramila Kunwar, a first year B.Sc. student at Maharani’s College of Science in Mysuru, who commanded the NCC’s marching contingent at the Republic Day (R-Day) Parade in New Delhi on Wednesday (Jan. 26). She was chosen among the cadets from all the 17 Directorates of NCC in the country.

Pramila is a Senior Under Officer (SUO) from 3 KAR Girls Battalion and made the cut to command the Senior Wing contingent of NCC. She is among the 54 NCC cadets selected from NCC Directorate of Karnataka and Goa for this year’s Republic Day Parade.

Participating in the R-Day Parade in New Delhi is a matter of pride for all NCC cadets and Pramila’s achievement is no mean feat as the entire nation was watching her march in front of President Ram Nath Kovind, Prime Minister Narendra Modi and hundreds of VVIPs.

Pramila Kunwar is the daughter of Pratap Singh Devki, who runs a tea stall on Kalidasa Road and home-maker Pushpa Kunwar. They are the residents of V.V. Mohalla. “She had put her heart and soul in NCC training since 2020 and has excelled in many NCC parades and events in Mysuru. But her prime focus was on achieving the pinnacle of NCC training, that is, Republic Day Camp in New Delhi,” a communiqué from NCC Mysuru Group stated.

Pramila’s family migrated to Mysuru in 2004 and she studied from Class I to X at Nirmala Convent before doing her PU at St Joseph’s College. She had enrolled herself with Bharath Scouts and Guides in 2015 and had led the contingent during the 2018 Dasara procession and gave the guard of honour to the then Governor Vajubhai R. Vala and then Chief Minister B.S. Yediyurappa at the Torchlight Parade in Bannimantap.

Pramila has also won certificates of merit in international mathematics competitions and English grammar competitions. She has a hobby of numismatics and has actively participated as a COVID-19 warrior at Mysuru District War Room. Apart from academics, she is an excellent artist with painting skills. She is a good dancer and a guitarist too.

Pramila trained hard at her battalion and her institution to get selected to represent Karnataka and Goa Directorate’s contingent at the Republic Day Camp this year. Her hard work and dedication resulted in her being selected to command the Senior Wing Contingent on Rajpath, which is a rare honour for any NCC cadet,” the statement said.

In fact, the Republic Day Parade had a total of five girl cadets of Mysuru Group. The others were Corporal L. Suchitra, Cadet S. Priya from 13 KAR Battalion, Senior Under Officer Roshini Marian and Cadet S. Chaithra from 14 KAR Battalion.

“The true spirit of NCC ‘Ankhon Mein Tej, Chehre Pe Muskaan’ was on display when the cadets smartly saluted the Tricolour and the Supreme Commander of the Armed Forces — President of India Ram Nath Kovind — while marching on Rajpath and passing in front of the dais on Republic Day,” according to the statement.

In all, 19 cadets from Mysuru represented NCC’s Karnataka and Goa Directorate at the Republic Day Camp this year. Apart from the cadets, Mysuru Group’s flag was kept flying high by Col. Manish Prasad, Officer Commanding, 14 KAR Battalion, who had been appointed as the Republic Day Camp Adjutant.