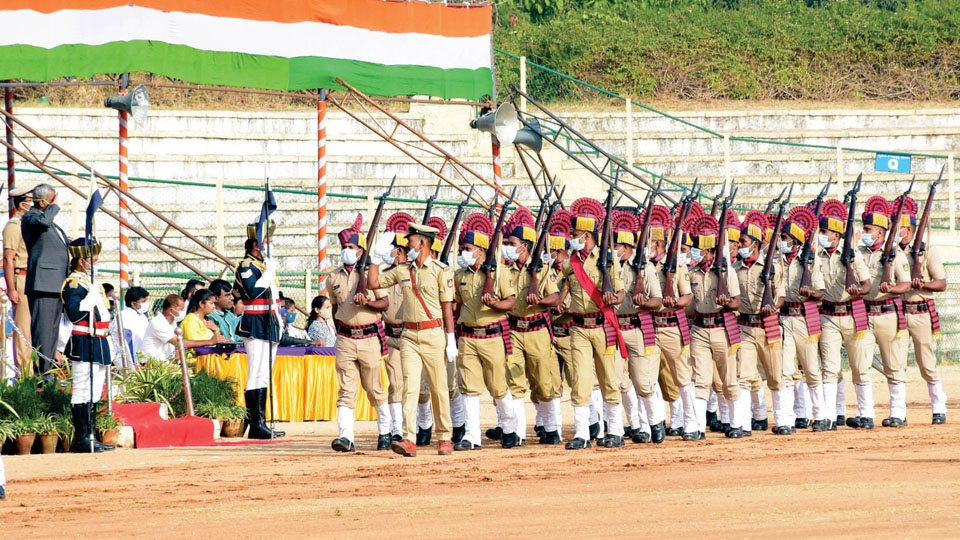 Mysore/Mysuru: District Minister S.T. Somashekar said here on Wednesday that development works is going on at a brisk pace despite the COVID pandemic.

He was speaking at the 73rd Republic Day celebrations, organised by the District Administration,  after unfurling the National Flag and reviewing the parade at the Bannimantap Torchlight Parade grounds here.

Maintaining that not withstanding the fight against the pandemic, the Government had not ignored development and the district was making brisk progress on various fronts, Somashekar said that the administration was fully prepared to handle any eventuality that may arise from the third wave.

Pointing out that COVID vaccination drive in Mysuru district has covered 88 percent of the total eligible population, he said that all efforts were being made to check the spread of the pandemic.

Asserting that the first dosage of vaccination has covered 100 percent of the population, while the second dose has been administered to 88 percent of the eligible population, he contended that there was no dearth of vaccine anywhere in the district. Booster doses were also being administered to frontline workers and all others eligible, he added.

Referring to payment of compensation for families of COVID dead, Somashekar said that the process of compensating the  family members of those who died of COVID-19 is under progress. A total of 1,665 families have received Rs.50,000 Union Government’s compensation and the State Government will distribute Rs.1 lakh to 819 families, he added.

Underlining the measures for drinking water supply, Somashekar said that under the Jal Jeevan Mission, 5.15 lakh families in rural areas will receive piped drinking water and 73,561 families have already been covered under the scheme. Under MGNREGA, 2,167 water bodies will be revived, he said while noting that the scheme also helps in job generation in rural areas. So far, 547 lakes and other water bodies have been revived under the scheme, he added.

Referring to Pourakarmika  housing, Somashekar said that 158 housing units were being constructed in the MCC limits for the benefit of permanent Pourakarmikas, for which Rs. 22.58 crore has been earmarked.

Stating that the Government has approved  Rs.377.60 crore for taking up infrastructure development works in MUDA layouts as a one-time measure, Somashekar said that Cabinet clearance is being awaited for High-rise Group Housing project of MUDA under which 1,960 housing units will be constructed at a cost of Rs.452 crore. Under Swachh Bharat Mission, 256 Gram Panchayats in the district will receive funds towards infrastructure development for solid waste management, Somashekar added.

Continuing, Somashekar said that three additional solid waste management plants have been approved within the MCC limits and civil works are going on for the plants at Kesare and Rayanakere. The project to clear legacy waste of over 3 lakh tonnes  at Vidyaranyapuram was in the process of finalisation, he added. The Minister further said that the MCC has received Rs.150 crore under Mahatma Gandhi Nagar Vikas Yojana.

Highlighting the significance of R-Day celebrations, he said there should be good relations between the States in order to maintain Unity and Integrity of the Nation. But a few groups are trying to divide the Nation for selfish purposes, he regretted.

Earlier, the Minister reviewed the Parade presented by a contingent of various Police Units that included CAR, DAR, KSRP, RPF, CISF, Civil, Women Police, Mounted Police, Home Guards, Traffic Police etc. This time, the parade command was given in Kannada  instead of English, as was the practice earlier.

Due to pandemic, the R-Day was barred for the general public and school children. Also, there were no cultural programmes.