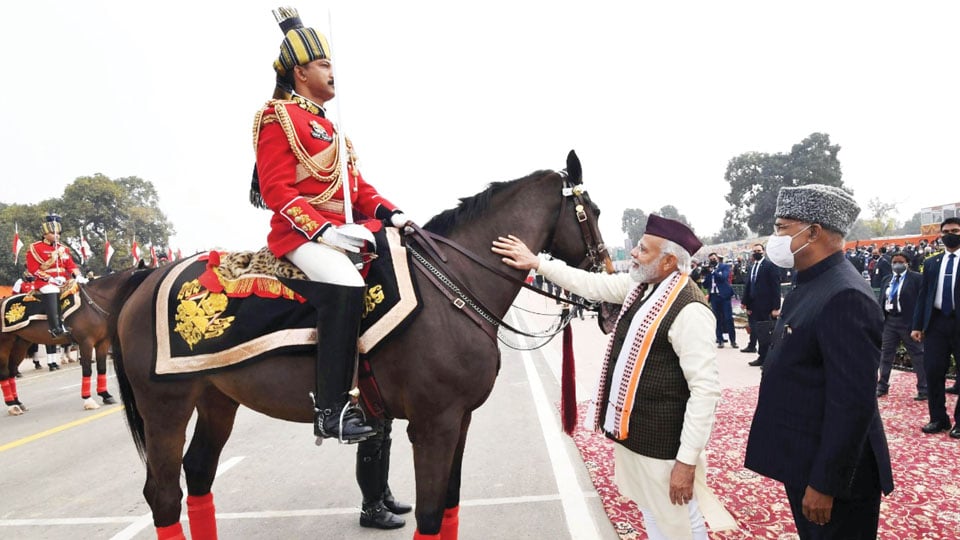 Virat was awarded the Chief of the Army Staff Commendation on the eve of Army Day on Jan. 15. Virat is the first horse to receive the commendation for exceptional service and abilities.

In all, Virat took part in the Republic Day parades 13 times.

Virat, a Hanoverian breed, was issued to the PBG on Sept. 12, 2000. He performed his duties as the Commandant’s Charger for over a decade and awed spectators, including foreign dignitaries, with his trademark poise and confidence.

From the beautiful arch of his neck right down to his graceful trot, to the wisdom in his eyes, Virat is a horse like no other. Virat has also been complimented by the President on a number of occasions for his stellar performance during mounted ceremonial events as well as equestrian events held on    Rashtrapati Bhavan Divas.

The President’s Bodyguard is the most elite regiment in the Indian Army, handpicked by height and heritage from a pool of thousands and bedecked in the finest regalia befitting their status.

The 200-strong cavalry unit has for centuries been assigned to India’s uppermost VIPs, from British Viceroys to modern-day heads of State.

Colonel Bommanda Dheeraj Chengappa had participated as the Commandant of the President’s Bodyguard (PBG) at the Republic Day Parades and Virat was the mount of PBG.

Colonel Bommanda Dheeraj Chengappa hails from Ammathi in Kodagu and is the son of Bommanda Chengappa, a BSF veteran.

Dheeraj was selected for the Army through the UPSC and lives in New Delhi with his wife and son. He graduated from Delhi University and then joined the Army.