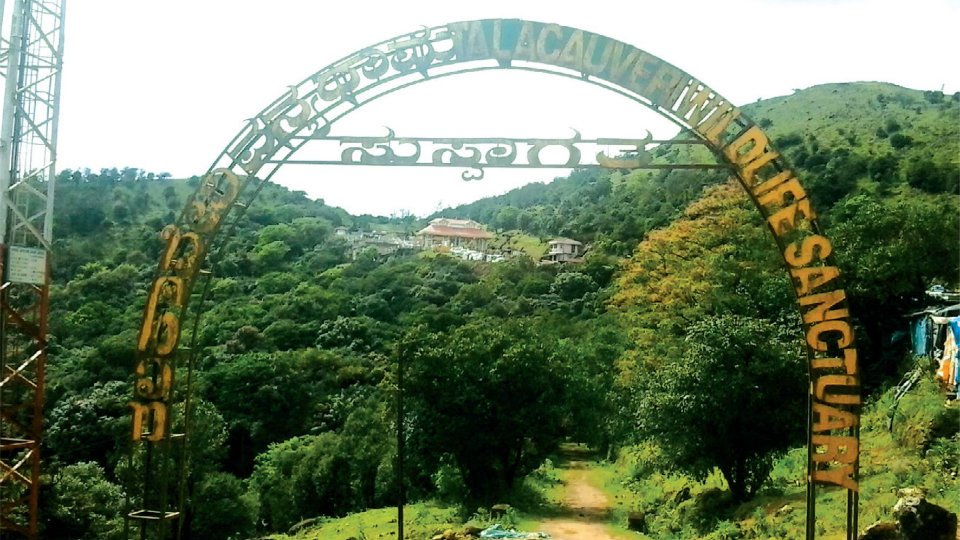 New Delhi: The Union Government has declared the Talacauvery Wild Life Sanctuary, spread across 213.07 sq km, as an Eco-Sensitive Zone. This declaration is also likely to hamper the Union Government Highway project from Bhagamandala to Kerala’s Panathoor.

The notification states that the Talacauvery Wildlife Sanctuary that forms the core of Western Ghats is characterised by rugged terrain with more than 85% of the sanctuary area having very steep slope of more than 35%, high rainfall ranging between 6,000 mm to 7,000 mm.

The sanctuary has been identified as one of the important bird areas in the Western Ghats as 13 of the 16 endemic birds of the Western Ghats are found here such as Malabar Banded Peacock, Paris Peacock, Malabar Raven, and Malabar Banded Swallowtail Malabar Pied Hornbill, Malabar Grey Hornbill, Malabar Trogon, Malabar Whistling Thrush, Wayanad Laughing Thrush, White-bellied Tree-pie, Orange and Black Fly Catcher, and Nilgiri Fly Catcher, and the sanctuary also harbours endemic and endangered Papilionid butterflies.

The sanctuary is surrounded by many reserve forests like Patti Ghat and Padinalknadu reserved forests, the sanctuary provides extended habitat for large mammalia like Asiatic Elephant and Tiger and forms part of the Mysore Elephant Reserve declared under the Project Elephant and the said sanctuary acts as an important corridor for large mammals to move between the Nagarahole National Park and Talacauvery Wildlife Sanctuary State of in Karnataka and Wayanad and Aralam Wildlife Sanctuaries in Kerala State, the notification said.

As per the notification, the region around the sanctuary from 1-16 km has been declared as the Eco-Sensitive Zone. No commercial activity such as mining can be conducted and no new industries can be set up here.

It also prohibits extension of industries that cause pollution, major hydel power plants, saw mills as well as rearing of animals, discharge of untreated effluents in natural water bodies or land area, establishment of large-scale commercial livestock and poultry farms by firms, corporate, companies, setting up of small scale industries not causing pollution, collection of forest produce or non-timber forest produce, erection of electrical and communication towers and laying of cables and other infrastructures and other commercial activities.

Talacauvery Wild Life Sanctuary
Govt. mulling on granting reservation for poor families from upper castes
From Here and There… Of Kodagu and the Kodava