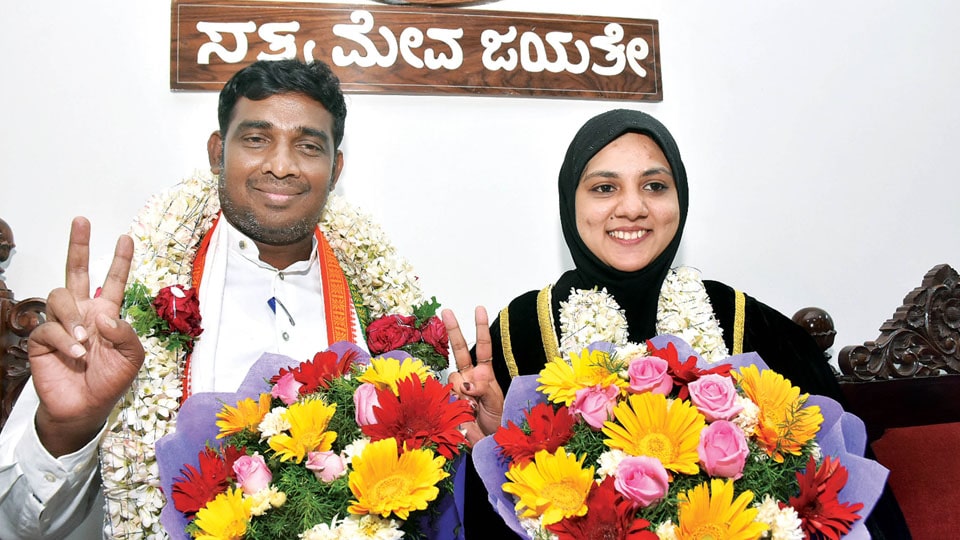 Tasneem of JD(S) is Mayor

Mysuru/Mysore: The city got its youngest Mayor when 31-year-old Tasneem of JD(S) was elected as the city’s First Citizen (Mayor) in the Mayoral election held at the MCC’s Council Hall this morning. Tasneem is the thirty-third elected Mayor.

Tasneem represents Ward 22 (Meena Bazar) in the 65-member civic body. With her election, Tasneem also earns the distinction of becoming the first-ever Muslim woman Mayor of Mysuru. The Mayor’s post for the second term of the current tenure of the MCC was reserved for BCA (Backward Class)  woman candidate.

C. Sridhar of Congress was elected as Deputy Mayor as that post was reserved for SC candidate. He represents Ward 38 (Giriyabovipalya). Both Tasneem and her deputy Sridhar bagged 47 votes, trouncing their respective BJP rivals Geethashree   Yoganand and Shanthamma Vadivelu, who could manage only 23 votes each.

The election process began with the filing of nomination papers at 7.30 am when Tasneem of the JD(S) and Geethashree Yoganand of the BJP filed their nominations. After the deadline ended at 9.30 am, the candidates were given five minutes for withdrawal of nominations. But as no nomination papers were withdrawn, the poll was held in which Tasneem bagged 47 votes out of 70, while her BJP rival managed just 23 votes.

The MCC has 73 voters, including 64 Corporators, four MLCs, four MLAs and the MP representing Mysuru. With the disqualification of Ward 18 BJP Corporator Guru Vinayak over fake caste certificate, the strength of the 65-member civic body has come down to 64. The by-poll to Ward 18 will take place on Feb. 9.

The process for electing the Deputy Mayor was similar to that of the Mayor’s election and C. Sridhar of the Congress was declared elected, defeating his rival Shanthamma Vadivelu of the BJP who secured just 23 votes which included that of 21 party Corporators, Chamaraja MLA L. Nagendra and M.V. Ramprasad, an independent Corporator. The BJP has 21 Corporators while the Congress has 19, JD(S) has 18, BSP 1 and there are 5 independents.

The newly-elected Mayor Tasneem is a two-time Corporator. She is a BA graduate from the city’s Maharani’s College and is married to Syed Samiulla, a businessman. The couple has a son and a daughter.

Deputy Mayor C. Sridhar is a resident of Kailaspuram. He is a BA graduate. His wife Anju is a home-maker and the couple has a son. Sridhar had defeated former Mayor Purushotham in the 2018 MCC polls.