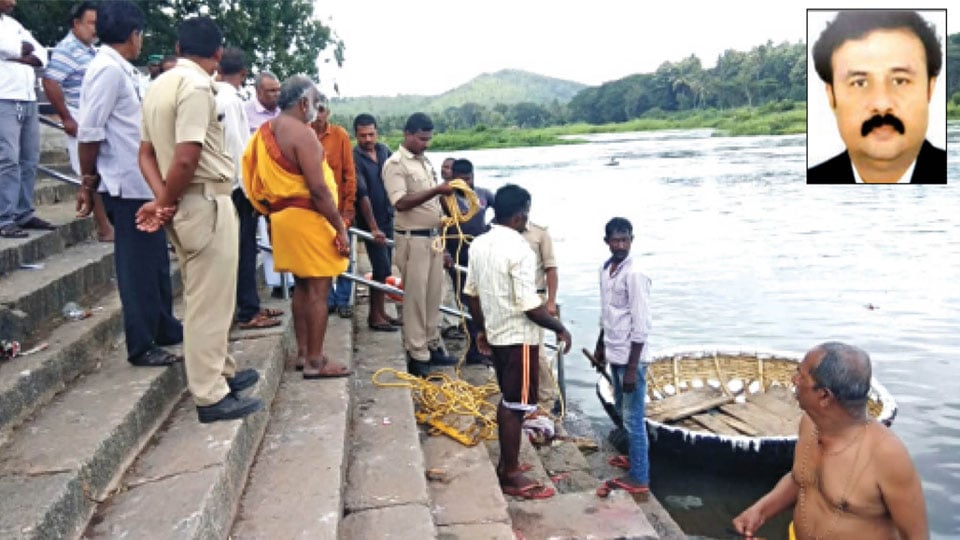 Another woman, who came to end her life, backs off seeing body being swept away

Srirangapatna: A 45-year-old man, who had come from Bengaluru to immerse the ashes of his mother at Sangama in Srirangapatna drowned as he slipped and fell into Cauvery River yesterday.

The deceased is Srikanth, an employee of an IT company and a resident of Rajajinagar in Bengaluru. Srikanth, along with five of his relatives had come to Sangama to immerse the ashes of his mother Ambuja. After completing the rituals, Srikanth entered the river to immerse the ashes. As the water was turbulent, he lost balance and was washed away.

Though his relatives immediately screamed for help from local people, Srikanth was washed away due to water force. Srirangapatna Police summoned expert swimmers to trace the body which was found near the retaining wall close to Mahadevapura, about 11 kms from the spot.

Meanwhile, an elderly woman from Ramanagaram, who had come to Ganjam in Srirangapatna allegedly to commit suicide, backed off from her plans after seeing the body of Srikanth being washed away.

Srirangapatna Police, who were searching for the body of Srikanth, found the elderly woman sitting on the banks of the river and questioned her on suspicion. She told the Police that she had come there to commit suicide. The Police seized the gold jewellery weighing about 250 grams which was in her possession and took her to the Police Station and after checking her background, returned her jewellery and sent her back to her place.

A body of a girl in uniform was found in Hemavathi River near Mandagere village close to Kikkeri yesterday evening.

The girl has been identified as Ranjitha (16), daughter of Nagaraju and a first year PUC student at Holenarasipur Government College.

She was residing with her father Nagaraju, mother Javaramma and sisters Manasa and Cauvery at a rented house in Vaddaragudi Village, Akki Hebbal hobli in K.R. Pet taluk.

Kikkeri Police, who rushed to the spot, fished out the body, registered a case and shifted it to Adichunchanagiri Hospital at Bellur Cross.