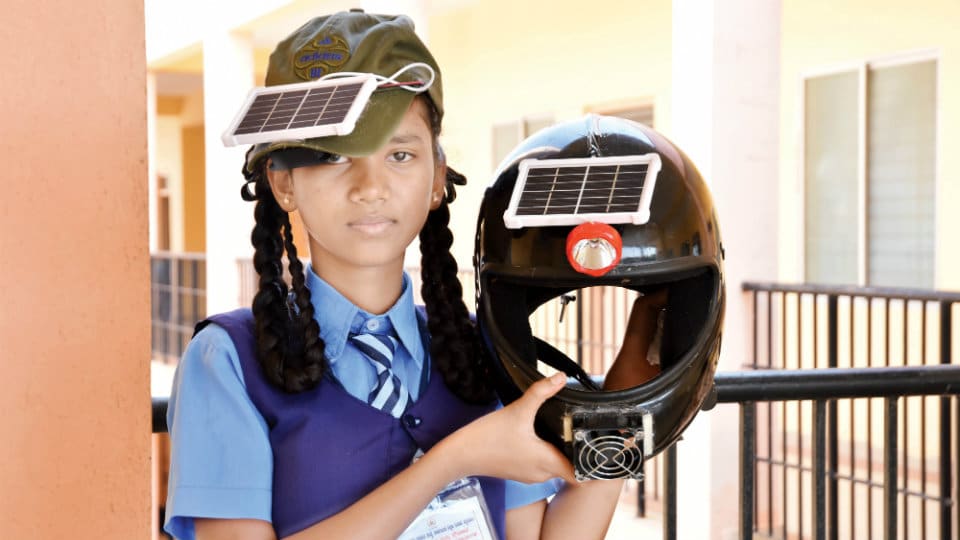 Science is really cool and there are so many amazing things in this world. There are umpteen science experiments for children that just make us stop and say, ‘whoa’ or ‘wow’. Children are naturally curious and doing simple science experiments at home or in classroom is the easiest way to teach children to be problem-solvers and critical thinkers and help them develop a curiosity about the world around them. These skills empower them to be confident in their ability to handle life’s challenges which is a life-skill that cannot be overrated.

This Weekend Star Supplement features the two-day INSPIRE Awards-MANAK competition that was held in Mysuru recently where over 300 children from Mysuru and Chamarajanagar — future Technopreneurs — presented their awe-inspiring science models.

Harbingers of change: Simple science models that will amaze you

History has shown that resolving social problems through a scientific approach is the best way to handle them. A lot of mistakes and logical fallacies can be avoided from being repeated by thinking scientifically.

Scientific temper encompasses rationality, rights, and responsibility in equal measure. Science need not be restricted to school curriculum. It needs to be talked about outside schools, academic institutions and should be made a part of public conversation. The best time to educate students in scientific approach and critical thinking is by making sure that the curriculum is created keeping this vision in mind.

Scientific temper has been defined by several educationists, philosophers and scientists. Indian Constitution upholds the cultivation of scientific temper as one of the fundamental duties of citizens. Children are naturally curious, asking questions, and wondering how things work is a natural question that comes to everyone. This approach towards life should be nurtured, nourished and encouraged throughout the education system.

While science gives us knowledge, tells us the logic, provides an experience, explains why things exist the way they do, scientific temper would guide us on the constructive use of the knowledge, abilities and experiences that science equips us with. There is both wisdom and morality involved in the usage of knowledge.

The Department of Science and Technology, Union Government, has revamped a popular outreach programme conceived to hook children early on to science and research and tweaking it to reflect a thrust on technology and exposing children to the innovation cycle. The earlier INSPIRE Awards (Innovation in Science Pursuit for Inspired Research) has been rechristened MANAK (Million Minds Augmenting National Aspirations and Knowledge).

Initiated in 2010, in its newest form, INSPIRE Awards-MANAK scheme is designed as a complete incubation programme where top ideas and innovations from the national level competition is taken up for enterprise creation. Suitable entrepreneurs are scouted to take these innovations forward, entities incorporated and business operating models are defined and executed.

Sixty school students from different parts of the country are conferred awards under the INSPIRE Awards – MANAK programme every year. Aligned with the action plan for the “Start-up India” initiative, the scheme aims to help build a critical human resource pool to strengthen and expand science and technology system and increase the research and development base of the country by encouraging students in class sixth to class tenth from all government and private schools throughout the country to come out with innovations and ideas for solving the various societal problems.

In 2019, a total of 2.88 lakh ideas and innovations were scouted in collaboration with States and Union Territories. Out of these, over 50,000 were shortlisted and provided with a financial support of Rs. 10,000 each for developing prototypes. After a series of district and state-level exhibitions and competitions, over 800 of them were selected to participate at the national-level exhibition and contest.

READ ALSO  And they play a fiesta with Vibrant Blooms yet again...

As part of the programme, a district-level exhibition was organised at Adarsha Vidyalaya near Jackie Quarters in Mysuru city recently where school children from Mysuru and Chamarajanagar displayed their scientific innovation and several indigenous and low-cost science modules to solve day-to-day problems. While 233 students participated from Mysuru, 93 came from the rural belt of Chamarajanagar.

This year, 44,006 students have applied for INSPIRE Awards – MANAK and of them 42,143 students have been selected and in Karnataka, 7,861 young scientists have made it to the list. After qualifying in district-level, the students will take part in State-level competitions from where they will go to national level where 60 students will be selected after stringent tests and elimination rounds.

Among the exhibits presented by the students that drew eyeballs are model of electric generation after burning waste, improvised drone, a military-alert drone that can spot enemy invasion, self-driven car to foil bomb attacks and terrorist strike, system to clear traffic to ambulance on a busy road, solar hat, helmet and drawing water without the help of motor. This apart, there were many models that stole the show in the two-day exhibition.

Wealth out of waste: Managing waste And generating power

Waste management is a gargantuan problem. This model prepared by D.M. Sujan, a Class 10 Student of Sri Adichunchanagiri High School, H.D. Kote demonstrates an efficient waste management plant that can generate electricity. Garbage is dumped and burnt in a large container and the vapour is passed through a tube and let into a turbine that rotates using the heat generated inside the incinerator. Once the turbine starts rotating at great speed, power is generated.

The power can be used for streetlights and a little improvisation can lead to a waste management revolution in a city like Mysuru where over 500 tonnes of garbage is generated every day.

Innovation at its best: Keeping cool inside a full-face helmet

Two-wheeler riders often complain that their face and head burns when they travel long distance on their bikes wearing a full-faced helmet. And many of them say because of the heat generated by the helmet they have lost their hair. Not anymore, thanks to a special helmet designed by C. Bhoomika (her photo featured on Page 9) , a seventh standard student from Government Higher Primary School at Tagarupura, Chamarajanagar District.

This unique helmet has a fan that pumps fresh air into the insides of the helmet and utilises solar power that heats the solar chips. Air is pumped inside and it permeates the entire interiors keeping the head cool. One does not sweat after wearing this helmet and the instrument is light weight. The air fan switches on as soon as one wears the helmet. The helmet even has a solar-powered light that the wearer can switch on during nights.

Not only this, coming from hinterland, Bhoomika has designed a ‘cooler’ P Cap that can be worn by workers in fields and estates. This hat too has a fan and keeps the head cool under the hot sun. Solar power is used to rotate the fan that in turn pumps air into the cap. This innovation is done using low-cost material and is eco-friendly.

Children are often burdened with books and they are forced to carry heavy bags on their backs. Nowadays parents are more worried about the fate of their children’s backs rather than worrying about their career as when the children grow up, the backs are usually bent.

To eliminate this problem, C. Keerthana, an eighth Standard student of Government Higher Primary School at Tagarupura, Chamarajanagar has designed a trolley for school bags. The trolley has been attached to the bag and has wheels. Children can just hold the trolley and drag it on their way to school. Ask Keerthana and she will say that the bag has been designed for special children who have difficulty to carry the weighty bag.

Pumping water is a child’s play

We spend thousands of rupees to pump water from one place to another. Apart from mechanical failure, these pumps fail many a time in their job that draws heavy electricity too. Here is a model of Hydraulic Ram Pump where water is pumped through sheer force using a hydraulic method. The model has been designed by Kunthu Sagar Jain, a ninth standard student of Government High School Thumbasoge in H.D. Kote.

This pump that works on air pressure, once improvised, can pump gallons of water from rivers and ponds. Notably, our farmers spend lakhs of rupees every year to draw water from rivers to their fields using diesel pump sets. However, the pump does not work in wells.

Low-cost urinal to ease burden of many Government Schools

Thanks to the apathy of our elected representatives and the education department’s lack of will, many government schools do not have toilets for boys and they are told to use the open field or bushes to relieve themselves when the nature calls. Pradeep Kumar, a 10th Standard student from Government High School, Mullur in Kollegal of Chamarajanagar has innovated a low-cost urinal using a discarded water can. It is easy to assemble and uses cheap materials to avoid the use of costly ceramic ware. It is easy to maintain and functions as any other men’s urinal that uses water.

Defending a nation’s borders is a costly affair. Apart from crores of rupees spent on fencing and maintaining the borders, a country has to invest on human resources to defend territories – Air, Land and Sea.  Many a time lives are lost defending borders especially in the case of India where the country has mischievous neighbours.

Unprovoked attacks from across the borders kill hundreds of soldiers. To eliminate the problem, faceless and efficient defence robots can be used to defend the borders, like this robot that has been invented and developed by Musharruf Ahmed, a 10th Standard Student from CFTRI School, Mysuru.

The robot has been designed using eco-friendly materials. It keeps an eye on enemy movements at the border and detects if there is an intrusion. Signals are passed on immediately to the control centre that directs the robot to open fire.  Musharruf Ahmed has also designed a drone that can keep an eye on the border from the sky.

A ninth standard student from Government High School, Mullur in Chamarajanagar. L. Mamatha has invented a floor cleaning machine that has a roller in the front and a waste or dust collection point at the back. It is powered by battery. When the machine is switched on, the roller with a soft brush rotates and in the process collects dust and mud residues and pumps them into a cut plastic bottle that has been fixed behind the machine. Once the plastic bottle fills with waste, the bottle can be emptied for reuse.