Home » Columns » Abracadabra By K. B. Ganapathy » With love from Donald Trump to India and Narendra Modi ! 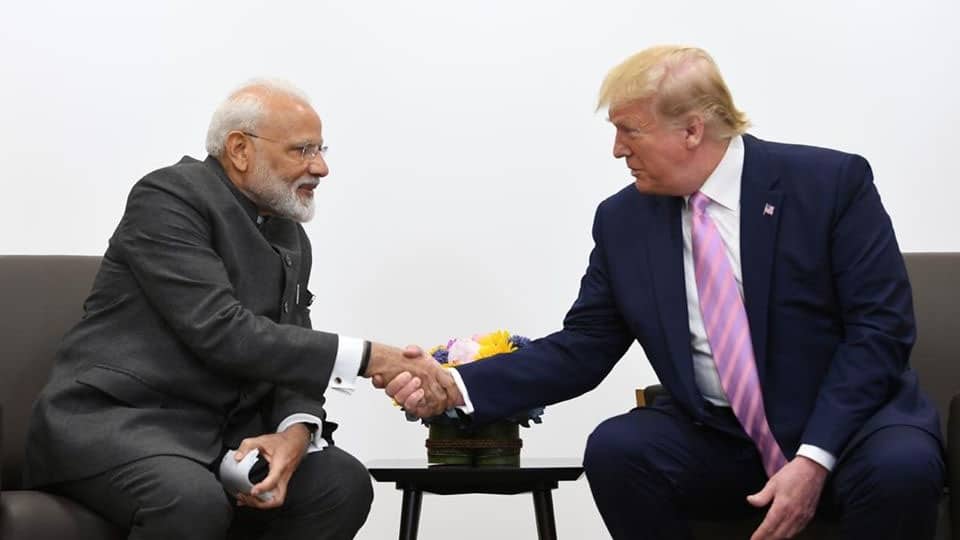 With love from Donald Trump to India and Narendra Modi !

Other day, I was riveted to America’s CNN TV Channel watching President Donald Trump delivering his 2020 State of the Union Address, an American tradition, till the end. It was Tuesday, 4th of February. I found it rather surprising and also an act of bravado on the part of the President to deliver the address just a day ahead of the final decisive stage of his impeachment by the Senate.

Be that as it may, the Senate has acquitted Trump ending this historic trial on 5th February 2020. Hallelujah. As per Trump, all is well that ends well. He is now well geared to take on his Democratic rivals in the coming Presidential elections. So, probably for another four years, it is all going to be hunky-dory for Trump in office. Now let me revert to President Trump’s State of the Union Address because I share some of the aspirations he has expressed for his country believing in the ideology “America First.” Simultaneously, I also share some of the wrong decisions and administrative steps which, according to Trump, were taken by his predecessor and adversely affected the interest of America. I find, in India, today Prime Minister Narendra Modi is also placed in a similar situation because of the wrong decisions and policy paralysis that plagued our country under the UPA dispensation for 10 long years.

Trump’s opening words were rather bombastic but also true to a great extent. Let me quote: “Three years ago, we launched the great American comeback. Tonight, I stand before you to share the incredible results. Jobs are booming, incomes are soaring, poverty is plummeting, crime is falling, confidence is surging, and our country is thriving and highly respected again! America’s enemies are on the run, America’s fortunes are on the rise, and America’s future is blazing bright.”

Comparing America to India is certainly odious. But there is nothing wrong in learning lessons, as Trump claims, about “American comeback”. Our Prime Minister Modi may also claim that he had launched “The great Indian comeback” six years back in 2014. Certainly, Modi cannot claim to have achieved incredible results as  Trump has claimed. However, I can only say that, under Modi, India’s fortunes are on the rise and India’s future is, to use Trump’s words, “blazing bright.” Under many decades of Congress rule, many problems were left to themselves, without striving to solve them, like during 800 years of Muslim rule, though under British rule of 150 years some developments were seen. I shudder to think, being a child of pre-independence, what would have been the fate of this country if BJP had not come to power under the leadership of a person like Narendra Modi.

My understanding of the Indian politics under the present Constitution is that it is NOT so much the political party which rules the country that matters as it is the leader, the Prime Minister. To give one example, Atal Bihari Vajpayee too was from BJP, but he was only the other face of Congress. Let it be.

Continuing, Trump said: “In just 3 short years, we have shattered the mentality of American decline, and we have rejected the downsizing of America’s destiny. We are moving forward at a pace that was unimaginable just a short time ago, and we are never going back!”

I am sure Narendra Modi as Prime Minister has rejected downsizing of India’s destiny by the so-called Left liberals, pseudo-secularists, of course the Congress party and the Tukde-Tukde gang emanating from JNU.

Not surprisingly, India is now not only respected in the world, it is also stronger than before 2014. There is much optimism among the majority of Indians across region, religion and caste.

Jobs and investments may not be pouring in the way Narendra Modi had expected or the people had anticipated. However, opportunity zones are being created for jobs and investment in every part of the country, providing additional budget allocation and infrastructure, is seen.

According to Trump’s speech, if America is restoring America’s leadership throughout the world, like the Policeman of the world, Modi is trying to restore India’s love and service throughout the world in the spirit of our Vedic injunction “Vasudhaiva Kutumbakam.” At one point, Trump said, “Socialism destroys nation, but always remember, freedom unifies the souls.” I think this cannot be more true than in the case of our country.

Since Nehru’s days, India has been following an economic policy known as “Socialistic pattern of society”, where a large part of the means of wealth-production, specially industry and commerce, was owned by the State, the Government. Naturally, all these industries, known as Public Sector Units (PSU) instead of making profit and producing wealth for the nation, were making losses. The employees were assured of their jobs and salary at the cost of the other hard-working tax-payers of the country. I am surprised that these employees of public sector industries did not feel patriotic enough in a country like ours, that had just got freedom, to build the country economically, ensuring its development and political freedom. May be, India lacked visionary leaders like former Prime Minister P.V. Narasimha Rao or the present Prime Minister Narendra Modi.

I liked Trump’s speech for another reason too. He remembered the Pilgrim Fathers, the real founders of America and the soldiers. One of America’s greatest Presidents Abraham Lincoln, greatest social reformer Rev. Dr. Martin Luther King Jr., and many others who assured removal of barriers, in all fields of human activity, on America’s children’s future. I guess PM Narendra Modi too is striving today to remove all kinds of barriers that exist between our children and their future.

At one point, Trump says, “The people are the heart of our country, their dreams are the soul of our country and their love is what powers and sustains our country. We must always remember that our job is to put America first!”

Well, should not our leaders also think the same? Put India First?

Trump also emphasised on issues that matter much to individual Americans and said that he would always protect Medicare and social security. Our Prime Minister Modi has already initiated action on these fronts. He spoke about the high cost of medical treatment and the fat bills from the doctors and hospitals suggesting healthcare reforms.

Trump made a reference to the illegal immigrants to America, specially from Mexico and spoke of building a “long, tall and very powerful wall” apart from patrolling by the security. We have a lesson here to learn. I imagine CAA is our wall !

Trump says these criminals should be handed over to the Immigration and Customs Enforcements (ICE) to be removed from the country. He also gave examples of cases where these illegal immigrants have committed brutal rape and murder after they were arrested but set free under the sanctuary policies. Thank God, we don’t have such Sanctuary Cities nor policies.

He spoke about the sacrifice American citizens have made fighting in other parts of the world and about combating radical Islamic terrorism. He said, “Our message to terrorists is clear: You will never escape American justice. If you attack our citizens you forfeit your life!” Let us hope our PM too will have a similar message to the terrorists attacking our citizens.

I guess, same can be said of India. In fact, more than America, it is India’s adventure which has just begun under Narendra Modi.

5 COMMENTS ON THIS POST To “With love from Donald Trump to India and Narendra Modi !”