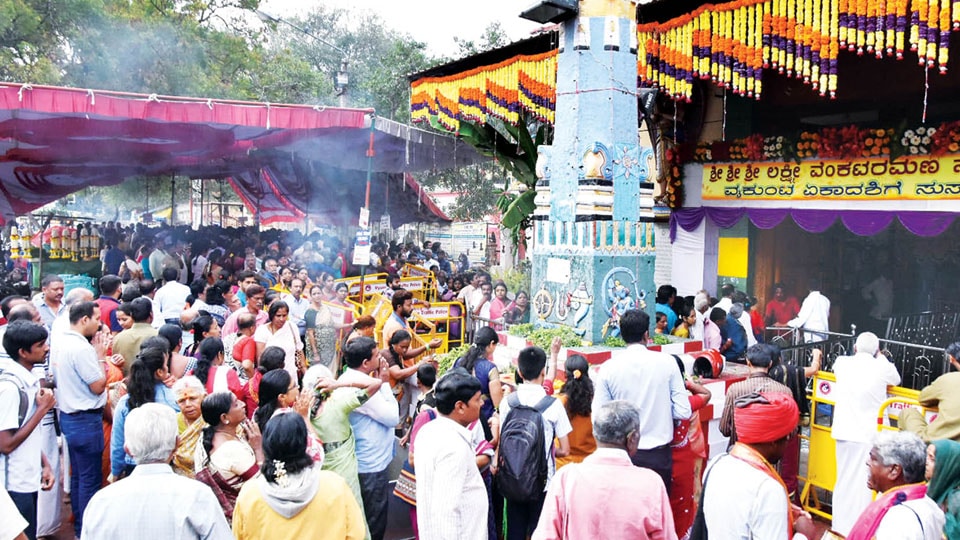 Mysuru/Mysore: Chants of ‘Govindaa,Govindaa…’ reverberated across the city as thousands of devotees thronged Srinivasa temples this morning for Vaikunta Ekadashi, dedicated to Lord Vishnu.

Devotees lined up at the temples since early morning, especially the ones dedicated to Lord Vishnu and Narayana, where ‘Vaikunta Dwara’ was specially erected.

The devotees chanting ‘Govindaa, Govindaa’ and Suprabhata prayers walked through the ‘Vaikunta Dwara’ to have divine darshan of their Lordships in the temple. Rituals and pujas began since early morning in the temples.

‘Vaikunta Dwara’ or the gate to the Lord’s inner Sanctum is opened on this auspicious day, which falls during the Dhanur / Margashira month in the Hindu calendar (corresponding to late December-early January in English calendar).

Fasting is an important aspect of Vaikunta Ekadashi with people fasting the whole day and keeping vigil. Also, many devotees consider that fasting on Ekadashi is holier than any other religious observation.

ISKCON Temple served the devotees with traditional and delicious non-grain Ekadashi Prasadam. The temples will be open till late night today to enable the devotees to have darshan of the Lord on this auspicious day.

Marking Vaikunta Ekadashi, ISKCON Temple at Jayanagar has organised ‘Sangeetotsava’ at the temple premises where noted singers will sing devotional songs and Bhajans till 10 pm.