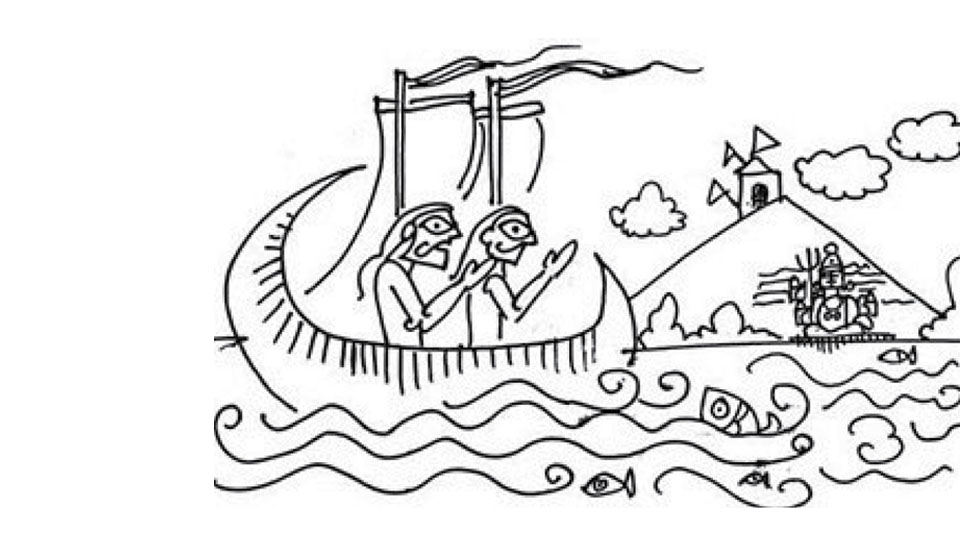 The Goddess of Sailors

For such a vast coastline, Indians do not have much of a sea mythology. Most images of boats in Indian art are related to ponds and rivers, and not the sea, such as images of Ram and Sita crossing the Ganga, or Krishna and Radha on the Yamuna. Images of sea-faring vessels are few and far between as in Bharhut Stupa, Ajanta Caves and Goa’s hero memorial stones.

Today we refer to Varuna as the Sea-God, the Father of Goddess Lakshmi, but in Vedic scriptures, his role is             with ‘waters’, a rather abstract term and not necessarily the sea, and he has a lot to do with royal upright conduct. It is only in the Ramayana that we encounter him as the God of the Sea who begs Ram not to shoot his lethal arrow at him and instead build a bridge to Lanka. In the Puranas, he is identified as Sagara, the sea, who rides a Makara (a dolphin or fish with an elephant head) and the rivers are his many daughters. And most importantly, in Vastushastra, he is the guardian of the West, facing Indra, God of Rain, the guardian of the East.

In Odisha, there are no specific Gods of the Sea. But women worship the Goddess Mangala who helped sailors return home. In Bengal and Bangladesh, sailors worship Pancha-pir, the five holy men from Mecca, who probably originated from the five Buddhas of Mahayana Buddhism. There is an 8th-century tale of a Bhairava-worshipping Tantrik travelling back from Java to India on a ‘stone’ ship using his magical powers.

In ancient Tamil Sangam literature, the wives of fishermen would pray to Varuna, in the form of a shark fin planted in the sand, worshipped with flowers, on new moon nights of high tide. We also hear of the virgin Goddess Kumari at the tip of India who stops the sea from swallowing the coastline. The Tamil Buddhist epic Manimekalai refers to a Sea-Goddess Manimekhala who rescues the heroine from the unwarranted attentions of a Prince and takes her across the sea to an island where she learns about Buddhism. In the Kanheri Caves on the Western coast, there is a 5th-century inscription where the Buddhist Goddess Tara is invoked for the protection of ships by a mariner.

Most interestingly, in Gujarat, near Khambat, we hear of Vahanvati Sikotar Mata also known as Harsiddhi Mata. She is associated with prosperity, fertility, and security of ships. In one story, she caused shipwrecks unless she was acknowledged and appeased. To stop her from looking at ships angrily all the time, she was brought down from the mountaintop overlooking the sea to the shore with a sacrifice of one buffalo for each step she took during her descent. Here she became the Goddess who helps sailors come home after successful business trips.

The name Sikotar draws attention to the Yemeni Island of Socotra (currently in the midst of a military crisis with the UAE claiming it). This island is mentioned in the Periplus of the Erythraean Sea, an ancient Greek navigation book, which describes sea trade between Africa, Arabia and India using the monsoon winds. The island name is most probably derived from the Sanskrit ‘sukhadhara’ or ‘providing bliss’. The island (Sikotar) was probably feared (it had a treacherous coastline) and embodied as a Goddess (Sikotar Mata) in Gujarat, even today worshipped with offerings of boats (vahana), by devotees not necessarily invested in maritime trade.

Decoding Mythology Dr. Devdutt Pattanaik
Woman in man’s world
Everyone has a choice