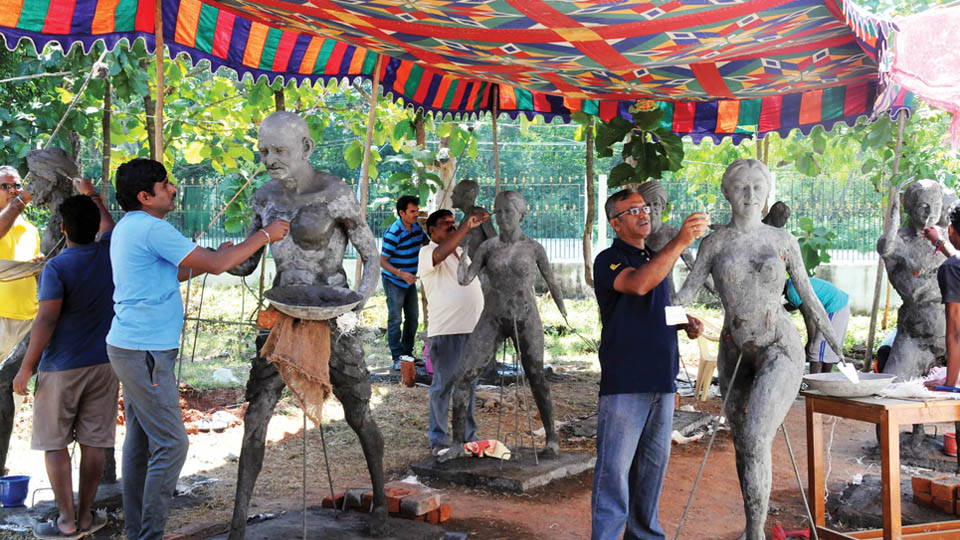 The Mahatma’s Sculptures taking shape at Gandhi Bhavan in Manasagangothri

The replica of the famous Sabarmati Ashram in Ahmedabad was recreated at Gandhi Bhavan in the picturesque Manasagangothri campus as part of the centenary celebrations of the University of Mysore in 2017.

Going forward and adding to the lustre will be nearly 25 sculptures of the Mahatma in various poses that are coming up in the sylvan surroundings of Gandhi Bhavan.

Realising how important it is to spread the message of Gandhiji, the Father of the Nation, the Gandhi Bhavan authorities came with the idea of the workshop by well-known and young sculptors to sculpt his figures. The aim is also to introduce his thoughts and actions to the future generation as Gandhiji will always remain relevant to the nation. The work on all 25 sculptures will be completed by Nov.5. 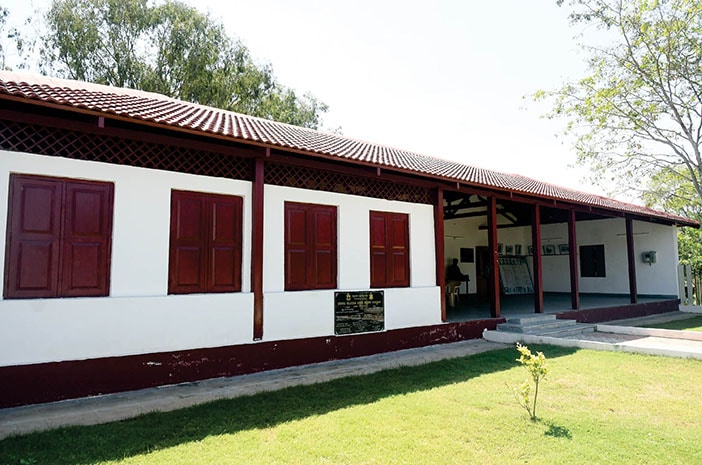 The idea of putting up Gandhiji’s sculptures took shape during the centenary celebrations when the then Gandhi Bhavan Director Dr. S. Shivarajappa and Executive Engineer H. Kishore Chandra visited the Sabarmati Ashram in Ahmedabad to study its plan and layout.

In this background, a workshop has been jointly organised by Kannada and Culture Department, Karnataka Shilpakala Academy,  Gandhi Bhavan and Rangayana. The 15-day workshop began on Oct.22.

In all, there are 35 sculptors including 19 senior sculptors and 16 junior ones who are participating in the workshop. The sculptors are involved in chiselling various forms of Gandhiji since the last one week and in the next three days they will be reaching the final stages of completion.

The 25 sculptures are being sculpted using different materials like cement, iron and bricks.  First the platforms for all statues are being built along with hooks on all four sides. This will help in shifting the sculptures easily.

Some of the designs include Gandhiji working on the Charaka, walking holding a walking stick, Gandhiji in a meditative pose, walking with a lamp and a child and the famous Dandi March. 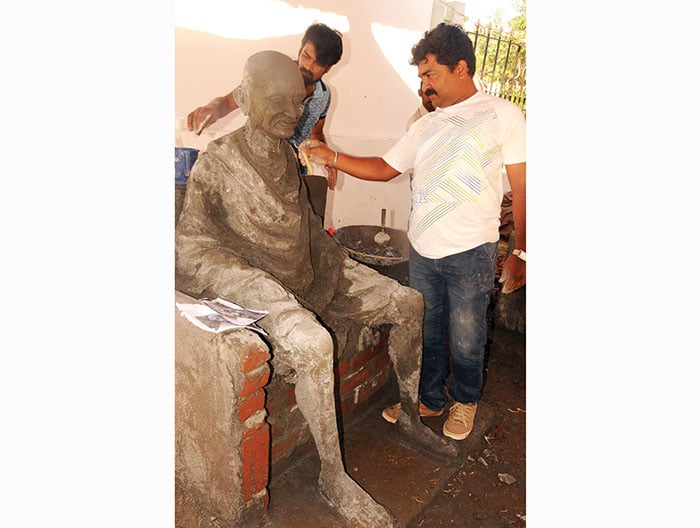 The other major attraction is Gandhiji sitting along with Nobel Laureate and National Poet Rabindranath Tagore. Mysuru sculptors Srinath R. Chitragar and Bhaskar are the ones who are sculpting both these figures.

They are using the famous photograph of the two giants of history of the 20th century sitting on two chairs separately during their first meeting at Shantiniketan on March 6, 1915. Tagore was the first to refer to Gandhiji as “Mahatma” or “Great Soul.”  In this model, it looks like Tagore is holding a book and reading, while Gandhiji is quietly observing him. This is the first time such a sculpture is being chiselled.

Sculpture Workshop Director K.K. Narayan Rao, who is a Rajyotsava awardee, speaking to Star of Mysore said, “This workshop is an ideal ground for unearthing the talents of the sculptors. The sculptors have arrived from different parts of the State. Everyone is involved in sculpting beautiful figures. The national-level sculptors are also participating. The senior and junior sculptors including the ones who have worked on Rock Garden in Haveri District are working since the past one week.” 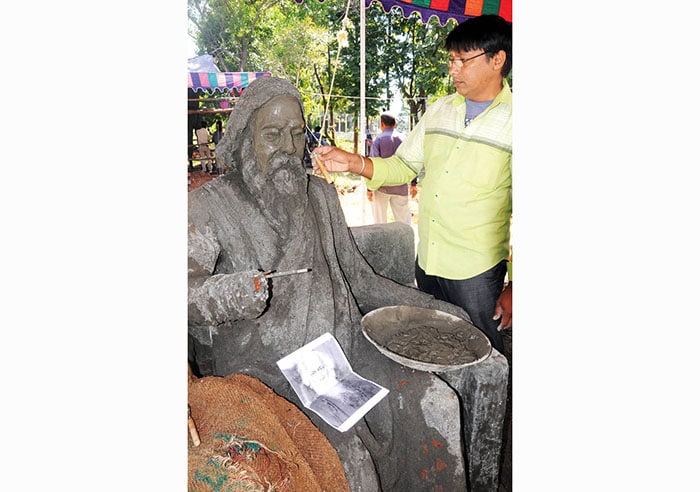 Gandhi Bhavan’s Dr. Umesh, speaking about the sculptures, said that keeping in mind the future generation and the present day youth, the sculptures are being made about the life and times of the Mahatma. Each will be about six to ten feet in height.

One of the most interesting sculptures apart from that of Gandhi and Tagore is the ‘Gyarah Murti’ statue of the Dandi March where Gandhiji is leading 10 common people. This iconic sculpture includes a woman with her head covered following close after Gandhiji, a cluster of three men including a turbaned Sikh visibly of high pedigree, a Hindu scholar with a topi and a Muslim peasant; a Hindu man wearing a turban as a mark of intellectual distinction, with a regular religious mark etched on his forehead; an  impoverished peasant looking far ahead, bearing no marks of class, caste or religion on his body; a Christian priest; another woman in a skirt and a young boy egging on a weary old man to travel farther.

On Nov.6, District in-charge and Higher Education Minister G.T. Devegowda will inaugurate the sculptures. They will be placed amidst trees to blend neatly into the environment, he said.