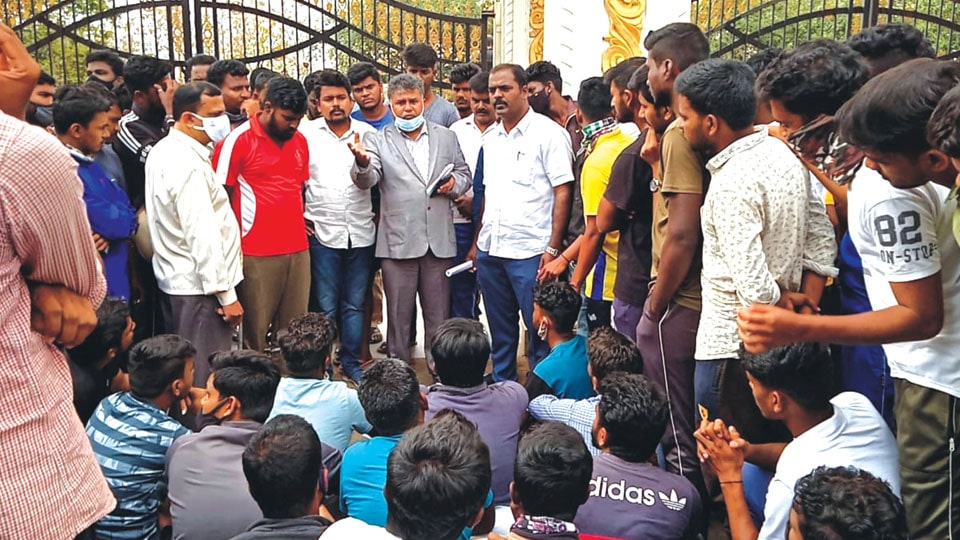 Mysore/Mysuru: Alleging lack of civic amenities and poor quality of food, over a hundred students of the Old and New Post-Graduate (PG) Men’s Hostels at Manasagangothri staged a snap stir near Kuvempu Statue at the entrance to the campus from Bogadi Road side this morning.

Claiming that the inmates of the old and new hostels were served food at the common Dining Hall in the old PG hostel, giving a go by to physical distancing norms and other COVID-19 protocol, the protesters alleged that despite several representations to the hostel authorities, they are being served with sub-standard food, with go by given to daily menu.

Also, the hostels lacked civic amenities such as drinking water and sanitation facilities, they alleged and urged the authorities to immediately address the issues raised by them, considering their health and safety.

They also demanded that they be provided with laptops as promised by the Government.

Upon coming to know of the snap stir, University of Mysore (UoM) Registrar (Administration) Prof. R. Shivappa and Student Welfare Officer S.T. Ramachandra visited the spot and assured the protesters that the issues raised by them will be addressed in a couple of days, following which the stir was withdrawn.

The protest was led by UoM Research Students Association leader Maridevaiah and others.

Meanwhile, Registrar Prof. Shivappa, speaking to Star of Mysore this morning, said that the hostel students have submitted a memorandum seeking  better quality food and  adequate drinking water. They have also demanded distribution of laptops to everyone as promised by the Government and also to re-open the shut gate facing Hunsur Road beside a vehicle show room,  he said.

Stating that practical measures will be taken to address the issues raised by the hostel students, he said that the distribution of laptops has to be done by the Government.

Maintaining that the University has written to the Government in this regard a couple of times, he said that, however, the University too is looking at other ways of laptop distribution from its side.

In respect of the demand for a separate kitchen, he said that the University has planned a centralised kitchen system to cater to the needs of students and added that the University will take all possible measures to ensure the safety, security and health of all students.