Home » Columns » The State as a conspiracy ? 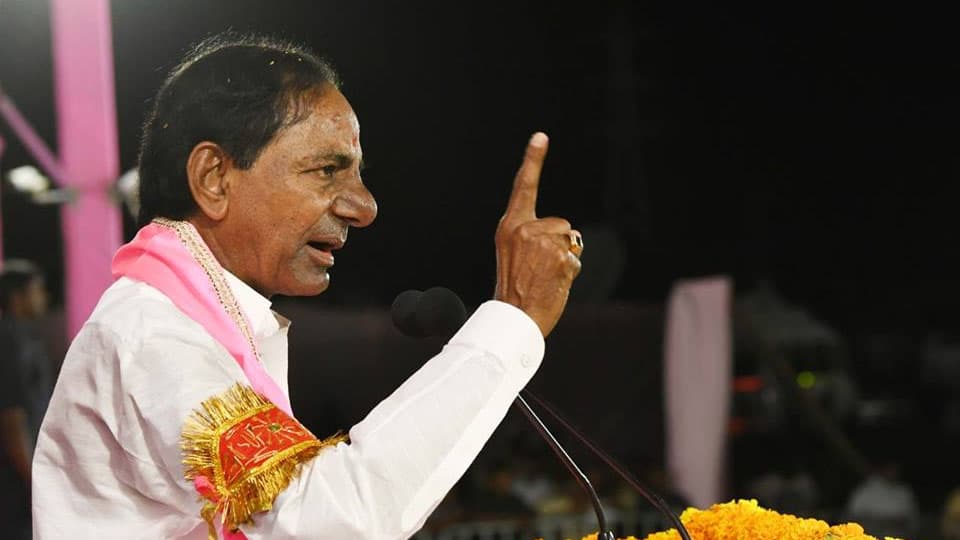 The State as a conspiracy ?

As Chief Ministers go, K. Chandrasekhar Rao (KCR) is in a class of his own. He is known as an effective speaker and he is a good tactician. These were factors in the success of his mission to carve Telangana out of the original Andhra Pradesh. His decision to dissolve the assembly and go for an early test at the hustings was a smart move from his point of view. He is a man of ability and, therefore, if he wins, he can do much good for the country. To do that, however, he must pay attention to at least three areas where a new approach will be essential.

The first is the I-Me-Myself style in which he handles his party, the Telangana Rashtra Samiti. He is the boss of course, but flaunting bossdom reduces one’s stature. He doesn’t really consult any one in the party. Advancing the election was an example of this. No one knew what he was planning. Without even waiting for an election notification, he announced 105 candidates, to their surprise.

Some may interpret this as a strategic masterstroke in that he struck before the Opposition parties had time to realise what was happening. But the cost of such tactics is high. When all decisions are handed down from the Abode of Shiva as it were, discontent is inevitable across the board. Protests did rise this time from a few of his followers. Critics from other parties described him as “monarch, autocrat and despot.”

The second area where KCR would benefit from a new approach is his habit of extending his religious beliefs into the public domain. As Chief Minister, he boycotted the State’s administrative headquarters, where the Chief Minister’s Office is situated, for reasons of vastu and improper designs in terms of setbacks and exit points. He built a new vastu-compliant home-cum-secretariat structure sprawling over one-lakh square feet of living space on a 9-acre estate costing Rs. 36 crore.

There is nothing wrong in having faith in vastu or fixing programmes as per astrological rules. But the State’s treasury cannot be used to foot the expenses when a Chief Minister desires to “fulfil his vow” and present gold ornaments to various Gods. KCR travelled with his family in helicopters and chartered flights to make his offerings. In Tirumala alone the gold offered was worth Rs. 5 crore. He said, of course, that all expenses were met from his personal funds and bank loans.

The third area where KCR should have second thoughts is the language he uses. He recently described Rahul Gandhi as the country’s “biggest buffoon.” He called Chandrababu Naidu a lizard, said that Naidu had a “thief’s look” and was neechaa neechamaina (meanest of the meanest) Chief Minister in the country. He said his party would “drag Sonia Gandhi to bazaar.” And so on and on.

Such remarks do get cheap applause from street crowds. But KCR should ponder over the fact that his abuse of Sonia Gandhi met with disapproval from his own rank and file. He is a man who holds a Constitutional position. In our Constitutional system, even enemies call one another “The honourable” inside the legislature. By observing basic rules of decency in public discourse, a leader will only enhance his stature. Likewise, abandonment of decency will only diminish him.

There is something almost visceral about KCR’s hatred of Andhra Pradesh. He was once quoted as saying that he didn’t want to be associated with anything that had an Andhra lineage. This is like one of a conjoined twins saying that he doesn’t want to touch the other. Not all KCR’s oratorical powers and temple offerings can nullify geography. In fact, he should be grateful for what he has already got. Nizam’s Hyderabad comprised a piece of Maharashtra (Marathwada), a piece of Karnataka (still known as Hyderabad Karnataka) and a piece of Teluguland called Telangana. Only Telangana succeeded in becoming a State on its own. A wise leader will rejoice in this and collaborate with the conjoined twin.

READ ALSO  When AG is worried, it's serious

The Scottish independence movement has been a powerful one for decades. There is a separate Scottish Government headed by a First Minister. But when a referendum took place four years ago, 55 percent of the population voted to remain part of the United Kingdom. Geography prevailed. KCR will become a greater leader if he realises that he has only two options — either to accept geographical reality and cooperate with his neighbours or prove that Tolstoy was right when he said: The State is a conspiracy.