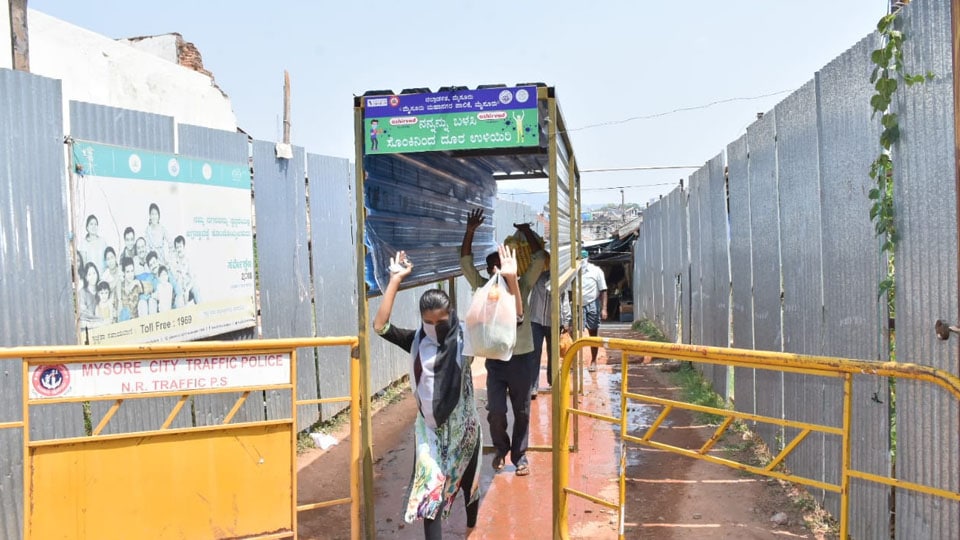 The man behind walk-in kiosks and disinfectant tunnels

The designated COVID-19 Hospital (District Hospital, Mysore) on KRS Road has set up low-cost walk-in kiosks at its premises for safe collection of swabs of symptomatic people by the medical staff without direct exposure and contact with patients.

The man behind these walk-in kiosks, known as Swab Testing Cubicles is Ramesh Kikkeri, a resident of Bogadi in city. A post-Graduate in healthcare management and environment management, Ramesh Kikkeri is serving as the Disaster Management Advisor since many years.

Following COVID-19 pandemic, he has voluntarily joined hands with the District Administration and is also serving in the COVID Care Committee.

A team led by Ramesh has installed three Swab Testing Cubicles at the COVID-19 Hospital and has also readied two more STCs which are waiting to be transported to the Mandya District Hospital. Also, Ramesh and team have also installed disinfectant tunnels, which are being used at various places in city.

Shaped like an old telephone booth that is closed from four sides, one side of the Swab Testing Cubicle is made of glass with two openings where detachable and disposable rubber gloves are fixed. The gloves are fixed for the medical staff to insert hands and collect swab samples from symptomatic patients. Also, the medical staff can collect swabs from inside the Swab Testing Cubicles without wearing Personal Protective Equipment (PPE).

While one Swab Testing Cubicles at the COVID Hospital is made using steel frames, the other two is made with aluminium. The cost of each Swab Testing Cubicle is Rs. 20,000 and as they are light in weight, it could be carried from one place to another.

While two disinfectant tunnels are installed in K.R. Hospital premises, temporary vegetable markets on M.G. Road and at Alanahalli has one tunnel each, one tunnel each in Central Prisons, Devaraja Market, RMC Market, APMC Yard in Nanjangud and Star of Mysore Office, three tunnels each in Mysuru APMC Yard and L&T company. Ramesh has also given suggestions in the making of Sanitiser Bus by the KSRTC.

Also, the team led by Ramesh has installed the tunnels (one each) at the RMC Market on Sayyaji Rao Road, Central Prison, near Devaraja Market on Dhanvantri Road and at the Nanjangud APMC Yard.  While the cost of most of these disinfectant tunnels has been taken care of by the district administration, some have been sponsored by a few organisations and corporate companies.

No harm in sodium hypochlorite disinfection

“There are rumours doing rounds that spraying sodium hypochlorite solution is harmful. This is false. A few mischief-mongers are spreading such fake messages. As per the recommendation of World Health Organisation (WHO), one kilogram of Sodium Hypochlorite is mixed with 100 litres of water to make a solution, which is being sprayed in the disinfectant tunnels,” Ramesh said.

“Public need not panic while using the disinfectant tunnels. There may be itching sensation for a few persons which is not dangerous. At present, no other chemical apart from sodium hypochlorite has been considered as anti-viral. Until a suitable chemical is made available, Sodium Hypochlorite has to be used,” he added.

Ramesh said that they have so far installed 15 disinfectant tunnels and added that there are demands from private companies to install the tunnels in their premises. He said that each tunnel would cost within Rs. 40,000. Ramesh Kikkeri can be contacted on Mob:  96205-43516.