Home » Columns » Abracadabra By K. B. Ganapathy » The Rotary Journey: To S. Korea and Japan —5 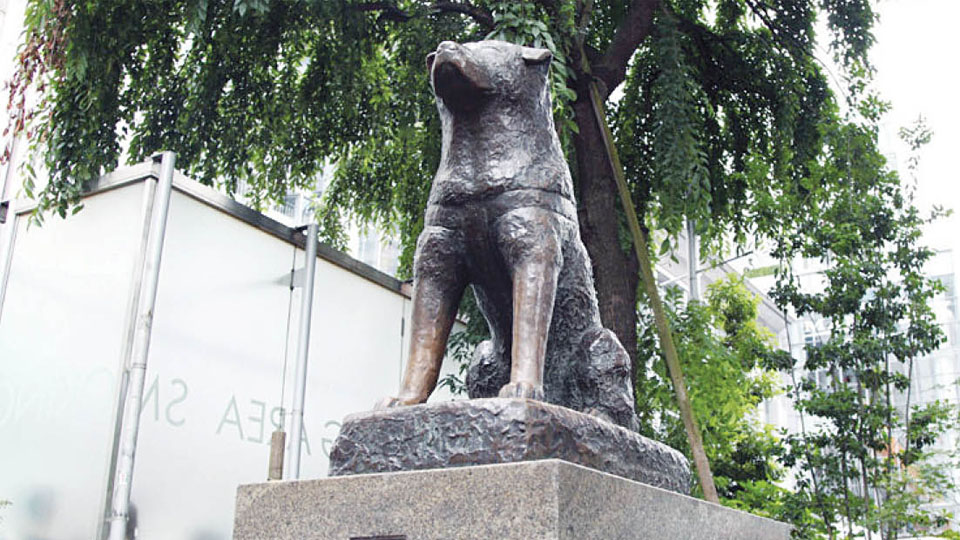 The Rotary Journey: To S. Korea and Japan —5

The world is a book and those who do not travel read only one page.”—St. Augustine

Let me pick up the Japanese thread that I had dropped on Dec.12, 2018 and weave the narration today almost two weeks into New Year 2019.

After spending a night in Narita, the city with an International Airport, we left for Tokyo, the capital of Japan, and checked into a hotel by noon and did some shopping till dinner. The following day we decided to visit a park, China Town at Yokohama and the great Buddha statue at Kamakura.

This went on for over an year and the Professor suddenly died of brain haemorrhage in 1925 while delivering a lecture in the University. But Hachiko waited for the Professor at the Railway Station for the arrival of his master whom he could not see thereafter.

According to the legend, Hachiko waited for nine-and-a-half years at the Railway Station for his master to arrive and one day Hachiko died of cancer after 10 years of waiting in 1935. The good people of that place buried Hachiko next to his master’s grave in Tokyo and even installed a bronze statue at the Shibuya Railway Station in memory of Hachiko’s faithfulness. Ever since, Hachiko’s statue has become a tourist attraction along with other places like the China Town and the Buddha statue.

Hachiko Square (sometimes called Hachiko Plaza) is perhaps the busiest and best-known meeting place in Tokyo. Named in honour of the famous statue of “Faithful Dog Hachiko,” it is fenced in by a department store, two train stations and the well-known Shibuya pedestrian scramble crossing that is said to be the busiest in the world.

Being in Tokyo and being a MRC Member, I grabbed the opportunity to visit the famous Tokyo Race Course when the suggestion came from K.G. Ananthraj Urs, Secretary of Mysore Race Club Ltd.  (MRC) and MRC Steward H. Kusumakar Shetty. It is located about 20 miles from Tokyo proper and was established in 1933. Since then, it has been the star-studded race course for numerous unforgettable races where Punters from all over the world arrive. Surprisingly for us, the majestic view of Mount Fuji, the most widely recognised symbol of Japan where our group was scheduled to visit the following day, could be seen from the race course, more clearly from the world-class ‘Fuji View Grand Stand.’

We three had the benefit of seeing this place as there was no race on the day of our visit. Imagine, the Grand Stand boasts of being Japan’s largest with a seating capacity of 19,000. There was a new Grand Stand as well with ‘Multi-Screen Turf Vision.’ We found it an amazing race course occupying a very huge area with a Rose Garden, Japanese Garden and children’s  entertainment area like an amusement park. I was told the Japanese Derby and the Japan Cup races attract nearly two lakh Punters. Think of the money the race course must be making.

There is a museum which cannot be described here in words, it should only be seen to believe in the creative genius of Japanese people. The name of a famous jockey and his photographs and the encomiums showered on him were displayed pictorially at the entrance to the museum and the lobby.

When we left the race course, the officers in-charge gave us mementos and their car to drop us at our hotel, a gesture we never expected. So far everything was nice about Japan and the Japanese, particularly known to bow at the drop of a hat, as they say, when they greet another with a smile.

However, we had a different experience at an Indian restaurant where we had been for our lunch. Ananthraj Urs, Kusumakar Shetty and myself mounted the bar stool and asked for Whisky — Johnnie Walker Black Label. Simultaneously, Kusumakar Shetty asked the barman with a thick, well-clipped beard where was he from as he was looking much like an Indian in an Indian restaurant. With a poker face he said, “From Japan.” “But you don’t look like a Japanese,” said Kusumakar. It was then he blurted that his father was a Nepali and his mother a Japanese. Even as he was saying this, I saw him holding the liquor-measure under the counter and pouring the Whisky, then quickly pouring it to the glass atop the counter. I whispered to Kusumakar about the barman giving us short-measure. To my predicament, Kusumakar asked him right away why he didn’t give the full-measure? He was apparently upset and said “I am not a cheat.” Immediately, Ananthraj said that we did not use that word.

Anyway, there was an exchange of unpleasant conversation but the remaining two measures were correct. As we were sipping the drink, I told my friends, “Now you know why our country is backward after 71 years of independence, while Japan, even after the devastation of the World War II is among the most developed countries of the world.”