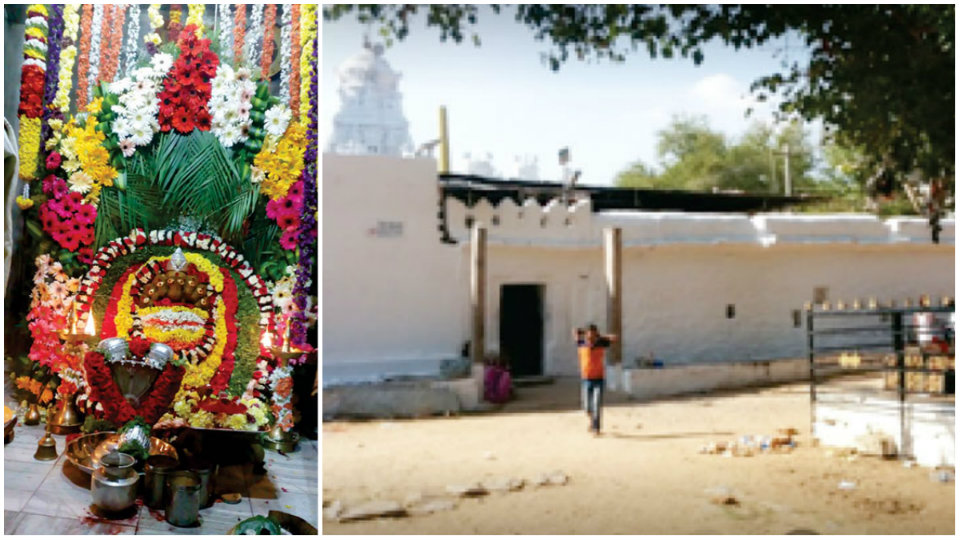 The untold story of Nagalamadike

It is believed that visiting all three temples between sunrise and sunset would relieve people of Shukra Dosham (malefic effects of Venus).

While Triranga Darshanam is dedicated to Lord Vishnu, there is a similar belief with regard to Lord Subramanya, also known as Lord Karthikeya, elder son of Lord Shiva and Goddess Parvathi. Among the temples dedicated to the Snake God (Karthikeya) in Karnataka are the famous Kukke Subramanya in Sullia taluk of Dakshina Kannada district and Ghati Subramanya in Doddaballapur taluk of Bengaluru district. But not many in this part of Karnataka are aware of another famous Subramanya Temple located at a village called Nagalamadike in Pavagada taluk of Tumakuru district.

According to legends, Lord Sri Rama is said to have stayed at Nagalamadike along with his younger brother Lakshmana. History says that Nagalamadike was dominated by Brahmin community and among them lived Annabhatta, an ardent devotee of Lord Subramanya who used to visit Kukke Subramanya during the annual fair.

Once Annabhatta could not reach Kukke on time owing to his age and to the surprise of other devotees, the chariot carrying the idol of the Lord at Kukke Subramanya did not move despite being pulled by devotees. Later, the Lord is said to have appeared before the devotees and informed them that he was waiting for the arrival of Annabhatta and only then the chariot would proceed further. Subsequently, Annabhatta arrived and the annual car festival went on smoothly.

After the festival rituals were completed, Lord Subramanya is said to have appeared before Annabhatta in the form of a vatu (Brahmin boy) and instructed him not to travel to Kukke anymore and instead asked him to take the Nagabharana from Kukke Temple and continue to worship at Nagalamadike village. As per the Lord’s advice, the Nagabharana was brought to the village where it is still being worshipped in the temple built on the Northern bank of River Pinakini.

Lord Subramanya is also said to have appeared in Annabhatta’s dream and instructed him to find his idol on the banks of River Pinakini. Subsequently, on ploughing the land, the idol of a seven-headed snake (Lord Subramanya) was found on the Northern bank of the River where the temple now stands. Since then the place got the name Nagalamadaka (in Telugu) where ‘Nagalu’ means snake and ‘Madaka’ meant plough. Later it came to be known as Nagalamadike (in Kannada).

The temple was constructed by a businessman by name Balasubbaiah, who used to travel through Nagalamadike village en-route to Ballari. Originally from a village called Rodham in Penukonda in Andhra Pradesh, Balasubbaiah had vowed to build a shelter to Lord Subramanya on his business becoming a success. When Balasubbaiah became a successful businessman, he built the temple to fulfil his vow.

The Annual Brahmarathotsava is held on Pushya Shuddha Shasti according to panchangam. This temple, located on the border of Andhra Pradesh, attracts devotees from the neighbouring State and also Tumakuru in Karnataka. The puja rituals at the temple is being performed by a group of priests headed by P. Badrinath as the Chief Priest. Rituals such as Sarpasamskara, Nagaprathiste, Nagadosha Parihara, Ashlesha Bali and others are performed here.

The main temple premises also houses the temples of Lord Shiva and Lord Anjaneya. The temple is open in the morning between 8 am and 1 pm and in the evening from 4 pm to 7 pm. On weekends, the temple attracts more visitors than normal days.

Distance and stay: Naga-lamadike is around 290 kms from Mysuru. The place can be reached via Tumakuru, Madhugiri and Pavagada. For those who wish to stay overnight can stay at hotels in Tumakuru and return to Mysuru the next day or they can return the same day.

Lord Subramanya Nagalamadike
When my half-truth gave confidence to my friend…
The times when the sky fell on me!

2 COMMENTS ON THIS POST To “The untold story of Nagalamadike”