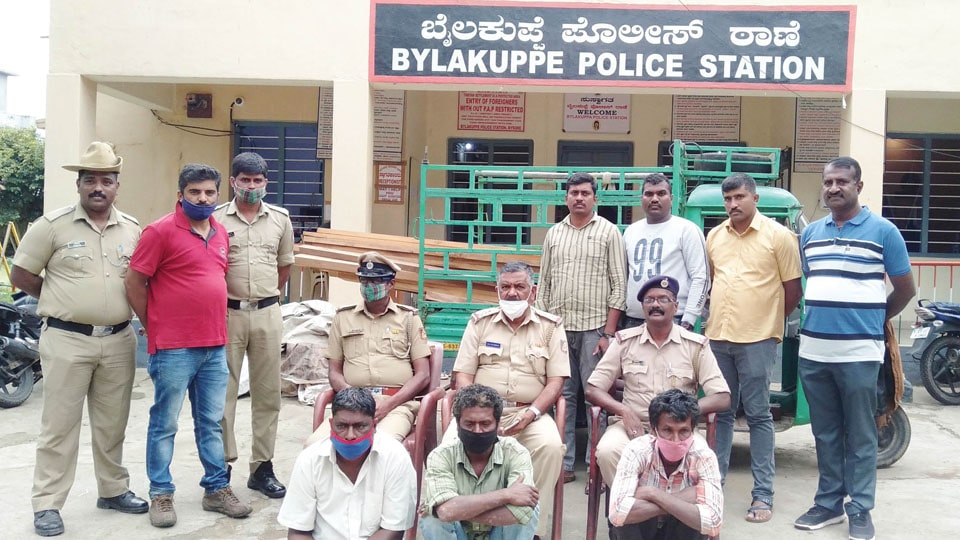 Bylakuppe: Bylakuppe Police have arrested three persons for stealing Jungle Jack furniture wood and have recovered the stolen wood worth Rs. 1.20 lakh from them.

The arrested are 48-year-old Srinivas and 47-year-old Ameer of Koppa Village and 46-year-old Faizoz of Girugoru village in Periyapatna taluk.

One Murugesh of Madapatna village in Kodagu, had taken a house belonging to Puttabasamma near the Golden Temple on rent and had stored Rs. 1.20 lakh worth Wild Jack or Jungle Jack wood used for furniture making in the house.

But the three accused had somehow managed to steel the wood from the house. Murugesh, who came to know about the theft, had lodged a complaint with Bylakuppe Police.

Bylakuppe Inspector M.S. Puttaraju, based on the complaint, had registered a case and along with ASIs Shivaraj and NanjundaRajeUrs and staff Jayakumar, Somashekar, Siddaraju, Shivanna, Shatrugna, Mahadev, Annaiah and Umesh, began their investigation and cornered the accused along with the stolen wood and finally arrested them.

The accused were produced before the Judge at Periyapatna Court, who remanded them (accused) to judicial custody.