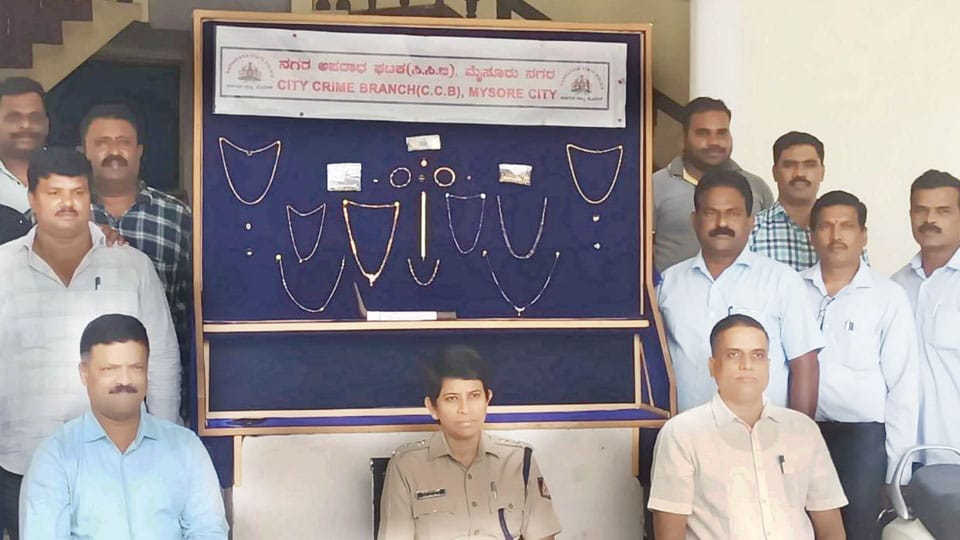 Mysore/Mysuru: The City Crime Branch (CCB) sleuths have cracked three chain-snatching cases that occurred within the city limits, two vehicle theft cases in Mysuru and Bengaluru and one house burglary case in Hassan with the arrest of three notorious criminals who continued to commit crime despite being caught.

Interestingly, the accused had teamed up at Mysuru Central Jail to commit more crimes and came out on bail to execute the crimes. Based on definite clues, CCB sleuths arrested two persons on June 14 near Bannimantap LIC Office and one from Mandya Railway Station on June 15. Before their arrest, they were found moving suspiciously.

On interrogation, the trio told the Police that they were involved in three chain-snatching cases in Saraswathipuram, Kuvempunagar and Vijayanagar, two two-wheeler thefts in Vijayanagar Police limits and Subramanyapura Police limits in Bengaluru and one house burglary case in Hassan’s Pension Mohalla.

Gold ornaments weighing 280 grams, a 20-gram silver coin and three two-wheelers have been recovered from the accused.

With their arrest, the CCB has been able to crack the cases and bring the accused to book.

A press note from the City  Police Commissioner said that the three accused are past offenders and that accused number 1 is involved in 10 cases, accused 2 was part of two cases and accused 3 was involved in one case. They had been arrested by the CCB Police and were sent to jail. Accused 1 was jailed in a case that was registered in Lakshmipuram Police Station.

In the jail, the three developed friendships and decided to continue their criminal activities. They later obtained bail in their respective cases and committed crimes.