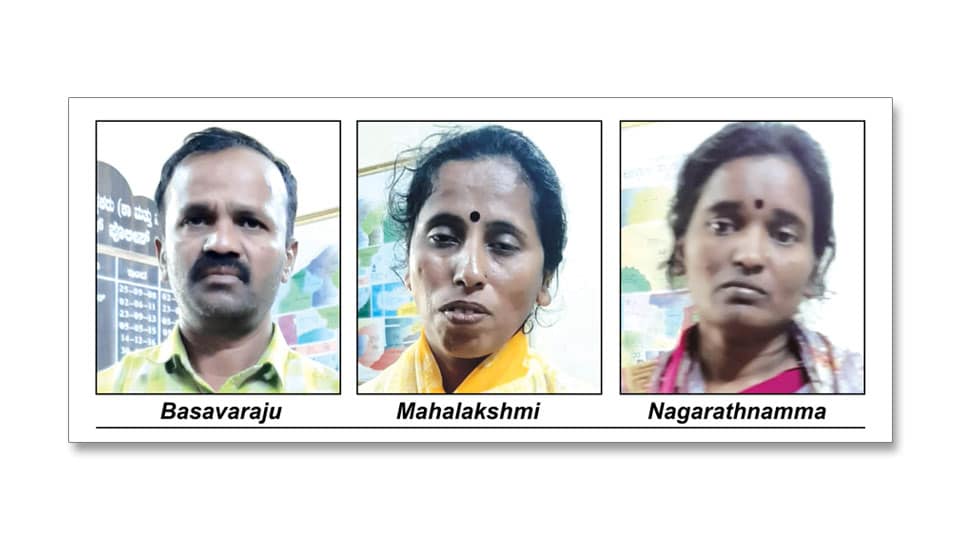 Kollegal: Kollegal Town Police have arrested three persons including two women for allegedly blackmailing a priest and extorting Rs. 19.95 lakh and a gold chain weighing 18 grams from him after threatening to ‘expose’ him in TV channels.

The priest, fearing social stigma and reputation, had meekly handed over the money but filed a Police complaint when the blackmailers demanded Rs. 50 lakh.

The arrested have been identified as 42-year-old Basavaraju, his wife 35-year-old Mahalakshmi alias Sarojamma and her sister 35-year-old Nagarathnamma all from Hessarghatta near Bengaluru. The Police have seized Rs. 17.77 lakh cash and the gold chain from the accused.

The victim, T.V. Sreenivasa Raghavan is serving as a priest at Kollegal Sri Anjaneyaswamy Temple and he is a well-known name in astrology and many people would come to him to seek spiritual and astrological advice. People used to come from far and wide to consult him on various issues and even Sreenivasa Raghavan used to go to their houses to perform pujas and other rituals.

Three years back, Basavaraju and his wife Mahalakshmi approached Sreenivasa Raghavan and performed several rituals at the Anjaneyaswamy Temple. Both the families became closer and the priest too went to Basavaraju’s house at Hessarghatta and performed pujas there.

She demanded Rs. 3 lakh from the priest.  Fearing consequences and social stigma, Sreenivasa Raghavan, though innocent, agreed to pay Rs. 3 lakh as he dreaded his name being flashed on TVs. Even after the money was paid, the blackmailing did not stop. Mahalakshmi would repeatedly call Sreenivasa Raghavan and demand for money. She also took away his gold chain weighing 18 grams. In all, the Priest ended up paying Rs. 19.95 lakh to the blackmailers.

Basavaraju and Mahalakshmi was joined by the latter’s sister Nagarathnamma, who also blackmailed the priest. On Nov. 8, Sreenivasa Raghavan filed a complaint with the Police after the blackmailers demanded Rs. 50 lakh. Laying a trap, the Police asked Sreenivasa Raghavan to inform the blackmailers to come to Kollegal and take the Rs. 50 lakh. They were asked to come to a place in Maddur where a Police team was waiting.

As per plan, Basavaraju, Mahalakshmi and Nagarathna came to Maddur on Nov. 9 and the Police easily arrested them. They were later produced before a Court and have been sent to judicial custody.