Home » Columns » Abracadabra By K. B. Ganapathy » Our leaders must look at the survival of our country 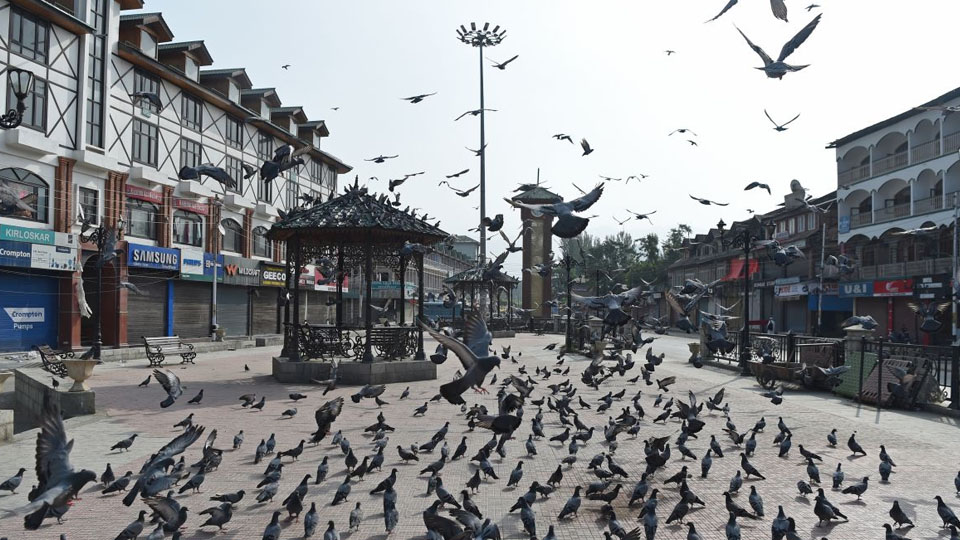 Our leaders must look at the survival of our country

In the Book Talk column of Star of Mysore dated Nov. 13, 2019, I saw a brief write-up on the book “Kashmir’s Untold Story Declassified” by Iqbal Chand Malhotra and Maroof Raza. Since I am a great fan of Maroof Raza, that highly cultured and learned person who often participates in TV panel discussions and the write-up was by R. Chandra Prakash, a social activist and former President of Mysore Grahakara Parishat (MGP), a well-known NGO of our city, I decided to read the original book itself and learn more about J&K at a time when our Prime Minister Narendra Modi and Home Minister Amit Shah put an end (hopefully) to the tyranny of Muslim majoritarianism of 72 years in a Secular country.

In the past 40 years of my editorship of Star of Mysore, I have written a number of articles about J&K in this column. British betrayal of Hindu (Secular) India was clear from the very beginning, in fact before and immediately after Partition.

The book says that most historians are unaware of the fact that the British Governor of the North West Frontier Province (NWFP) Sir George Cunningham had been cleverly planning for the Partition and Transfer of Power since 1944. A Frontier Committee was formed to recommend a new Frontier policy and this Committee recommended that Regular Indian Army troops be withdrawn and replaced by tribal levies (tribal forces) and the recommendation was immediately implemented.

The immediate effect of this was removal of all Hindu and Sikh Army Officers and soldiers from NWFP, the Northern Frontier of India (J&K). This was followed by disbanding of the Indian Army at the Baluchistan Frontier. In April 1946, the British Indian Army Commander-in-Chief Field Marshal Sir Claude Auchinleck called a high-level conference and took a unanimous decision to replace regular troops in all tribal areas and replace them with tribal scouts and Khasadars. Like-wise steps were taken in other Commands too till 23rd July 1947. See the time line! India got Independence on 15th August 1947. So it was clear that British Army Chief Field Marshal Auchinleck had planned and facilitated the so-called ‘Tribal Attack’ on Kashmir by Pakistan long before the Partition of India on 15th August 1947.

The book makes an important disclosure, with proof, that the British State was involved in the ‘Tribal Attack’ that took place under the code name ‘Operation Gulmarg.’

There was a district in the Northern Frontier of British India known as Bannu. The Political Agent of Bannu in August 1947 was one Arthur Dredge. Bannu Army Brigade’s Brigade Commander was one Brig. C.P. Murray. On 19th, August 1947 (five days after India got Independence) Brig. Murray was on duty, 41 kms away from Bannu.

The Political Agent Arthur Dredge was the only British Officer at work that day in Bannu.

In the absence of Brig. Murray, a Sikh Officer, Maj. Onkar Singh Kalkat, was in-charge of the Brigade. “On 20th August 1947, a courier arrived carrying a demi-official letter from Gen. Sir Frank Messervy at General Headquarters in Rawalpindi. As he was authorised to do so, Maj. Kalkat opened the letter. Attached to the letter was an appendix entitled, ‘Operation Gulmarg — The plan for the Invasion and Capture of Kashmir.’ The day for the commencement of the operation was 20th October 1947.”

As I continued to read further, my heart began to feel for Maj. Onkar Singh Kalkat. I remembered the lament of my old friend from Intelligence Bureau (IB) who was never tired of telling, “For whom the bell tolls?” in our country. So much of patriotic zeal and love for the country by men like my IB friend and Maj. Kalkat at the risk of their personal freedom and life. To what end? If the men in power at the helm are lacking in patriotism and love for the country, of what avail is the sacrifice by those who work for the security of our country?

How should our leaders at the top as President, Prime Minister, Defence Minister or those of similar responsibility respond to matters relating to our country’s defence and security? I would say our leaders should be like Donald Trump, Narendra Modi or the Israeli Prime Minister Benjamin Netanyahu. For Donald Trump it is “America First.” So also for our Prime Minister Narendra Modi it is “India First” and for Benjamin Netanyahu “Israel First.” I was reading an interview given by Netanyahu to the Time magazine of America. Here is the question and his answer.

TIME: What has been the key to your political survival?

Netanyahu: I don’t look at my survival. I look at the survival of the country, its durability, its future.

As a true, loyal Officer of the forces Maj. Kalkat, a troubled man now, calls up his Brigade Commander Brig. C.P. Murray and related his startling discovery about ‘Operation Gulmarg.’ Brig. Murray rushed back to Bannu the very next day (21st August 1947) and was equally disturbed. He realised that Maj. Kalkat’s life would be in danger if people came to know that he knew about the ‘Operation Gulmarg.’ Apparently under advice and help from Brig. Murray, Maj. Kalkat dispatched his wife and son to India. Later, how Maj. Kalkat reached India and Delhi was an odyssey. However, luck was on Maj. Kalkat’s side. He was smuggled out by his faithful Muslim soldiers to safety… but his travails did not end as he was found out by the Pakistani authorities who were hunting for him. But, again a kind British Base Commander refused to hand him back. Maj. Kalkat then reaches Amritsar in a goods-train and lands in Delhi, the capital of Hindu India, nay Secular India.

The book narrates what happened in Delhi in a matter of fact manner. But as a Nationalist Indian, my eyes went wet while reading what was written. Let me quote:

“That same day, he met Maj. Gen. Kulwant Singh and Maj.Gen. P.N. Thapar and briefed them about the information he had about Operation Gulmarg. Both Thapar and Singh were unconvinced, but were duty-bound to take him to meet the Defence Minister, Sardar Baldev Singh, on 19 October. The invasion was three days away. A sceptical Baldev Singh asked the Army’s Intelligence Directorate to verify Kalkat’s account. However, the British staffed Intelligence Directorate paid no heed to Kalkat’s account and no action was taken!”

When on 15th October 1947, the new Prime Minister of J&K Justice Mehr Chand Mahajan, met a group of Hindu and Sikh refugees from Pakistan, they too reported that they had seen large concentration of tribal Afghans in the area around Abbottabad (do you remember the name?). The Prime Minister of J&K ignored the information.

It was only after the invasion — Operation Gulmarg — had started in full swing that the importance of Maj. Kalkat’s warning was taken seriously. Maj. Kalkat was taken before Prime Minister Nehru on 24th October, 1947. But it was now too late…

Reading this I was reminded of how our Officers ignored the warning given by shepherds of Kargil about the presence of Pakistan Army personnel on our territory in 1999. George Fernandes, the then Defence Minister, who had visited the area had told the press that the same shepherds had told him about the intrusion by Pak Army. But it was too late… Result was Kargil war. Intelligence report was not taken seriously as in 1947!

Well, have we not seen how the Indian Government handled terrorism in the past till, by God’s grace, people voted for BJP and Narendra Modi became the Prime Minister? In their thirst for power, protecting the vote-bank became more important than protecting the country from terrorists.

Do our leaders know that because of our own blunders like those mentioned above, India lost two parts of J&K? In 1947 we lost Gilgit and Muzaffarabad (PoK) that were swallowed by Pakistan. And in 1950 China swallowed up a larger part of Ladakh. Our leaders must introspect and find an answer to Dr. Babasaheb Ambedkar’s eternal question: If India loses, who wins?

ABRACADABRA Jammu and Kashmir K.B. Ganapathy
A Tribute… from a Reluctant Pupil !
Three including two women arrested for blackmailing priest