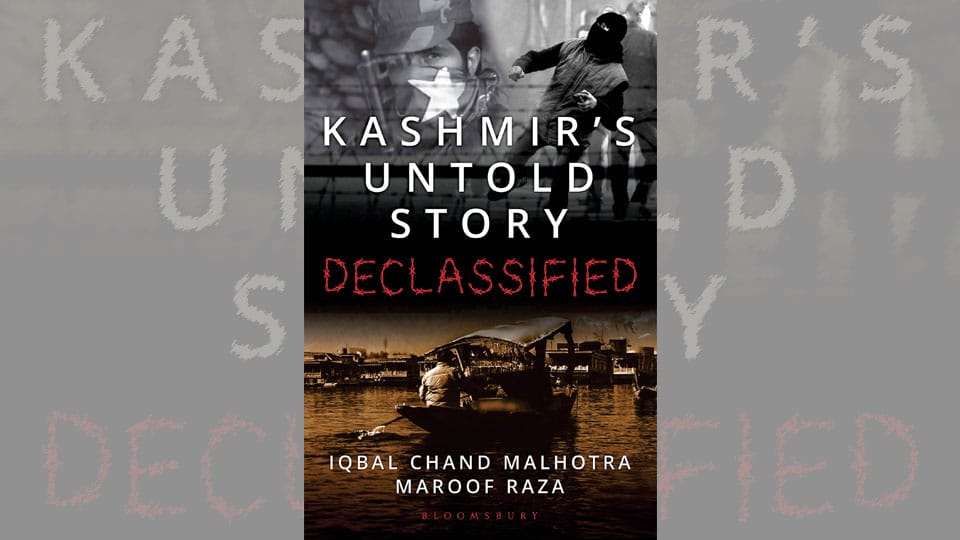 Kashmir is acclaimed as the Heaven on Earth. However, it is also a political hotspot of the world. With the abrogation of Article 370 and 35A on 5th August 2019, this book is a very timely publication concerning the State of Jammu & Kashmir (J&K).

It is a highly researched book written by two hard-boiled professionals. Iqbal Chand Malhotra has roots in Kashmir and has had links with Royal family of J&K. He has to his credit several TV shows and publications depicting different shades of grandeur and problems of J&K.

Maroof Raza is a very well- known face on television. His commentaries and analysis on defence matters, more particularly regarding complex issues of J&K, have roots in his military service apart from his prolific writings.

Ten chapters of the book cover very important and highly complex historical narratives of the State of J&K.

In the first few chapters, the authors narrate the historical links of this land with Alexander the Great, Christ and the Mohammed. Ashoka the Great is stated to have brought Buddhism to this land in the mid 3rd century BC. In 1339 Sultan Dynasty replaced Hinduism and Buddhism with Islam. Nund Rishi was the Patron Saint of the land. Due to suppressive rule of Sultans he converted into Islam and adopted  a new name — Sheikh Nur-ud-Din Wali (Light of the Faith).

He is said to have preached tolerance which is said to have given birth to culture of Kashmiriyat.  Mughals ruled this land for 166 years, between 1586 and 1752. Thereafter, there was 5-year rule of Durranis from Afghanistan.

British annexed this land in 1757. The authors have analysed the shifting geo-political scenario manoeuvred by shrewd and cunning British rule. Once being a geographical part of large Punjab Princely State, its boundaries included Baltistan and Gilgit bordering Afghanistan, Russia and China. This became the cause for extraordinary interest to the British.

In the next few chapters, the authors very deftly narrate the British political manipulations. It is quite revealing to learn that British created a Deep State within its administration to ensure that the Northern part of Baltistan, Gilgit and North West Provinces remained under their political control. So much so, this Deep State manipulated the decisions leading to and after Independence.

The book reveals as to how this Deep State became manipulators of foreign policy of Pakistan till as late as 1960s. Creation of ISI and its nefarious activities have origin in British Deep State. Obviously, the anti- Hindu stance of Pakistan and thousand-cuts  policy to bleed India have been tempered by the British dislikes of Hindus and India as well. How politician Syed Mohammed Yusuf Shah went on to become Syed Salahuddin, dreaded head of Hizb-ul-Mujahideen now in Pakistan, also is revealed.

Pakistani involvement in the political destabilisation of Kashmir is very succinctly narrated. Authors blame the indecisiveness and lack of clarity in India’s policy towards Kashmir as the main reasons for the turmoil.

As the book is published some time in August-September of 2019, Postscript integrates the earlier chapters with the current situation arising out of the removal of Article 370 and 35A as a right approach to bring true secularism, equality, prosperity and peace to Kashmir.

This book is well-presented with many Images, exhaustive Endnotes and helpful Index. It is a readable and very informative book.