Home » Columns » A Tribute… from a Reluctant Pupil ! 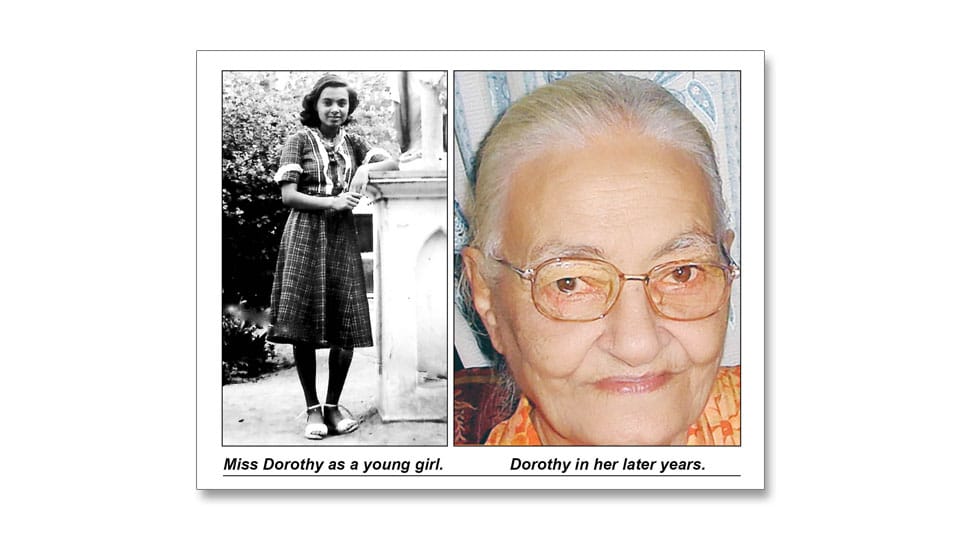 A Tribute… from a Reluctant Pupil !

This morning I attended the Month’s Mind Mass held to pray for the soul of Mrs. Dorothy Fernandez, who passed away at the age of eighty six on the 15th of last month. She was my music teacher when I was studying at the Good Shepherd Convent Primary School during the early sixties and I was perhaps her most reluctant pupil ! I say this because I was a very reluctant pupil not just in music but also in almost every other subject because the whole concept of anyone trying to educate me or anyone else for that matter in a closed classroom was anathema to me.

When I started my schooling I was a jungle-bred brat who had spent all his walking days exploring the wide countryside in a large coffee estate. The only thing I enjoyed doing was exploring every thicket in pursuit of spiders, snakes or lizards and climbing trees to pluck and eat different kinds of wild berries which used to stain my teeth and lips a brilliant red or a deep purple. Thankfully, the workers on our estate in whose company I used to always be had taught me from a very early age which ones of those were safe to eat and which ones I had to stay away from.

It is a different matter that on more than one occasion I did try to sample a few of the proscribed ones too with some very unpleasant results. Well, you cannot blame me entirely for this as we all know very well that forbidden fruit has had the greatest attraction for mankind over the ages which is why we are all here on this earth instead of still being in heaven!

Since my first school was the wide countryside I naturally developed an aversion to my formal schooling process which started when I was five and I quickly became an expert in finding ways and means to skip going to school. One day it could be a completely fake stomach ache and on another it could be an overcast sky or even a broken slate pencil. My teachers who had all seen reluctant students like me all through their teaching years could see through every one of my tricks very easily and would evolve ways and means of bringing me around.

Of all my teachers Miss Dorothy was undoubtedly the one who had the toughest time in taming me because in addition to my hatred for school I somehow had an intense aversion for singing and music which is what she used to teach. Her class was always the last class of the day when we would all be marched to the large singing hall with Gothic doors and windows and made to stand in orderly rows. The session would start with an announcement by Miss Dorothy about the songs we would have to sing for that day. That is when I would start looking out of the window nearest to me to locate my favourite family of Mynahs or monkeys that used to be frolicking on the row of tall Indian Cork (Millingtonia hortensis) trees just outside the hall. They were my greatest source of relief from the sorrow of singing!

But since Miss Dorothy was well aware of my frequent spells of distraction she would look out for me as eagerly as I would look out for my arboreal friends and motion me to pay attention to my singing which used to have only a very brief effect. That was when she used to walk up to me and holding my hand in hers, lead me to the place where she used to sit and play the grand piano. But she used to do all this without a pause in her melodious singing!

After the singing class she would hug me and pat my back and compliment me on my great performance and tell me that I would one day become a great singer! I am still waiting for that day but that was the kind of faith, love and affection that bubbled in the heart of my beloved teacher! Since she noticed that I had a great fascination for knowing how her piano produced its different notes she would open it and show me how the keys, strings and foot pedals worked in unison to produce music. She also succeeded in making me learn to play the first few notes of the nursery rhyme, ‘Jack and Jill’ on the piano but try as much as she did she could not make me go up the hill with them! Nevertheless, she continued to be my close friend, consoling and soothing me when I was hurt or upset and always giving my parents a very good report about me at every parent-teacher meeting!

Our love for each other continued beyond my schooling years and I used to visit her very often even as College student. Through these visits her husband Edward Fernandez too became a very close friend of mine and we used to spend hours together at their house in Karunapura chatting late into the nights. He used to work for the railways as a loco-pilot and he was a most interesting story teller who had an inexhaustible collection of ghost stories some of which he would insist were his own personal experiences.  Then came a time when he developed a persistent fever which had all the signs of being tubercular in origin but which failed to respond to anti-tubercular treatment.

One day, while I was a second year medical student, he told me about it when I visited him. That was when I casually remarked that he should ask his treating doctor at the Railway Hospital to test him for Brucellosis as it mimicked Tuberculosis very closely. He did just that and that very humble doctor heeded the suggestion of his patient’s still green-eared medical student friend and found that he was indeed suffering from Brucellosis! With proper treatment he was quickly cured of his ailment much to everyone’s relief. But it was not my great clinical acumen that had done the miracle. It was simply a coincidence that I had just then attended a class on Brucellosis a few days before our meeting! I pray that the kind Lord grants Miss Dorothy, her husband Eddie and their dear son Lloyd whom they lost in a most tragic motorcycle accident, eternal rest in heaven. Amen!

Dr. K. Javeed Nayeem Over a cup of evening tea
Polarised populace
Our leaders must look at the survival of our country