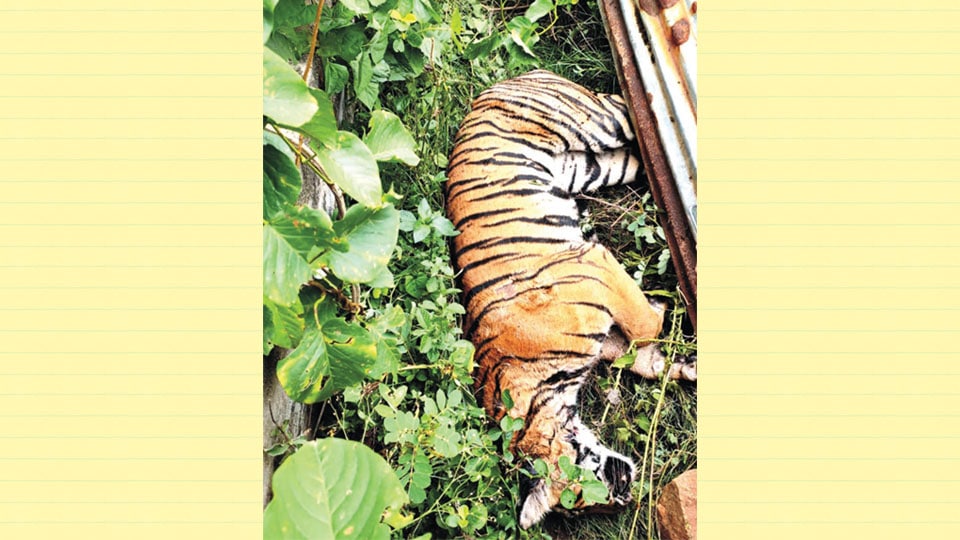 Gundlupet: The sub adult tigress which was found dead yesterday morning at Maguvinahalli village inside Bandipur Tiger Reserve was run over by a goods vehicle. It was earlier suspected that the feline died after a fierce battle with a wild boar. Even the partially eaten body of the boar was found nearby giving credence to the Forest Department theory.

However, a post-mortem examination last evening revealed that the tigress was hit by a speeding vehicle and it had sustained severe internal injuries. Some of its facial bones too have been broken.

The four-year-old tigress was run over by a speeding vehicle while it was crossing the road close to Melukamanahalli Gate. Though there is a ban on night traffic through Bandipur from 9 pm to 6 am, there are no restrictions on vehicle movement outside the National Park.

The carcass was spotted near the compound wall of Jungle Lodges & Resorts (JLR) towards Kallegowdanahalli-Maguvinahalli village road. Forest Department officials said that as it is a village road, vehicles move on that road carrying vegetables, manure and goods.

Reports say that some of the JLR staff heard alarm calls of monkeys around 4.30 am yesterday and they searched for any tiger movement inside the resort. That’s when they found the carcass near a compound wall.

Project Tiger and Director of Bandipur National Park T. Balachandra said that during the post-mortem, the doctors observed facial bone fractures. Foresters have found scraping marks of the tigress’ claws on the road. Further, the feline’s body hair was also found smeared on to the road suggesting that the feline may have been hit by a vehicle moving at high speed.

“The tyre marks on the road suggest that the driver had applied brakes after hitting the animal. The animal might have been dragged a few metres before the vehicle stopped. Blood stains on the road and its side suggests that the passengers in the vehicle, fearing arrest, had dragged the tiger from the middle of the road and dumped it near the compound wall of JLR,” said Department officials.

Dr. D.N. Nagaraju, the veterinarian who conducted the post-mortem, said the tigress may have died of a road accident after 1 am. “It had suffered a muscle tear besides damage to neck bone and the tip of the shoulder bone. The tigress also suffered internal bleeding,” he said.

In the last six months, there have been four tiger deaths in Bandipur, of which two were natural deaths. There have been instances of locals trying to poison tigers to save their cattle. Following the latest incident, forest officials got a sniffer dog to the spot and it went inside a farmland and private resorts near the area but could not trace the vehicle which had hit the tigress.

Officials are now scanning the CCTV visuals to trace the vehicle and are also looking for local garages in surrounding villages to check if any vehicle had a dent on its front body.