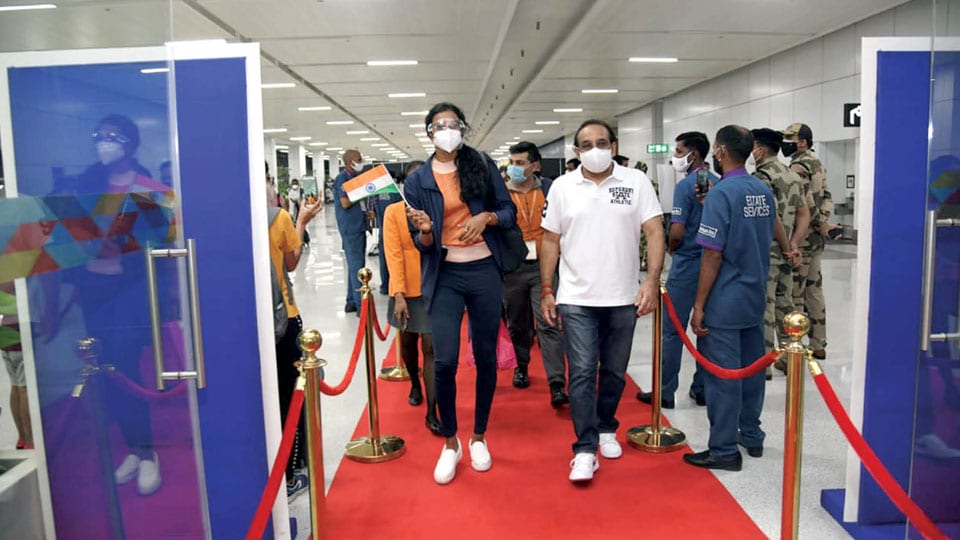 Sports Minister Anurag Thakur on Saturday gave a formal send-off to India’s first batch of the Tokyo Olympic-bound athletes from eight disciplines at the Indira Gandhi International Airport in Delhi.

A contingent of 88 members, which includes 54 athletes besides support staff and IOA representatives, departed for the Japanese capital on Saturday night to participate in the COVID-hit Tokyo Games, which will begin in a week’s time on July 23.

Hockey, consisting of both the men’s and women’s teams, is the largest among all disciplines.

The hockey teams were accorded a warm reception on entering the IGI terminal, with airport staff clapping on both sides as they walked through.

India’s lone weightlifter in fray, Mirabai Chanu, reached Tokyo on Friday from her training base in St. Louis, USA.

The boxers have left from Italy while the shooters reached Tokyo on Saturday, after completing a long training-cum-competition stint in Croatia.

India will be represented by a 228-strong contingent, including 119 athletes, at the Tokyo Olympics, which will be held under strict health protocols and without spectators in the wake of the raging pandemic.

Four Indian sailors — Nethra Kumanan and Vishnu Saravanan (laser class), K.C. Ganapathy and Varun Thakkar (49er class) — were the first from the country to reach Tokyo from their training bases in Europe.

They started training on Thursday. The Indian shooting contingent checked in at the Games Village on Saturday.

Besides, the rowing team has also reached Tokyo, while the boxing contingent has left from its training base in Italy and is scheduled to reach the Japanese capital via Amsterdam on Sunday morning.