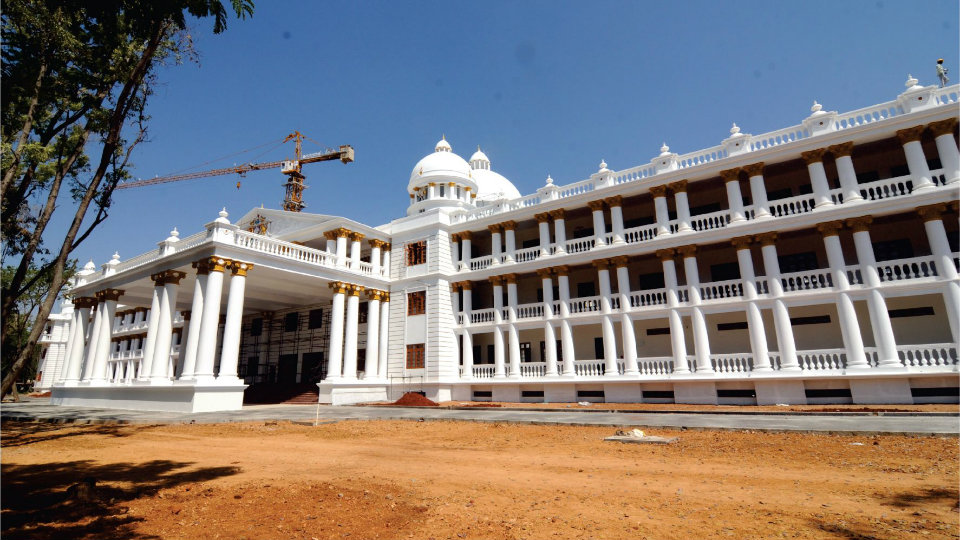 A touch of Lalitha Mahal Palace

Mysuru: The new District Office Complex (Deputy Commissioner’s Office) on the German Press premises has been built on the lines of Lalitha Mahal Palace and the reason behind this is to maintain the heritage character of the city. The building has been constructed on a 15-acre land.

The construction works have been completed by Karnataka Public Works, Ports and Inland Water Transport Department at an estimated cost of around Rs. 70 crore. The project has been implemented by Pune-based Shirke Construction Technologies Limited.

The present Office of the Deputy Commissioner is housed in a 150-year-old heritage building and congested. There is no parking place and except the Deputy Commissioner, all other officials have to park their vehicles outside the Complex. Many District Offices, including Social Welfare and BCM offices, which were functioning at the DC Office Complex, have shifted to private buildings.

Now, only a few offices like the Treasury, the Food and Civil Supplies Department, the Deputy Director of Land Records and the DC’s Office are functioning in the heritage building.

Space for parking vehicles has been earmarked at the basement. Speaking to Star of Mysore, Deputy Commissioner D. Randeep said that in the first stage, 11 offices that are functioning at the present DC office will be shifted. Later, the remaining 28 offices will be shifted.

Along with the construction of the DC Office Complex, road widening works from Mysuru Dairy Circle in Siddarthanagar till Bannur Road Junction have been completed.

Ornamental lamp posts that have been installed on the stretch following international standards have enhanced the aesthetics of the road leading to the imposing Complex.

Asphalting works of the road between Teresian College and Bannur Ring Road Junction too have been completed.

The authorities concerned  said that the total estimate of the road works is Rs. 30 crore. The works have been implemented by Bapuji Constructions.

District Office Complex
This Hospital will be a boon for patients from five districts
CM’s inauguration spree on Mar. 5 and 6