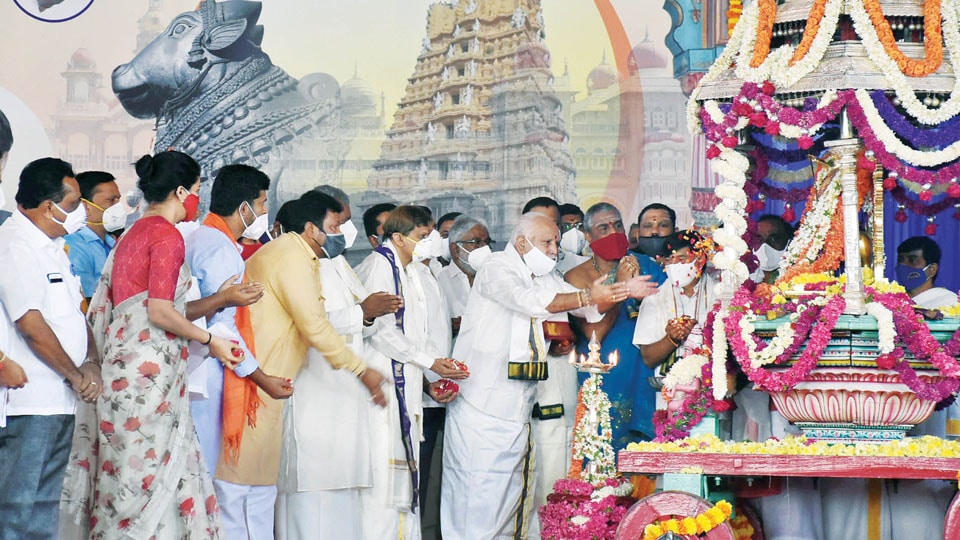 Mysore/Mysuru: After months of COVID-19 pandemic, Mysuru came alive with the opening of Dasara-2020 festivities atop Chamundi Hill today. The city will be bubbling with enthusiasm and gaiety for the next nine-days on account of Navarathri celebrations which is celebrated as Dasara festival here.

Dr. C.N. Manjunath, Director, Sri Jayadeva Institute of Cardiovascular Sciences and Research, Bengaluru, declared open this year’s Dasara festival by offering flowers to the idol of Goddess Chamundeshwari, seated inside the Silver Chariot, amid chanting of hymns by temple priests. The idol of Chamundeshwari was decked up with colourful flowers. The tunes of Nadaswara, a traditional musical instruments troupe, added to the festive mood. This time, the State Government has decided to celebrate Nada Habba in a simple manner in view of spurt in Corona positive cases.

The inauguration was restricted only to 200 persons as per COVID-19 guidelines issued by Government of India. Citizens and tourists were barred from entering the Hill as a precaution.

Speaking after inaugurating the festival, Dr. Manjunath, who was in traditional attire of Silk dhoti, Silk shirt and Silk shalya, paid rich tributes to Wadiyars of Mysore for introducing Dasara festival to this city several centuries ago. Among rulers, Sri Nalwadi Krishnaraja Wadiyar has been known as the ‘Architect of Modern Mysore’ for bringing several people welfare programmes, that too during pre-Independence period. The Mysore Kings never restricted themselves to the Palace but became people’s kings. Their contribution to the fields of health, education, irrigation and agriculture was immense,  he noted.

He urged the State Government to declare those Corona Warriors, who die while on duty, as ‘Martyrs’ since they were fighting against an unknown and unseen enemy.

In a bid to check the pandemic, hundreds of doctors and Corona Warriors have sacrificed their lives. They also deserved all the honours on par with our soldiers on border, he said and added that they should be given certificate of appreciation from the Government.

So far, over 400 doctors have died while treating Corona positive patients. It was their duty to condole their deaths in this war of virus. The Government was doing an excellent job by honouring the Corona Warriors on this occasion and it would boost their energy to work more, he opined.

Dispelling wrong notion about the Coronavirus, Dr. Manjunath said Corona was not a stigma which has created tension around the globe. People should maintain a physical distance from patients but be with them mentally. They needed love, affection and self-confidence to recover, he said.

The Corona patients were not untouchables and a majority of them have recovered with or without medicine. Only a few percentage of patients required oxygen support and one per cent required ventilator support. Corona was like any other virus but it needed basic precautions like wearing face masks, hand hygiene and safe distance, the doctor stated.

Dr. Manjunath bemoaned that the medicine field has become a battleground and doctors were becoming patients. According to some studies, the life expectancy of doctors had decreased by around 10 years and this is attributed to professional, mental and physical pressure.

Responsibility of doctors was to give medicine to patients at the right time and no one will show negligence in treating them. Sometimes, patients die due to failure of treatment and assaulting doctors and ransacking clinics or hospitals was not correct. This was affecting the morale of the medical fraternity. For this reason doctors were not ready to work in villages. They will be able to discharge their duty if the situation was conducive,                     he added.

“Doctors may or may not perform puja at home. But they will begin their work by praying God for treatment to be successful and patients are discharged after recovering fully. They consider gift of health to patients as theirs. One cannot imagine the plight of doctors, nurses and lab technicians in Corona Wards wearing PPE kits and working for long hours. Many of them are working without seeing their families for months together. They live separately to ensure that the pandemic does not spread to their loved ones. In the process, they are losing health. Humanity is like an ocean and this stands first in medical profession”, Dr. Manjunath said.

READ ALSO  Netas Vs Babus: CM directs everyone to work in tandem

As another Corona Warrior P. Kumar, a Police Constable, could not attend the function due to personal reasons, his wife received the honour.

An elaborate security arrange-ment was made at the Hill top by the City Police.

Speaking on the occasion, CM B.S. Yediyurappa said his Government has prayed Goddess Chamundeshwari to banish the deadly virus from the whole world. The pandemic forced them to scale down the celebrations but without diluting its tradition. In the ongoing fight against COVID-19, citizens must join hands with the Government by wearing face masks, hand hygiene and social distancing.

“I am announcing release of Rs. 7.50 crore for repair of 1,000 steps leading to Hilltop and for development of Lakes — Devikere and Hirekere, from where water is collected daily to perform abhisheka for Goddess Chamundeshwari,” he said.