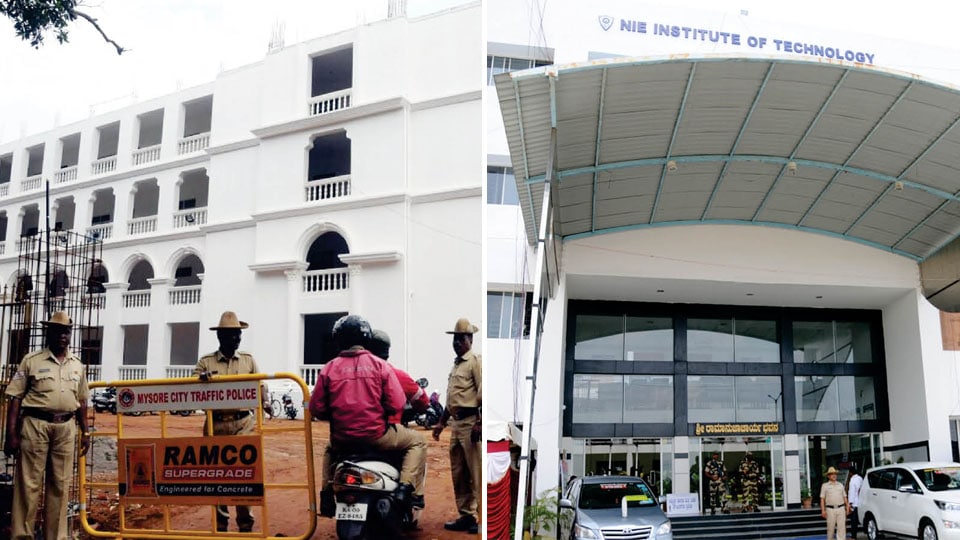 Mysuru:  All types of vehicular movement will be restricted on the roads where the counting centres are located for counting of votes for the 11 Constituencies in the District, said Police Commissioner Dr. A. Subramanyeswara Rao.

The counting of votes will be held tomorrow (May 15) for seven Constituencies at the newly-constructed Maharani’s College of Commerce and Management on Valmiki Road in Vinayakanagar and of the remaining four at NIE-IT in Koorgalli, located on the KRS Road leading from Hunsur Road.

In a press release, Dr. Rao has stated that as there will be a huge rush of public, the supporters of political parties, the counting officials and staff, the vehicle movement has been restricted to maintain peace and order near the counting centres. The order will be in force on May 15 from 6 am to 10 pm.

Maharani’s Counting Centre: In view of the counting to be held at Maharani’s Commerce and Management College on Valmiki Road, all types of traffic have been banned from Vinayakanagar (Paduvarahalli) Road traffic signal junction to the Kalamandira Traffic junction on both sides of the Road.

On Valmiki Road, all types of vehicular movement has been restricted from Hunsur Road junction to Kalidasa Road junction and vice-versa.

However, the vehicles of election officials, political parties’ agents, counting officials and the media are allowed to move on these roads.

How to reach Counting Centres: Media representatives, candidates who have contested in the election, agents, counting officials and staff must take a turn at the KRS Road-Valmiki Road-Adipampa Road junction to the right, go on Adi Pampa Road and take a left turn at Narayanaswamy Block and park their vehicles at the ground behind Mahadeshwara Temple and walk up to the counting centre in Maharani’s College.

Arrangements have been made for the public to park their vehicles on either side of Swami Vivekananda Statue on Adi Pampa Road and Valmiki Road junction, on either side of the road at the Akashvani Circle, on the road to the west of Kalidasa Road junction and in Manasagangothri campus, Kalamandira premises and Kukkarahalli Lake west side.

Similarly, the movement of all types of vehicles on Mysuru-Hunsur Road towards KRS Road’s KIADB High Tension Double Road up to BEML Police checkpost near Bastipura, have been banned. However, the media representatives, candidates who have contested in the election, agents, counting officials and staff have been exempted from this ban.

Vehicle parking: The media representatives, candidates who have contested in the election, agents, counting officials and staff can park their vehicles at the playground in NIE-IT.

The public are allowed to park their two-wheelers and Light Motor Vehicles at BEML’s Parade Grounds. Also the public coming from Bastipura side can park their vehicles at the grounds near the Police checkpost.