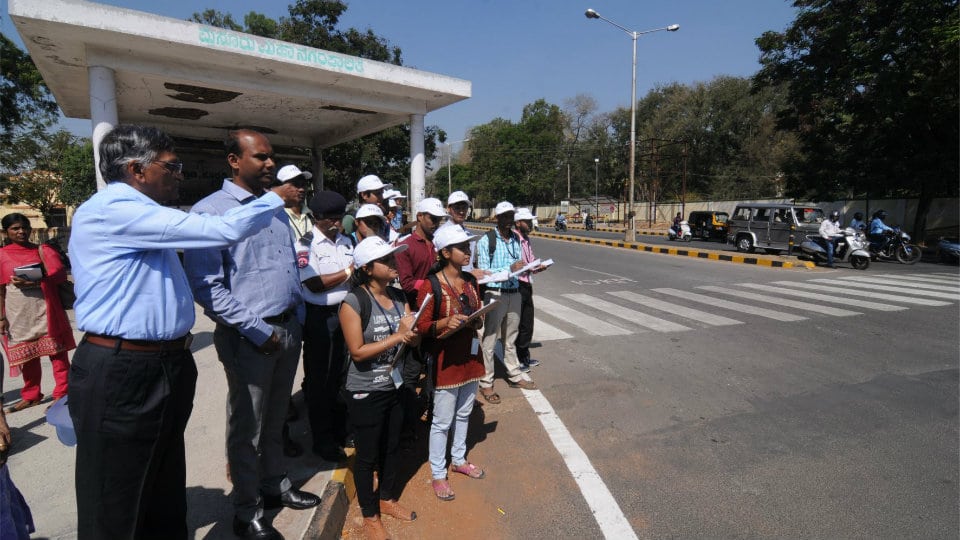 The survey is being anchored by MGP Member R. Chandra Prakash and as part of the study, nearly 50 volunteers from V-LEAD, St. Philomena’s Post-Graduate Institute and Traffic Wardens, began the traffic survey at 7 am at K.R. Circle, Nehru Circle, Devaraj Market, K.R. Hospital premises where they studied the movement of the vehicles and whether there is enough place for parking.

The study today also involved where the shoppers would park their vehicles to shop in Devaraj Market. It ended at 9.30 am and later, the volunteers moved to Ramaswamy Circle to study the vehicular movement there till 11 am.

Deputy Commissioner D. Randeep, who visited Ramaswamy Circle and interacted with the researchers, told Star of Mysore that the MGP had initiated this study to see how the impact of traffic movement will be in the next 20 years and how the city can be made to accommodate the growing volume of vehicles.

He said that the District Administration had deputed nine Nodal Officers to work with the NGO and the Traffic Police were also assisting them. “Initially, we had told the MGP that we could not fund the project, but now under CSR we have given them a grant of Rs.2 lakh for the study,” he said. The study is being conducted with the cooperation of the District Administration, Police and Government agencies like KSRTC, MUDA, RTO and others, the DC said.

The study will be completed and a comprehensive report will be submitted to the District Administration by July this year. The report will suggest how to control traffic and implement other measures to see that the whole traffic system is streamlined, said Randeep.