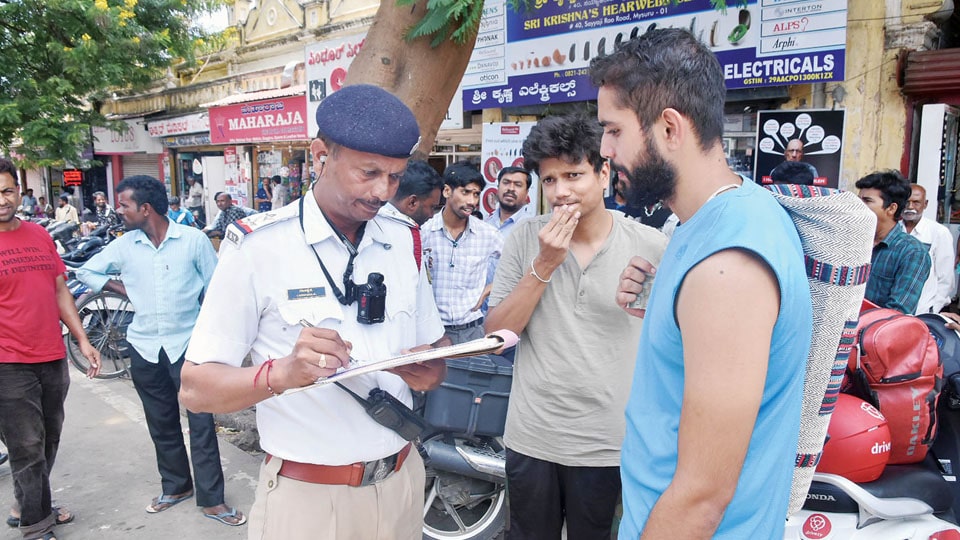 Mysuru:  As announced yesterday, the City Police this morning started the implementation of hefty traffic fines on violators as stipulated in the Motor Vehicles (Amendment) Act 2019. Several offenders were caught off guard in busy junctions where Policemen lay in wait to catch offenders.

The drive began across the city at around 11.15 am and it was only Inspectors who implemented the rules and collected fines. As the Police are yet to calibrate hand-held machines to the revised fines, manual challans were issued today. For compoundable offences, the fines will be collected by Traffic Police and the Court will decide on non-compoundable offences.

In the absence of Inspector Sooraj, who is attending a Court matter, Sub-Inspector Lepaksha of Devaraja Traffic Division booked offenders near the junction of Sayyaji Rao Road and Devaraja Market Gate.

Within a few minutes, he booked 9 cases for not wearing seat belt, helmet-less riding, pillion rider not wearing a helmet, auto drivers not wearing uniform and lack of number plate.

Each checking point has two to three Policemen who are stopping vehicles and booking the violators. Also, Police were seen wearing body-worn cameras to record traffic violations. The body-worn cameras record the voice and video to prevent Policemen from indulging in corruption and also to identify the Police and public in case of assaults.

A majority of common violations caught this morning were helmet-less riding, signal jumping, using mobile phones while driving or riding, not wearing seat belts in four-wheelers and driving without insurance. On an average, 15 to 20 cases were booked till afternoon today by each traffic division. Apart from issuing spot fines at major junctions, motorists who violate traffic rules will also receive challans at their address if they are caught violating the rules in CCTV cameras placed at traffic junctions.

Meanwhile, ever since the implementation of the amended Indian Motor Vehicles (IMV)Act came into force, questions were raised on whether only hard copies of documents will be accepted by the traffic Police. To clear the same, the Ministry of Road Transport and Highways (MoRTH) has clarified that e-copies of all the documents will be accepted by the Police and there is no compulsion to carry hard copies of documents all the time.

“It is hereby clarified that the Ministry of Road Transport and Highways (MoRTH) has issued an advisory to States to accept driving licence, registration certificate or other documents in ‘electronic form’ presented through DigiLocker or mParivahan platform as valid under the Motor Vehicle Act 1988 and treat them at par with the certificates issued by the transport authorities,” the Ministry clarified.

Police officers said they will accept all documents in hard copies as well as soft copies/electronic format. “We will accept e-copies as long as they are in the DigiLocker or the mParivahan Apps but not photos, scanned copies or screenshots of these documents shown on the phone. If it is a White Board vehicle, one does not need to carry the hard copies all the time. But for ‘Yellow Board’ vehicles, carrying hard copies are a must,” a Police Officer said.