Home » News » Beware! You will be photographed while violating traffic rules 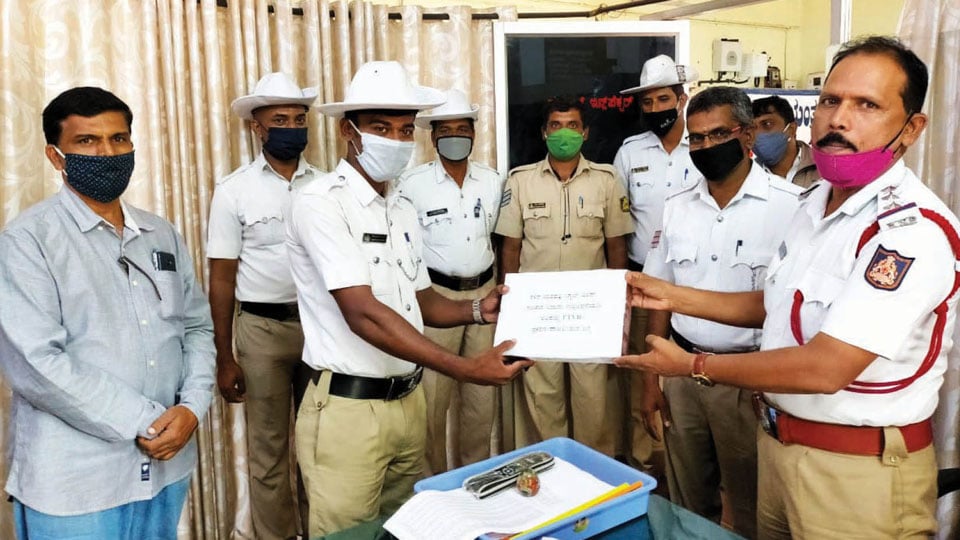 Beware! You will be photographed while violating traffic rules

Mysore/Mysuru: Those indulging in various traffic rules violations such as jumping signals, triple riding and faulty registration plates among other violations and thinking that they can get away without being noticed, should now think twice as Traffic Police personnel will be clicking photos of such traffic rules violations by errant motorists and uploading the same to the Police Department server.

Devaraja Traffic Police have begun the drive since last week and notices are being served to the errant motorists.

Most of the areas in the heart of the city including K.R. Circle, where the density of traffic is more, come under Devaraja Traffic Police. Traffic rules violations are also more in these parts of city resulting in accidents, sometimes fatal. Hence, the Traffic Police are now using their smart-phones to click photos of traffic violations and uploading the same to the Police Department’s server.

Also to encourage Cops on traffic duty to conduct this photo clicking drive effectively, Devaraja Inspector Muniyappa has come forward to award prizes weekly once to the Police Constables who click highest number of traffic violation photos in that particular week. Last week, Traffic Constable Vidyasagar had clicked more than 150 traffic violation photos at K.R. Circle and Inspector Muniyappa handed over the prize, which is meant for clicking highest number of photos, at the Police Station yesterday. Also, awards were given to Traffic Policemen Chatrapati and Gurumallappa for their efficient work.

READ ALSO  ‘KR Circle to have traffic-free corridor for ambulances’

Inspector Muniyappa, speaking to Star of Mysore, said that one small traffic rule violation at a place where the density of traffic is high, would lead to accidents involving innocent motorists and added that more number of accidents take place due to signal jumping. To control such violations, the Traffic Police personnel are now given permission to use their own mobile phones to click the photos of traffic violations, the Inspector added.

Once the traffic rules violation photos are uploaded to the Police Control Room Server at City Police Commissioner’s Office, notices would be sent to the address of the violators, asking them to pay the fines for committing the traffic violations, Muniyappa said.

He further said that following the complete lockdown yesterday, their entire jurisdiction had come to a standstill and added that except for vehicles of the Health Department and vehicles carrying essential commodities, the public stayed indoors and extended their co-operation as the fear of contracting COVID-19 has engulfed them.

The city could be made COVID-free only with the co-operation from the public, he added.