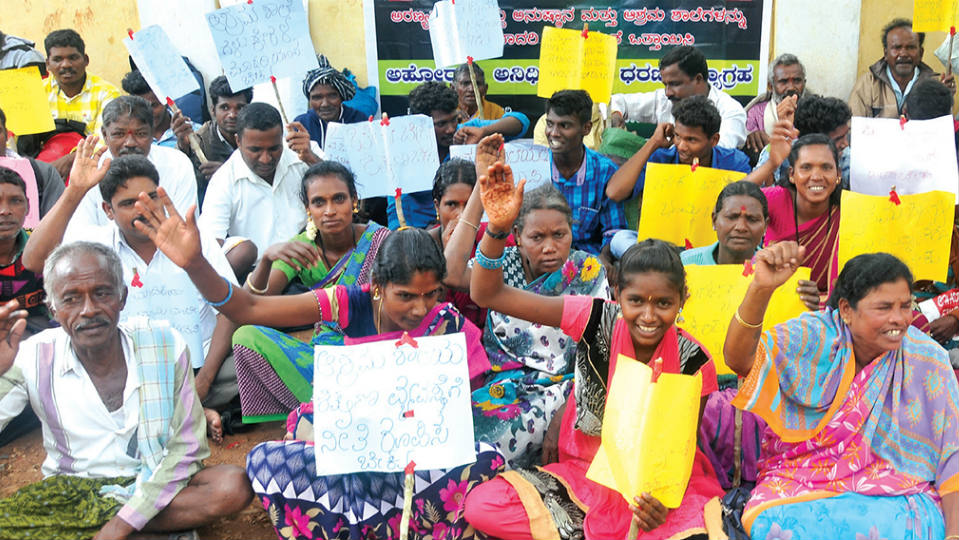 Mysuru: Tribals from more than 10 hamlets in the district launched an indefinite stir near the Deputy Commissioner’s office here yesterday, demanding implementation of the Forest Right Act 2006 and Kerala model education in Ashrama schools.

More than 50 people from different hamlets in H.D. Kote, Hunsur and Periyapatna taluks in Mysuru and various taluks of Kodagu district, under the banner of Karnataka Aranya Moola Budakattu Samudayagala Okkutta, launched the protest.

They alleged that the quality of education is sub-standard in Ashrama Schools and demanded introduction of Kerala model education in the schools.

The protesters complained that thousands of tribal people have been vacated from Bandipur National Park and Tiger Reserve, and Nagarahole National Park. “Tribals have since been on the streets struggling for food. The Government has sent out tribals from the forests under the guise of forest and wildlife conservation and has not rehabilitated them,” they alleged. “Many tribal people are working in coffee plantations without proper facilities. Though the Forest Rights Act was passed in 2006, the Government has failed to implement it and has failed to sanction lands as promised,” they said.