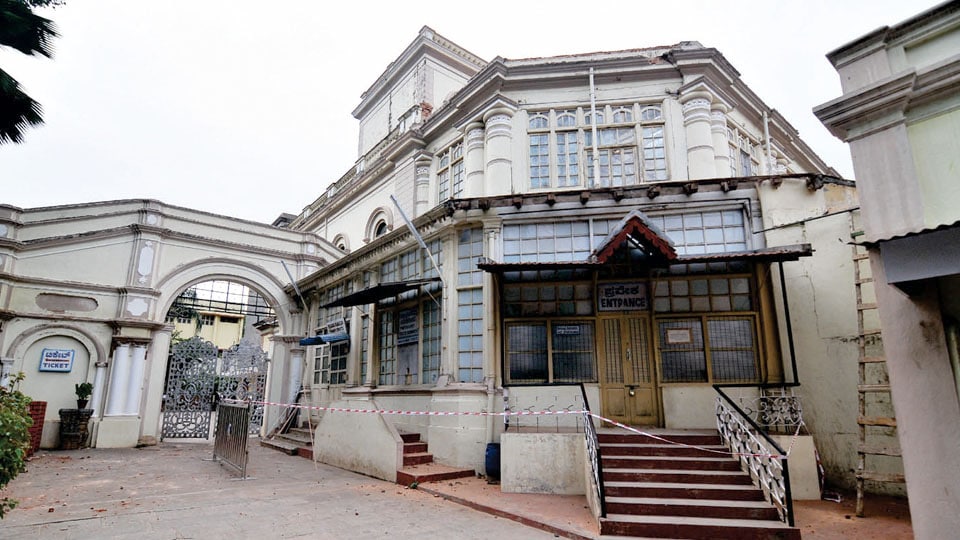 The historic Jaganmohan Palace, built in 1861 by Mummadi Krishnaraja Wadiyar, in the heart of the city that was almost dilapidated because of poor upkeep, is quietly springing back to its past glory. As an Art Gallery, Mysureans take great pride in showcasing it to the visitors, as it houses some of the most famous paintings by Raja Ravi Varma. It also boasts of exhibiting some of the most unique and rare objects in the form of items of interest such as musical calendar clocks, paintings, musical instruments and intricate carvings.

What ails the Art Gallery? is the question that everyone who visits it is forced to ask. Is there any solution to the deteriorating Museum? Only one person knows the answer —  Pramoda Devi Wadiyar, wife of late Srikanta Datta Narasimharaja Wadiyar.

“It has deteriorated because of lack of regular maintenance. Also one must remember that it is an old building and it has its own problems,” said Pramoda Devi, speaking to Star of Mysore. 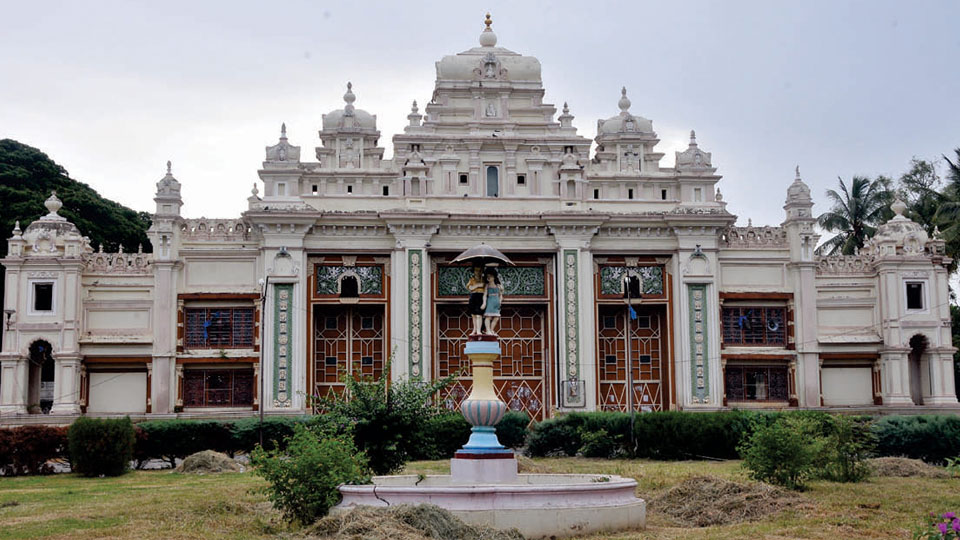 The front view of the 156-year-old Jaganmohan Palace.

History of the Palace

Dwelling into the history of the Palace, Pramoda Devi said, “The Jaganmohan Palace was used as a residential Palace after the wooden Palace (where the magnificent Amba Vilas Palace stands now) caught fire and burnt during a marriage function and a new Palace was under construction. During this period the royal family conducted all religious and social functions in the Jaganmohan Palace.”

According to Pramoda Devi, the present auditorium (where public functions are held) was exclusively built as marriage pendal for the wedding of His Highness late Maharaja Sri Nalwadi Krishnaraja Wadiyar in 1900.  This was subsequently  used for various activities such as Legislative Assembly and Council meeting, convocation of Mysore University and also for conducting weddings of royal family members and many historical events. The auditorium was used for private cinema shows to run 35 mm cinema and to host other cultural programmes, while the old residential portion of the building housed an Art Gallery.

“I started the restoration work in February-March this year. I am doing it section by section, part by part. The artefacts housed in the Art Gallery which are priceless have to be carefully preserved as one cannot reproduce that kind of work. The work could have been expedited but it is getting delayed due to untimely rains and non-availability of sand. I also plan to improve the Jaganmohan Palace auditorium to the full potential of the property. I have to make it a revenue generating place to meet the cost of maintenance of the auditorium. I hope to complete the work in another six months.” – Pramoda Devi Wadiyar

The last Maharaja of Mysore, Sri Jayachamaraja Wadiyar founded Sri Jayachamarajendra Art Gallery Trust and entrusted the management of the Art Gallery to the Trust.  Later, under the Chairmanship of his wife Tripurasundarammanniavaru the  decision was taken  to renovate this auditorium  to be used  for various activities.

It was in 2012 that Srikanta Datta Narasimharaja Wadiyar, the then Chairperson of the Trust,  took a decision to turn it around. “As we were just getting ready to take up the renovation work, tragedy struck, as my husband suddenly passed away in December 2013. The responsibility fell on my shoulders. I decided that I will repair it at my personal cost,” said Pramoda Devi. 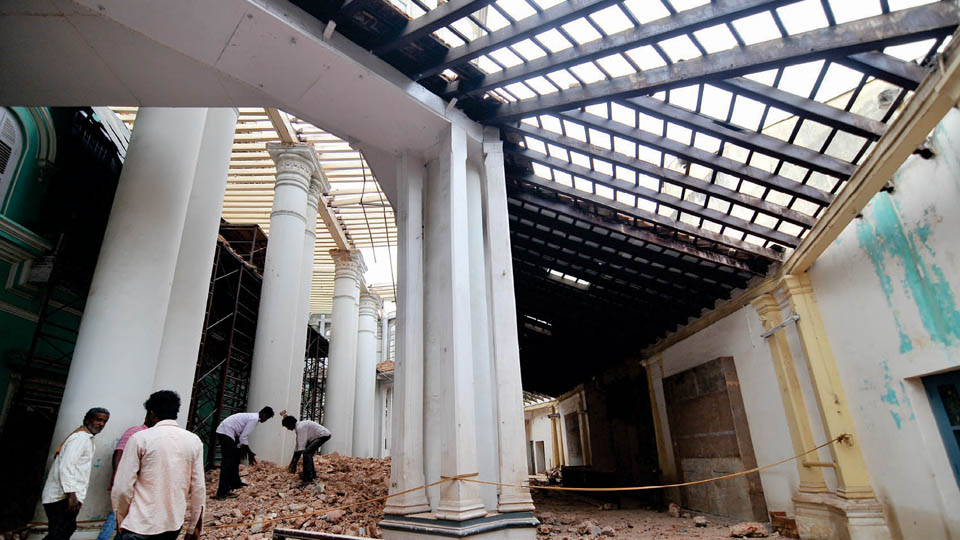 Restoration work of the Jaganmohan Palace Art Gallery under progress.

The roof of the main hall of the building, which is the entrance to the Art Gallery has given way and it needs to be repaired. The alteration work is going on at a brisk pace. “I started the restoration work in February-March of this year. I am doing it section by section, part by part. The artefacts housed in the Gallery which are priceless have to be carefully preserved as one cannot reproduce that kind of work,” said Pramoda Devi.

The repair work is also going on in the Ganesha Hall, the rear portion of the Art Gallery, where it is being strengthened by adding additional corinthian pillars which once completed will look very regal and arresting. The ivory and sandalwood carvings that were housed here have been kept in a storehouse.

The work could have been expedited but it is getting delayed due to untimely rains and non-availability of sand, she said. 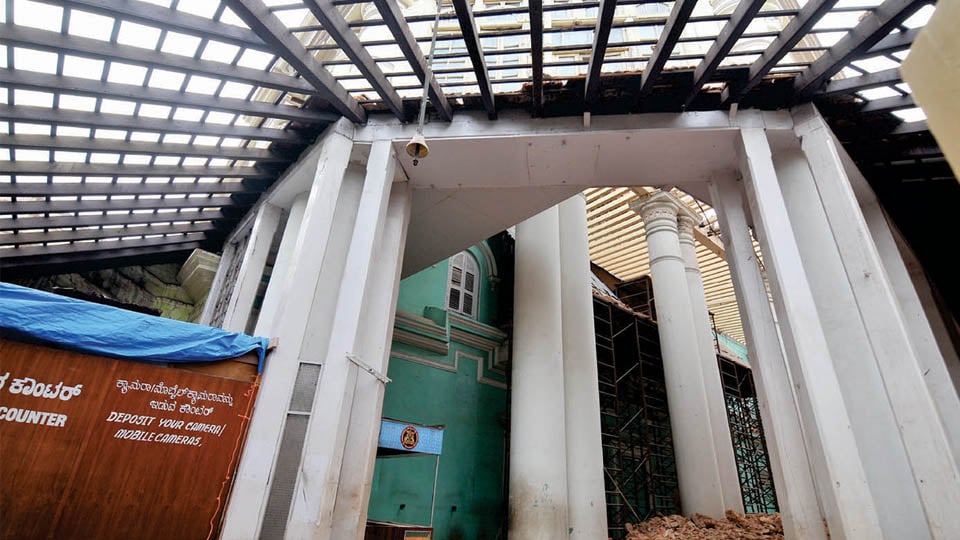 The repair works going on in the Ganesha Hall.

The wooden beams which is the hallmark of the heritage structures have been preserved even as the roof has been brought down.

“I also plan to improve the auditorium. It will be developed to the full potential of the property. I have to make it a revenue generating place to meet the cost of maintenance of the auditorium,” she said and added, “I plan to complete the work in another six months.”

Meanwhile, there is a “Glow of Hope,” as Jaganmohan Palace continues to welcome visitors, albeit with a little less display.