Venkatapura, a village in Nangli, Mulbagal Taluk of Kolar district, used to be a part of the Hoysala Kingdom. What is the connection between this small village and the Hoysalas? A very curious connection. In this village is coming up Lord Venkateshwara temple at a cost of Rs. 300 crore, styled on the lines of Hoysala architecture known for its innovative, ornate craftsmanship as well as the influences drawn from both North and South Indian temple architecture.

The scion of the Mysore royal family Yaduveer Krishnadatta Chamaraja Wadiyar consecrated the Upapitha (with the Gaja/elephant tala) on June 14. Who are the prime movers behind this massive temple project?

It is the Shree Kalyana Venkateshwara Hoysala Art Foundation; the President of the Foundation is Ramalinga Reddy. But it is his son Aravind Reddy (Secretary),  B.Sc in Electronics but whose passion was painting, who is driving this dream.

Speaking to Star of Mysore over phone from Bengaluru, Aravind said, “It was my father’s dream to build the Venkateshwara temple. He had retired from the Education department as an Assistant Director. I used to do Mysore-style traditional paintings. When you are painting, loneliness sets in. I wanted to do something different. Our family is involved in temple construction. One of my uncles built the Suryanarayana temple in Bengaluru. We are the third generation of people involved in building temples.”

Why the Hoysala architecture? “Because that type of architecture stopped nearly 800 years ago. We wanted to bring it back to light. The Government has not taken any initiative. The thought came to me that we should do something. We started the construction of the temple in 2007-08 as a small project and our budget was between Rs. 15 lakh to Rs. 20 lakh,” he said and added, “suddenly the whole Reddy community got together and slowly the project grew and we were ready for a Rs. 25 crore to Rs. 30 crore one.” 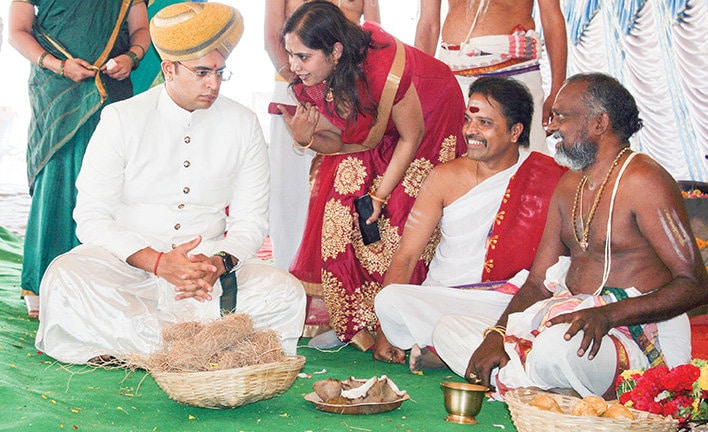 It was at this time that Aravind met Yashaswini Sharma. “I was doing my M.Phil and researching on the Hoysala temple. It was very challenging and a lot of research and development, including the studying of Shastras were going on. A person, who was watching all this came to me and said, ‘I have a friend who wants to build a small temple and he introduced me to Aravind,” said Yashaswini, whose firm Esthique Architects is collaborating on the project, speaking to Star of Mysore.

It was Yashaswini who introduced Aravind to Adam Hardy, Professor of Asian Architecture at the Welsh School of Architecture, Cardiff University. “Adam’s Ph.D was on Hoysala architecture. We met in Delhi in 2009. When I told him that we could spend Rs. 25 crore to Rs. 30 crore, he said why don’t you really think big. There are the three famous temples in Belur, Halebid and Somanathpur. There are also 60  temples in Karnataka with Hoysala style of architecture. I can combine the uniqueness of each one of them and give you a beautiful design,” said Aravind.

It was then that Aravind visited the Akshardham temple in Delhi and was inspired by it. “I decided then and there that we should also build something along those lines. There were two other temples that inspired me. One was the Golden Temple in Vellore, where a Swamiji younger than me had built it a cost of Rs. 600 crore and the other was the Kaalabhyreshwara temple in Adichunchanagiri,” he said. 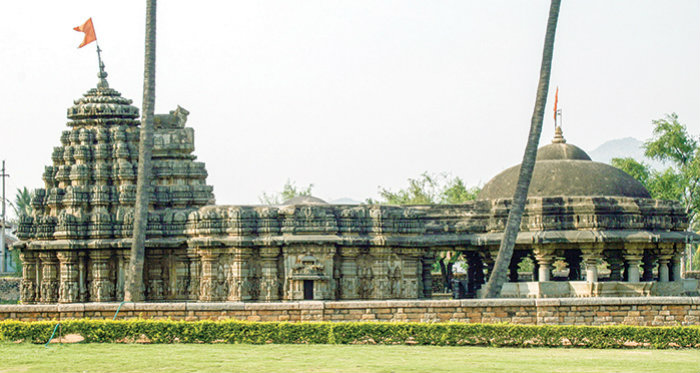 The Arsikere temple that has Hoysala-style architecture

The site of the temple is on an elevated property which is a rocky plateau. The foundation work started in 2012. “Aravind was also profoundly influenced by the design of the Chennakeshava temple at Belur. While these examples set a few requirements, the design of the temple remains an original one, continuing in the Hoysala tradition and will be built using granite and soapstone, employing traditional building techniques, and will be dedicated to the deity, Shree Kalyana Venkateshwara. Adam Hardy, keeping to the client’s brief, “explored variations and permutations of stellate plan geometry among the most ingenious ‘snowflake-like’ Hoysala plans, and invented some new permutations,” said Yashaswini.

The granite stones will be sourced from Karkala in Udupi district and the soapstone from the quarries in HD Kote, she said and added that some of the granite is also sourced from the site of the construction of the temple, near the rocky outcrop for the foundation. 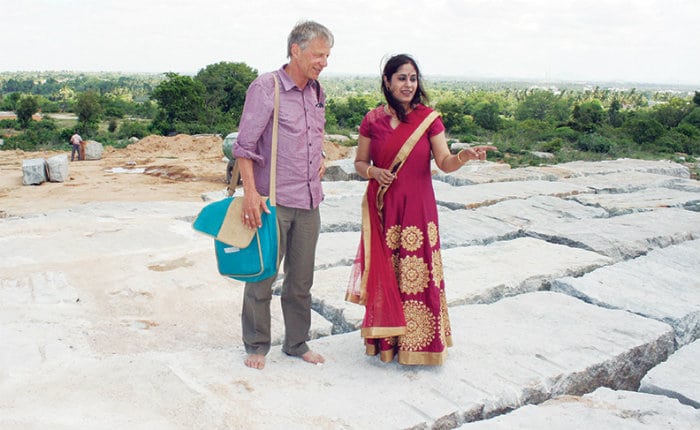 Asked how they plan to raise Rs. 300 crore, Aravind said, “We plan to go public. However, what we have already done is approached our own community people. We need 7,000 blocks of stones and each stone costs Rs 15,000. Already 1,000 of our members has donated for 1,000 stones. The remaining money will also be donated by them.”

READ ALSO  “Like any other Indian, I thought AIDS will never come to India” - 2

But what about collection from the public? “We have come up with a plan. We will go to every 330 villages in Kolar district. We will ask for a donation of Rs. 108. B.K.S. Verma, a well-known artist has painted the Srinivasa-Padmvathi Kalyana on the cards. We will present the card to each person who donates Rs. 108. We also plan to use social media for collecting donations,” said Aravind. 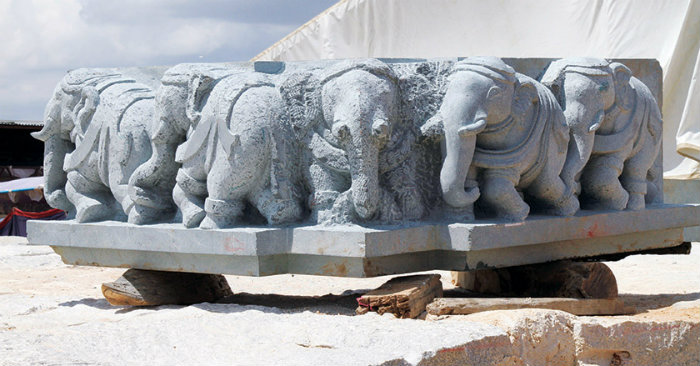 A project of this size requires real good sculptors. Are there any Amara Shilpi Jakkanacharis? “Ashok Guidgar, a sculptor from Bidadi is part of the project. There are many others whom we are identifying all over the country. A few of the sculptors are still there in Puri, Jagannath, who follow the Gurukul system and the traditional methods. They are not after money. We have traced them,” he said.

Each foundation stone is 3ft X 3ft X 9ft. The temple is set in a prakara of roughly 450 ft x 650 ft. The Aya calculations by Agama experts yielded an underlying square of the vimana walls of about 42 ft which in turn generated the geometry for the plan of the temple. The width of the garbha-griha excluding the bhadra projections stands at about 60 ft.  The rangamantapa is also designed to be uniquely stellate. Together, the vimana and jagati measure about 109 ft, said Yashaswini.

“Shankar Stapati who sculpted Vikasa Soudha is the one leading the top-end team of sculptors. Master sculptors such as G.D. Bhat are also a part of the project. Dr Vishnu Bhattacharya, Agama advisor to Tirupati temple is also advising Aravind Reddy. Hardy, Yashaswini and myself had met the then Chief Minister Yeddyurappa and briefed him about the temple,” said Arvind. 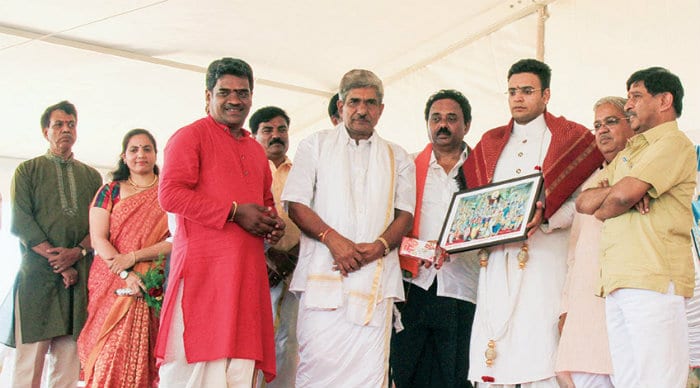 How long it will take for the temple to be completed? “The Hoysala style, as I told you takes years to work on because of its fine, minute, delicate detailing. It will take anywhere between 15 to 20 years to complete the dream project,” he said.

Once the Venkateshwara temple is completed in Venkatapura, it will be one of the most arresting, eye-catching temples, bringing back the glorious Hoysala architecture in all its grandeur. There will be regular poojas performed at the temple, said Aravind.

“We were so happy that the Maharaja Yaduveer came andconsecrated the temple,” said Aravind and Yashaswini.  Yaduveer’s biological parents Swaroop Gopalaraj Urs and Leela Tripurasundari Devi were also present at the consecration. 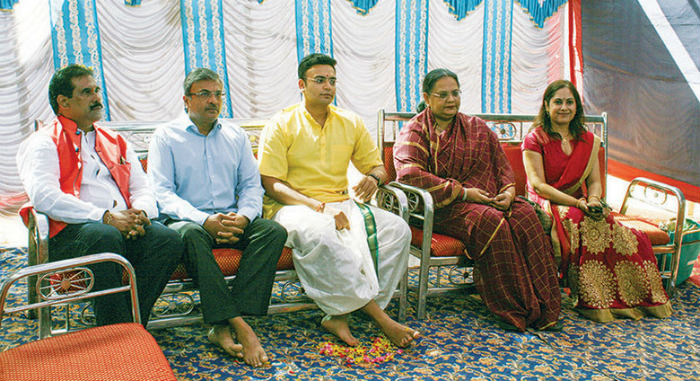