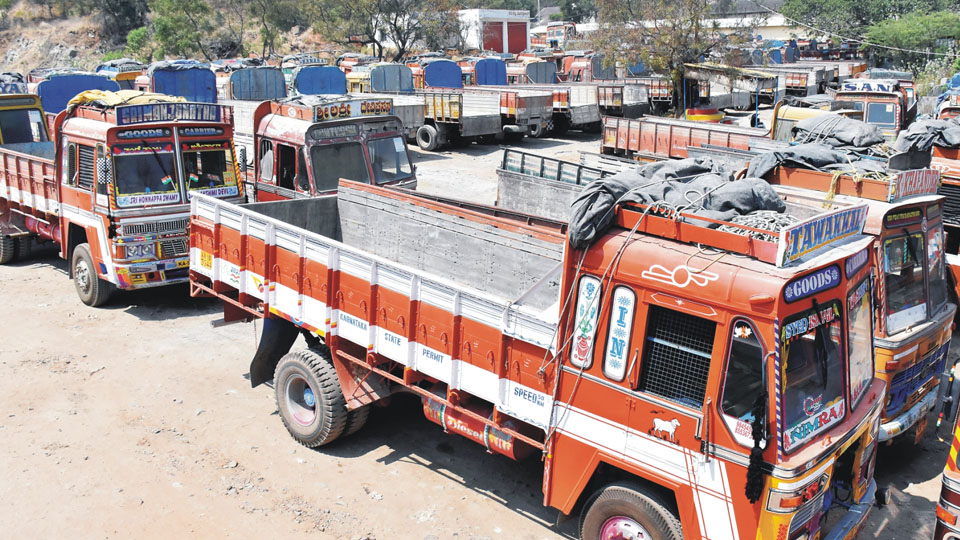 Mysore/Mysuru: Goods transport in the city and district came to a standstill today following a Nationwide Truckers’ Stir in protest against rising fuel prices and seeking fulfilment of their various other demands.

Transporters and lorry owners of Karnataka had announced their support to the one-day stir called by several National-level Trucker and Goods Transport Associations.

As part of the stir, the lorry owners staged a symbolic demonstration in front of the Deputy Commissioner’s (DC) Office here this morning.

There are about 6,500 lorries in the District, with 1,000 of them having National Permit, 1,500 Intra-State lorries, 1,500 lorries concerning construction industry and the rest local lorries, transporting food grains, essential commodities and other articles and goods.

Kodandaram claimed that the truckers were facing a lot of hardship due to operational losses caused by rising fuel prices, spare parts and other factors.

Kodandaram further said that, lorries and other goods vehicles transporting essential commodities have been exempted from the day-long strike.

Strongly opposing the  old vehicle scrapping policy  recently announced by the Government, Kodandaram wanted the Government to clarify on the alternative measures  or proposals for vehicle owners if all vehicles, including trucks, that are more than 15-years-old are scrapped.