Home » News » Believe It or Not ! DC Rohini Sindhuri, I presume? 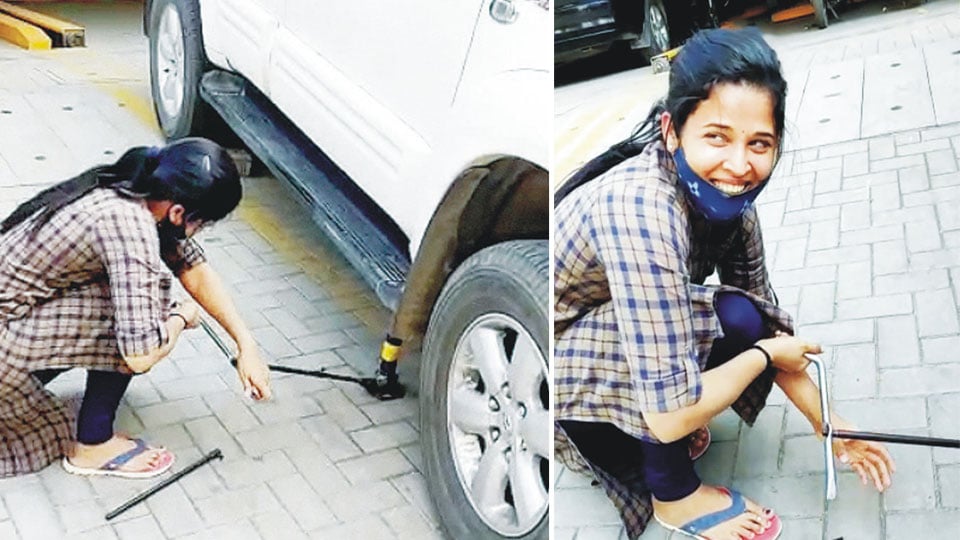 Believe It or Not ! DC Rohini Sindhuri, I presume?

Mysore/Mysuru: A video of Mysuru Deputy Commissioner (DC) Rohini Sindhuri operating a jack with a spanner to replace a punctured SUV tyre has gone viral on social media this morning. However, it is not known where this video has been shot. But it looks like a parking lot of a mall.

The DC, attired in a casual chudidar, presumably might have been on an outing on a holiday. While she was busy operating the jack to lift the white Scorpio SUV to replace the flat tyre, a person comes and asks: ‘Madam, are you DC Rohini Sindhuri?’

Initially, she does not respond. But, after the person repeatedly addresses her as ‘Madam, are you putting puncture?’ she turns towards the person and smiles with her face covered with the mask.

It has been a common practice of almost all IAS Officers to use Government vehicle driven by official driver on public holidays. In case of flat tyre, they will get alternate vehicle and ask the driver to bring it back after fixing the problem. But in case of Rohini Sindhuri, she has replaced the flat tyre without seeking the help of anyone. She could have left the SUV in the parking lot and got another vehicle through her staff but she did not do so.

Motorists know that it is not that easy to replace a flat tyre. It is tiresome to lift the vehicle with the jack, remove the wheel nuts  and replace a new tyre. Believe It or Not ! our DC Rohini Sindhuri  has done it ! When SOM sought her reaction, she said ‘No comments on that.’

3 COMMENTS ON THIS POST To “Believe It or Not ! DC Rohini Sindhuri, I presume?”