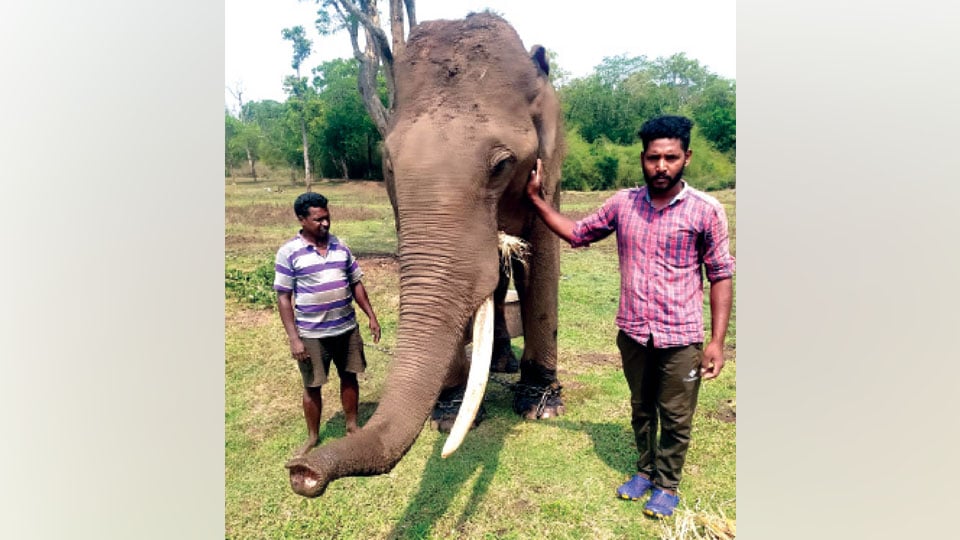 Kushalnagar: It’s been more than a month after Karnataka Forest Minister Aravind Limbavali ordered the release of wild tusker Kusha from Dubare Elephant Camp in Kodagu following the intervention of animal rights activist and former Union Minister Maneka Sanjay Gandhi. But Kusha is yet to walk free and at present, he is spending his time in Dubare camp.

Kusha, the 27-year-old male elephant that went missing from Dubare Elephant Camp one-and-a-half years ago in search of a mate, was captured and put in a Kraal at Dubare. He was then re-tamed and animal rights activists and People For Animals (PFA), Mysuru Chapter, had launched a campaign that had drawn Maneka Gandhi’s attention.

Following her discussion with Aravind Limbavali in the last week of April, the Minister took up the issue with Principal Chief Conservator of Forests (PCCF) Sanjay Mohan, who is also the Head of Forest Force, PCCF (Wildlife) Vijaykumar Gogi and wildlife curators. It was decided to free Kusha after radio-collaring it.

But till now, the tusker has not been released though its recapture and separation from its mate raised many ethical questions.

Irked by this, Maneka has written to PFA’s Savitha Nagabhushan taking objection to the Forest Department’s attitude in not releasing Kusha.

“It is surprising the Chief Wildlife Warden and the PCCF refuse to obey the orders of their own Minister. It has been two months since he ordered the release of the elephant Kusha in Dubare and yet they refuse to release the jumbo. I have spoken to them several times and each time they have given some excuse — like they are looking for herds, it is COVID time, they are very busy, the elephant needs training, the farmers might object,” Maneka wrote.

“Basically, it is simply a question of their egos. They want to keep this poor harmless animal in chains for no reason except to show the Minister who is the authority. It is shameful to have officers who make fun of their own Minister’s orders and flout them openly,” she added.

Orders not issued yet

Speaking on the issue, Kodagu Deputy Conservator of Forests (DCF) S. Prabhakaran told Star of Mysore that no order has been issued on Kusha’s release  as of now.

“They have decided to release Kusha after radio-collaring but we have not received any written orders. Once the orders are received, there are certain procedures to be followed. We are ready to release the tusker and suitable action will be taken in the due course,” he said. Deputy Range Forest Officer (DRFO) Ranjan said that Kusha is in the camp and the procedures to

maintain all captive elephants are followed in his case too. “He is happy and is eating and mingling with the other elephants. Now since there is COVID pandemic, we are taking extra precautions in the elephant camp. The elephant release is a detailed process and can be taken up only after the contagion subsides,” Ranjan explained.

But sources told this correspondent that before releasing Kusha, they have to find a range for him and also a herd. A team has to be deputed for this purpose and he cannot be released just in the middle of the forests. “Also, since Kusha has to be radio-collared, the specialist team — Wildlife Institute of India — has to be informed and they are unlikely to travel to Dubare just to radio-collar one tusker,” the source said.