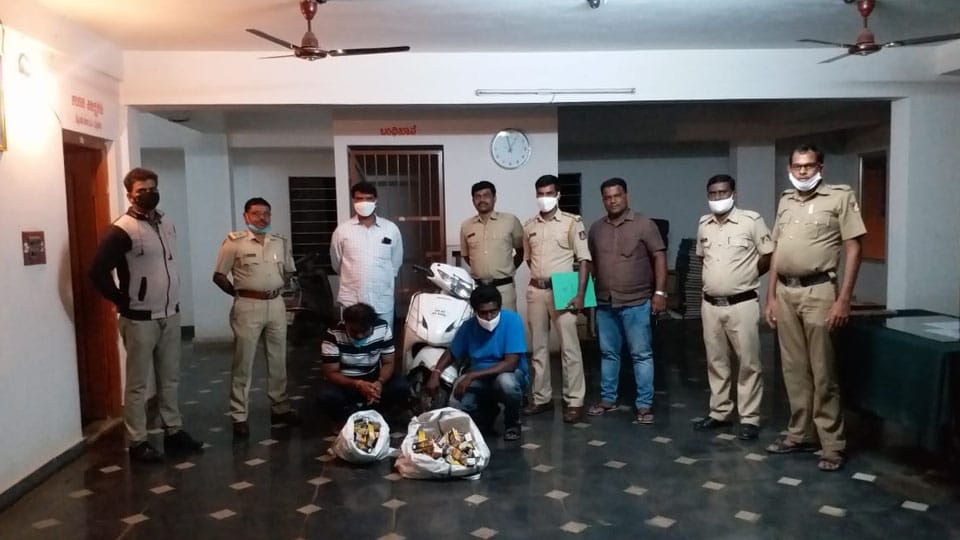 Two arrested for illegal transportation and sale of liquor

Mysore/Mysuru: In separate cases, the Excise Department officials have arrested two persons on charges of transporting liquor and selling the same illegally and have seized 16,800 litres liquor and a two-wheeler from them.

Those arrested are 40-year-old Satish Kumar and 45-year-old Kumar. The accused were arrested on Saturday night at Vijayanagar 4th Stage.

In the first case, accused Shivakumar was nabbed when he was illegally transporting liquor on a two-wheeler on the Ring Road in Vijayanagar 4th Stage and seized the liquor and the vehicle.

In the second case, the Excise officials, acting on a tip off that liquor was illegally stored in a house at Vijayanagar 4th Stage to be sold later, raided the house and arrested Kumar besides seizing liquor bottles stored in the house.

The Excise Department officials have conducted a total of 885 raids on those manufacturing liquor, transporting and selling them illegally from Apr. 23 to 26 in the district.

A total of 14 cases have been booked and 14 accused arrested, according to Excise Department Deputy Commissioner M.S. Murali in a press release.