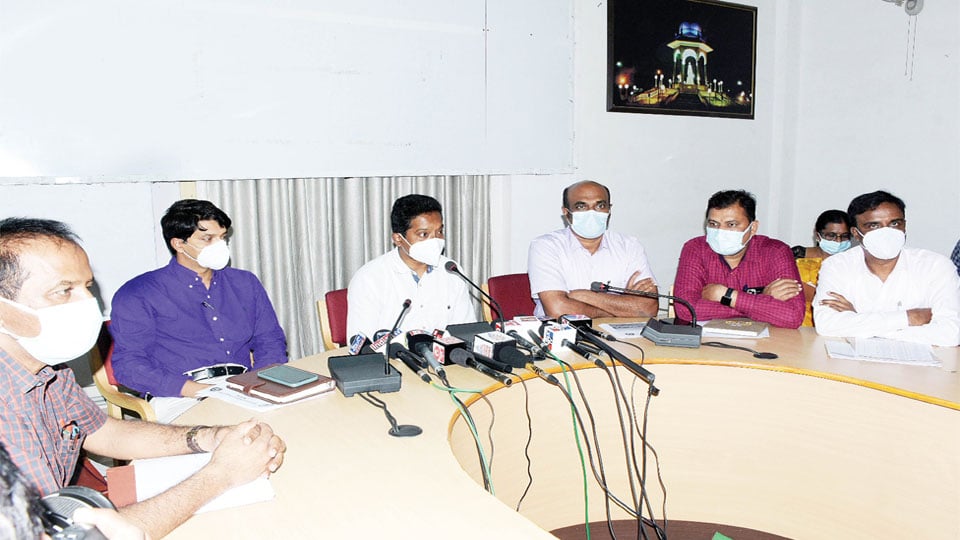 Mysore/Mysuru: Faced with the looming threat posed by the Omicron variant of COVID-19, the Department of Health and Family Welfare has been instructed to substantially increase the second dose coverage by the end of December. This is due to rampant vaccine hesitancy and in Mysuru alone more than two lakh people above 18 years — that is 35 percent of the population — have skipped the second dose.

“We are working towards enhancing second dose vaccination coverage expeditiously but unfortunately many educated people are hesitating from taking the jab,” said Mysuru DC Dr. Bagadi Gautham. He was addressing a press conference at his office last afternoon on the COVID situation in Mysuru, the Omicron threat and also the vaccination coverage.

In the Mysuru City Corporation (MCC) limits, over 1 lakh people have not received their vaccination despite many awareness campaigns including door-to-door facilities, he said.

“All the Primary Health Centres (PHCs) and vaccination booths in all the three Assembly Constituencies have conducted aggressive campaigns and all the Departments had joined together with voluntary organisations. We were happy to see long queues in front of the vaccination centres. But all that was the initial hype and after an 84-day gap, the queues disappeared,” he revealed.

“In Mysuru city, an average of 40,000 people from all the three Constituencies are yet to take the second dose and the first dose is due for around 1 lakh people. It has become a worrying factor as people have become hesitant to get vaccinated. I am urging them to become responsible and get themselves vaccinated soon for their own safety and the safety of others,” he said.

“Vaccination with two doses is the only answer to the pandemic and all its present variants. If you are vaccinated, the intensity of the infection is scaled down. The severity will be less and the chances of fatality will be less in case of hospitalisation,” he explained.

Over 63.64 percent of people have got their second dose and if people cooperate, the administration is ready to take the percentage to 100 in the next two weeks. There is a stock of 3.85 lakh doses of vaccines and the health staff are fully geared up to step up vaccination, he added

No Omicron cases in Mysuru

Replying to a question, DC Dr. Bagadi Gautham said that the samples of 72 COVID-19 positive nursing students of Mysuru were sent for genome sequencing and they have detected a regular COVID-19 strain. The new Omicron strain has not been detected and in the two cluster cases, all the students are safe and are being treated.

“No strain of Omicron has been detected in Mysuru and we have taken all possible steps acting on the Government instructions to step up surveillance on the inter-State borders,” he revealed.

He added that 1,120 primary and secondary contacts of the infected nursing students have been traced and tests conducted on them proved negative. They would again undergo RT-PCR test on the 7th day (from the day of test) as per the Government norms.

Mentioning that all Government orders were being followed stringently especially at the borders, he said, “At the Bavali check-post, we are maintaining a strict vigil. In the last 10 days, we sent 160 vehicles back for not following the RTP-CR test rules. In the last one month, we conducted 90,734 tests and the positivity rate is 0.83 percent. On an average, 20 to 25 positive cases have been detected since the last one-and-a-half months. Last week, the positivity rate was 0.97 percent,” he said. MCC Commissioner G. Lakshmikantha Reddy, ZP CEO A.M. Yogesh, District Health Officer (DHO) Dr. K.H. Prasad and others were present with the DC.