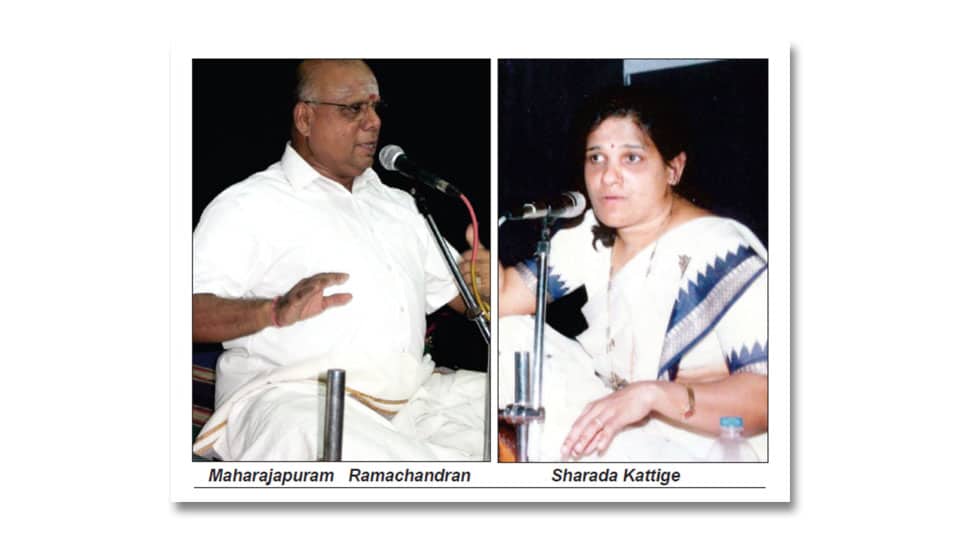 On the 9th of this month, Vidu. Sharada Bhat Kattige will present a Hindustani Vocal concert with  Pt. Ramesh Dhannur on tabla and  Pt. Veerabhadraiah Hiremath on harmonium.

Sharada Bhat has done her MA in Music & Vidwat in Hindustani Music. Her father Subrahmanya Bhat Kattige from Honnavar was her First Guru and motivator. She has since been quenching her musical thirst under various stalwarts in the field such as Sri Shadakshari Gawai, Sri Chandrashekar Puranik Mutt of Dharwad, Sri Parameshwar Hegde of Bengaluru, Indudhar Nirodi of Mysuru and SCR Bhat of Mumbai.

This apart she is also trained for Light Music under Vasanth Kanakapur. She is regularly performing in various prestigious Sabhas and festivals across the country. The programme is an endowment by Iyengar Bros., USA.

On 10th December at 5.30 pm, Maharajapuram Ramachandran will present a vocal recital. He will be accompanied by C.N. Chandrashekar on violin, H.S Sudheendra on mrdangam and G.S. Ramanujam on ghatam. Maharajapuram Ramachandran, as his name suggests, hails from the famed Maharajapuram lineage, his grandfather being the late Viswanathnatha Iyer and his father  late  Santhanam. He also happens to be the seventh in line in the direct Shishya Parampara of Saint Thiagaraja. This solid background has helped him earn a name for himself and carve a niche as the authentic heir of the Maharajapuram style. Strict adherence to tradition has earned him several awards and titles from prestigious sabhas in Chennai. He has been awarded the title of Sangeetha Choodamani by the Krishna Gana Sabha, Chennai in year 2007. He is the Aasthana Vidwan of the Dayananda Ashram at Saylorsburg, PA. The Swamiji of the Ashram has bestowed upon him the title of Aarsha Kalaa Bhushanam in 2007 at Chennai. Ramachandran, who has graced the SIMA stage before, is a Grade “A” artiste of the All India Radio and Doordarshan. This is an endowment programme sponsored by  Dr. Prathibha, Padma and Monica.

On 29th December at 6 pm, Soumya Govinda Naidu from Qatar will present a Bharatanatyam recital with Dr. Lakshmi Rekha Arun and Maithreyee Gururaj. Vidushi Sowmya Govind Naidu is a multifaceted danseuse  born to a cultural family G.K. Sampath Kumar and Vijayalakshmi. She is settled in Qatar with her husband Govind Naidu. She was initiated to Bharatanatyam at the age of six under the guidance of Natyarani Shantala Dr. Vasundhara Doraswamy. She has undergone more than two and half decade training under her Guru. She has topped in the State board Junior, Senior and Vidwat examinations. She has participated in several State and National-level competitions crowned with first place. She has participated in the international cultural exchange programme in China, Hong Kong and Thailand. She is a Doordarshan artiste and also a Yoga exponent trained by Dr.Vasundhara Doraswamy. She is a committed Guru and connected with Skill Development Centre [Centre for Performing Arts and Visual Arts, Qatar]. Vidu. Sowmya Govind Naidu will present Bharatanatya along with Vidu. Maithrayee Gururaj and Dr. Lakshmi Rekha Arun from Bangalore.

Dr. Lakshmi Rekha Arun is a dentist by profession and a gold medallist. She is the Founder-Principal of Laasya Academy of Dance, Bengaluru. She started learning Bharatanatyam at the tender age of five under Raman from Tumkur. Since 1989 she is under the tutelage of internationally acclaimed Guru Dr. Vasundhara Doraswamy.

She has completed the Junior, Senior and Vidwat  examinations conducted by KSEEB with distinction. She is a graded artiste of Doordarshan, learning Karnatak Classical Music from Vidu. P.V. Malini and Vidu. Saraswathi and presently under Dr. Chintanapalli  Ramesh.