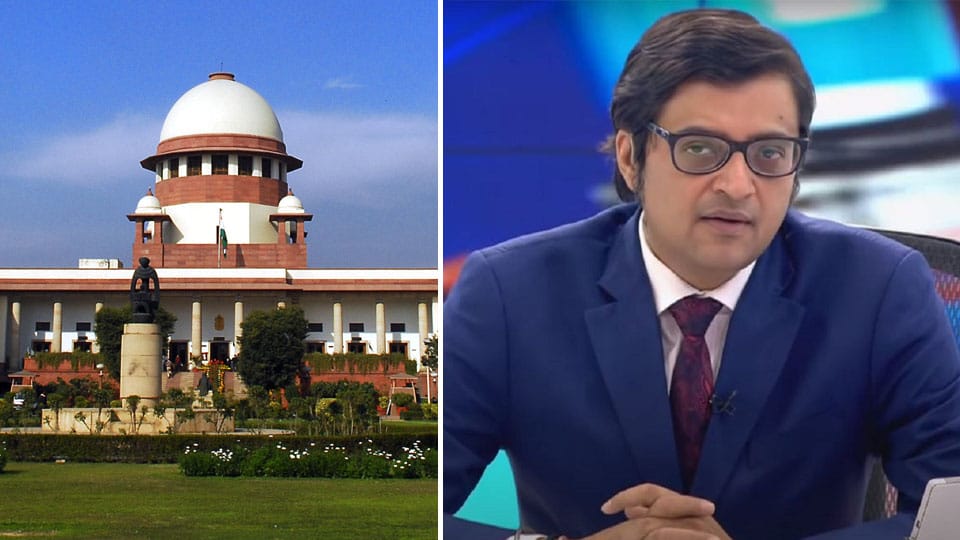 Two drops of tears rolled down my cheeks at 4.15 pm yesterday, Wednesday, 11th November, as I was watching the Republic TV. It was the moment the Supreme Court announced the grant of bail to Arnab Goswami, Chief of Republic TV. As we know, he was jailed for the last eight days in a case of ‘abetment to commit suicide’ which was closed in 2018 but suddenly ‘reopened’ by the present Uddhav Thackeray Government which is a coalition of Shiv Sena, Congress and Nationalist Congress Party (NCP).

I felt embarrassed, finding my eyes well-up and tears rolling down. I took a quick look at my wife who too was watching the TV from the corner of my eyes. She was engaged in clearing her wet glasses of the specs. Quickly, I wiped my tears. Both of us were speechless, choked with emotion surging from the heart.

The closed criminal case has two other accused also, who too were arrested, but they were not “star accused” like Arnab Goswami. They were tragically caught in the cross-fire between Arnab Goswami and the Maharashtra Government. They too were granted bail by the Supreme Court yesterday along with him but it was only Arnab Goswami’s incarceration that attracted all-India and even world-over attention. Surprisingly, a large number of Indian TV channels and newspapers chose to ignore this historic legal fight, in a democratic country, between the media, known as the ‘Fourth Pillar’ of Democracy, and the Power of the State.

Yes, before the Power of the State, the Power of the Media is of no consequence as we saw for the last eight days in the case of Republic TV which had taken on the Maharashtra State Government on many issues, mostly criminal. Thank God, there is the Supreme Court with Judges who would uphold the majesty of law and, in this unequal fight between the Media and the State, dispense justice in a way that would preserve and protect our democratic, secular polity. I salute our Supreme Court.

In contrast I remember the years 1975-1977 how the Supreme Court ‘upheld justice.’ I was reminded of this political and judicial aberration by Maj. General (retd.) G.D. Bakshi, who was giving his perception of this war of attrition between Arnab Goswami and the State of Maharashtra. He rightly mentioned the names of famous constitutional advocate Nani A. Palkhivala and the Supreme Court Judge Justice H.R. Khanna. I remembered Palkhivala, who was defending Indira Gandhi in one case, returning the case file to Indira Gandhi when she declared the Emergency in 1975 and H.R. Khanna was denied of promotion (I think) as CJI as he did not co-operate with the Emergency Government. I guess, it is this kind of people who contribute to strengthen our Democracy and Secularism. Others, as L.K. Advani famously said of the Press (Media) that ‘they chose to crawl when they were merely asked to bend.’ I am reminded of this kind of   Media behaviours seeing the way a majority of media behaved in connection with this just war of the Republic TV with the Maharashtra State Power, which is apparently abused like in 1975. Let it be.

As could be expected in arrests of any VIP, from any field  of activity, here too we saw people protesting in different parts of the country in support of Arnab Goswami on seeing the Honourable High Court of Bombay refusing bail and the other two Lower Courts were also of no help. That was why poor Arnab Goswami went to the Supreme Court as the last resort for a freedom-loving citizen. Supreme Court is the Kashi among the temples of justice in our country. By the way, it was a sign of civilised behaviour on the part of those who were protesting that there was no arson, looting and violence, we usually see when protests take place.

Having seen our Law Courts from close quarters since 1960, I should say this time Arnab Goswami was lucky to have a person of the stature of Justice Y. V. Chandrachud to dispense justice without postponing the ‘Judgement Day’ to another day like it happened in CJM’s Court, Sessions Court and Bombay High Court. It is rightly said, no matter what the judgement is, but ‘Justice delayed is justice denied’ to the litigants.

Honestly, my hope for Arnab Goswami’s release from jail began to wax the moment I heard of the composition of the Bench comprising Justice Chandrachud and Justice Indira Banerjee. My hopes were not belied. After all, no matter what ‘system’ we have put in place for just and efficient administration, its efficacy depends on the individuals who head or work for the system. Which is why we need people like Justice H.R. Khanna, V.R. Krishna Iyer (who famously declared from the Supreme Court Bench that ‘Granting bail is the rule and jail is an exception’) and now Justice Chandrachud. May the tribe of this kind of Judges increase in all our Law Courts. Such Judges are the salt of the earth, as Bible says.

For now, all the best to Arnab and may the State Power be used keeping in mind the Democratic principles of ‘checks and balances’, giving up totally the temptation for vindictive exercise of the State Power.

Interestingly, the BJP Spokesperson Sambit Patra  said on TV that Arnab Goswami would be the Nelson Mandela of India who fought for ‘Freedom of the Press’ which also means Freedom of Speech and Expression of a citizen of this democratic and free country under the Constitution.

3 COMMENTS ON THIS POST To “Two tear drops for Arnab Goswami, wounded journalist”