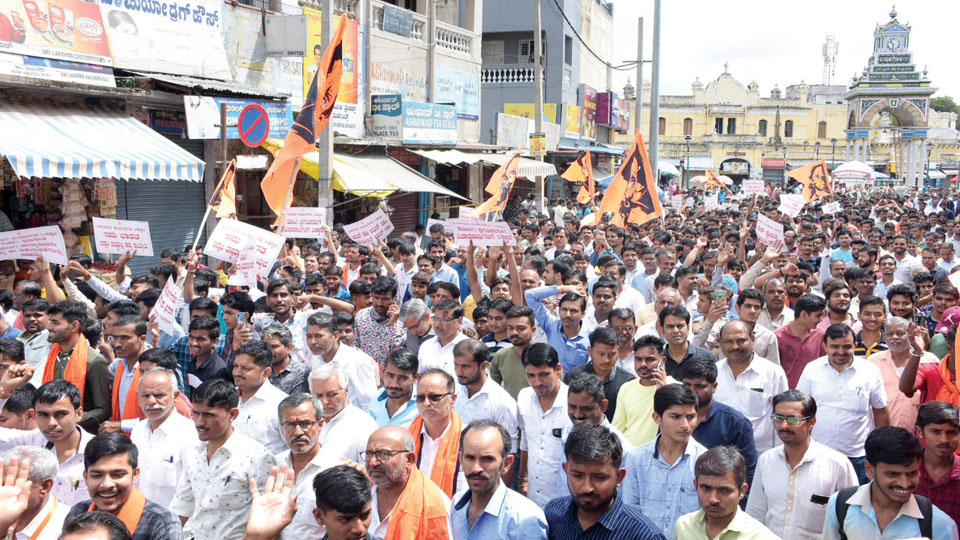 Mysore/Mysuru: Strongly condemning Rajasthan’s Udaipur incident where a tailor was brutally beheaded, hundreds of members of various Hindu organisations and traders of Marvari community from Rajasthan and Gujarat, took out a massive rally in city this morning, urging the Government to ensure that such incidents do not recur and to further strengthen laws against terror activities and such other heinous acts against humanity.

The rally, which commenced from Gandhi Square in the heart of the city, passed through Dufferin Clock Tower, Shivarampet, D. Devaraj Urs Road and JLB Road, before reaching the Deputy Commissioner’s Office where a memorandum was submitted seeking justice to the family of tailor Kanhaiya Lal, who was recently beheaded at his shop in Udaipur by some miscreants for allegedly supporting the post of expelled BJP functionary Nupur Sharma.

The protesters urged the Government to publicly hang the culprits and to ensure that such horrifying incidents do not recur ever again in the country.

Claiming  that the killers of Hindu activists such as Kyathamaranahalli Raju of Mysuru and others  elsewhere in the State were out on bail,  they wanted the Government to take stringent actions to prevent assaults against members of the Hindu community.

MLA L. Nagendra joined the protesters at the DC’s Office.

The Marvari traders opened their shops for the day in the Central Business District after the rally concluded and submission of memorandum at DC’s Office.

10 COMMENTS ON THIS POST To “Udaipur beheading: Hindu organisations and traders take out joint rally”