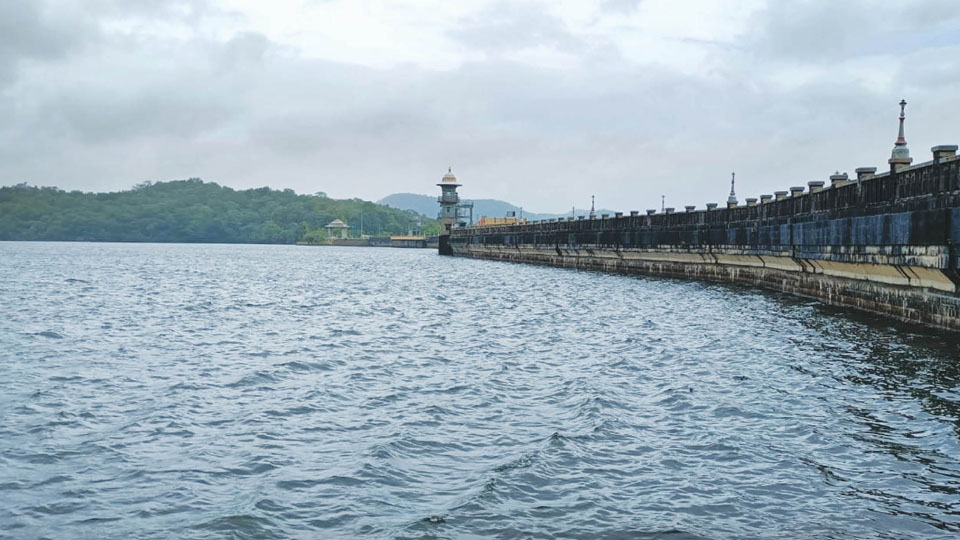 10,000 cusecs of water to be released by this evening

Kushalnagar: Barely 10 days after the setting in of the South West Monsoon in Kodagu district, the Harangi Dam in Somwarpet taluk has filled to the brim and today morning, 1,200 cusecs of water has been released to the river that will reach the Krishna Raja Sagar (KRS) Dam in Mandya.

By this evening, the outflow will be increased to 10,000 cusecs and all the residents living in the downstream and by the side of the river have been asked to move to safer places as the water release will only increase in the coming days. The reservoir touched its maximum level of 2,859 ft. and to mark the occasion this morning, Madikeri MLA M.P. Appachu Ranjan offered  traditional ‘Bagina’ to River Cauvery after performing puja to the statue of Goddess Cauvery at the reservoir.

The ‘Bagina’, placed on the traditional ‘Mora’ contained saree, blouse, flowers, fruits, bangles, arashina-kumkum and rice. The rituals were led by a team of priests. Soon after the Bagina offering, all the four gates of the Harangi Dam were opened and over 300 cusecs of water were released from each gate, taking the total release to 1,200 cusecs.

Harangi Dam Assistant Executive Engineer told Star of Mysore that after the release of 1,200 cusecs, the Dam level stood at 2,857.17 ft. “We have an inflow of 17,000 cusecs now and we will increase the outflow by 10,000 cusecs by evening. In fact, we cannot release the 10,000 cusecs at once due to the Dam safety. We will release the water in stages,” he said.

More than one tmcft (one thousand million cubic feet) of silt has accumulated in the Dam and there is an urgent need to remove silt to increase the water storage capacity.

Though the Karnataka Engineers Research Station (KERS) conducted a survey of the river to ascertain the amount of silt deposited in the Dam and accordingly, the Cauvery Neeravari Nigam Limited (CNNL) has prepared a Detailed Project Report (DPR) for Rs. 130 crore for removing silt, the project is yet to see the light of the day.

In November 2020, the State Cabinet had accorded administrative approval to release Rs. 130 crore to remove silt from Harangi Dam but the works have not yet begun and the issue has taken a backseat now.